While videogames tackle a lot of pretty heavy subjects, some topics seem to be taboo. Things like death, pregnancy, and suicide are rarely (if ever) focused on in the virtual world.

Once and a while, though, a game will come along and treat these “mature” subjects with respect, never blatantly adding them in for a little extra shock value or to sell a few more copies on controversy alone. While the inclusion of these subjects may be a risk, when used correctly, the benefit to the overall emotional impact of the game is sometimes staggering. It is much easier to relate to a videogame character with real world problems, right?

One game that actually touches on all three aforementioned “taboos” is Final Fantasy VI for the Super Nintendo. Not only does this game feature some of the richest and most complex characters in the history of videogames, it tackles some issues that, at the time, had never been even hinted at in any other games preceding it.

Arguably the most powerful and heart wrenching scene of the entire game takes place on a sad, lonely island about halfway through the game. Let’s revisit this stunning sequence and see why Final Fantasy VI is deservedly ranked as one of the greatest videogames of all time.

Since another moment from Final Fantasy VI has been featured in this segment before (it is the first game to make a second Memory Card appearance!), you can read here for more on how the game starts and a little of the back story surrounding the game’s ever stretching mythology. 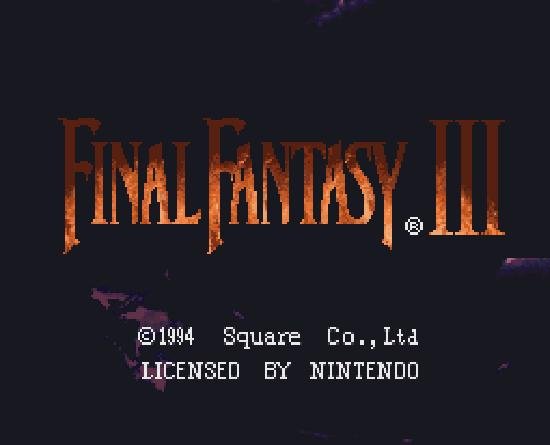 To quickly summarize: Final Fantasy VI is epic and includes a giant cast of amazing characters.

One of the best characters in this amazing cast is Celes. Considered a traitor by the evil Empire, Celes is being tortured in a dungeon when she is saved by the friendly thief Locke. Once free (and after joining your party), Celes forms a very close relationship with her rescuer, the game even hinting about some kind of romantic link the two may share. 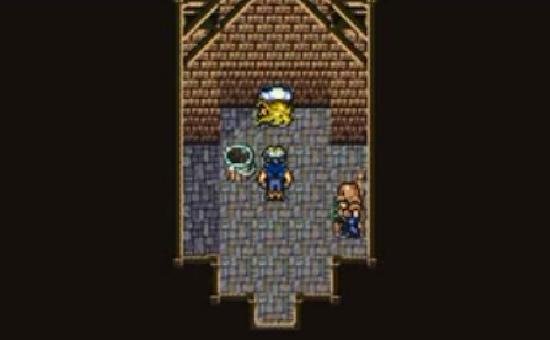 As your large party journeys farther and farther through the game, they are eventually captured by Emperor Gestahl (the leader of the Empire).

Before all hope seems lost, though, everyone is saved by one of Celes’s old companions, Cid, a researcher for the Empire. Though his act is noble, after saving the party Cid is forced to flee the clutches of the Empire and go on the run, afraid that his life is in danger for his betrayal. 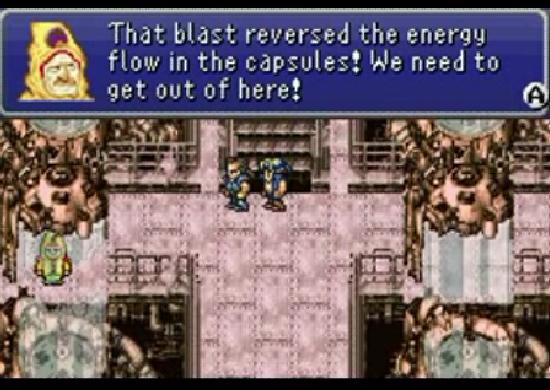 Although your conquest seems to be on the positive track to victory, all hope is lost once Gestahl and his apprentice Kefka come in possession of the Warring Triad, three Esper statues with the power to take over the world (I know, this is getting complicated – but hopefully it will supply you with more motivation to play this masterpiece for yourself).

Using these magical statues, Gestahl and Kefka create a giant floating continent in the hopes of raining destruction upon the helpless world below. 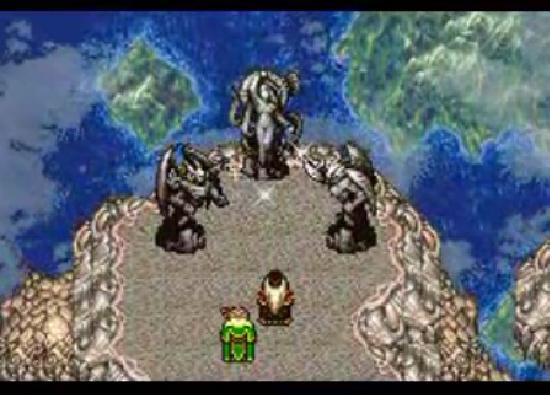 Fortunately, using a trusty airship, your party finds a way onto the floating continent and quickly looks to destroy the malevolent Emperor.

As your party prepares for, what you (as a player) think is, the final battle, their plan is thwarted by the apprentice Kefka, who kills his master Gestahl and moves the Warring Triad out of alignment. And if you know anything about the world of fantasy, moving anything out alignment is always a bad thing.

So, instead of the epic final battle you are expecting to take part in, the entire world around you is destroyed. Even your own party is thrown in all directions, separated and assumed left for dead. 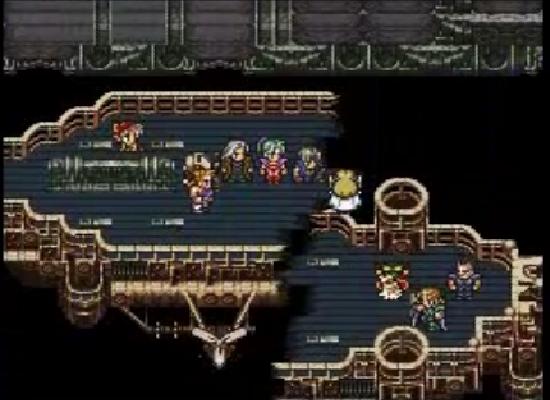 For people used to the heroes conquering all, this moment is shocking, to say the least.

As all of this chaos and destruction continues, the screen slowly fades to black and our next Memory Card moment begins: life on the .

As the screen stays black for an almost uncomfortable amount of time, the soothing 16-bit sounds of ocean waves crashing slowly grow louder in the background.

When the screen fades in, an island (in all its Mode-7 glory) is seen sitting in the middle of a vast ocean. The island is small and the world around it seems different, somehow feeling less alive. 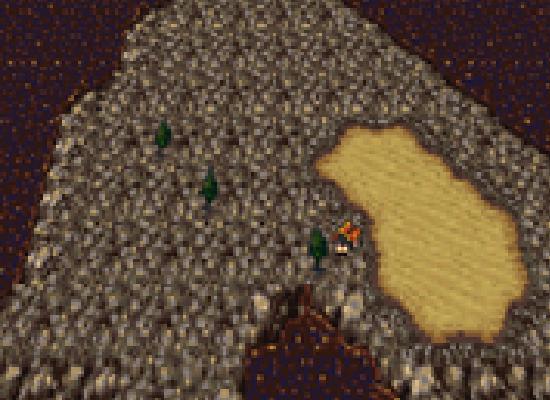 A small montage shows the beach of this island, quiet and serene, a sole cliff looking out over an empty world, and a tiny cottage sitting in the middle of the miniscule land mass. 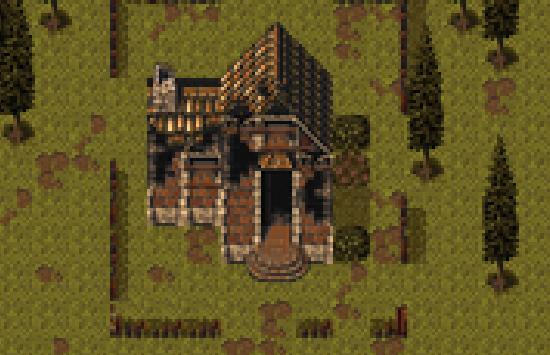 Inside the cottage, Celes is shown sleeping in a simple bed, one of the only pieces of furniture in the quaint domicile.

Tending to Celes is none other than Cid, her old friend and the researcher who helped you escape earlier in the game! He is shown cooking some food for Celes and caring for her obviously traumatized state. 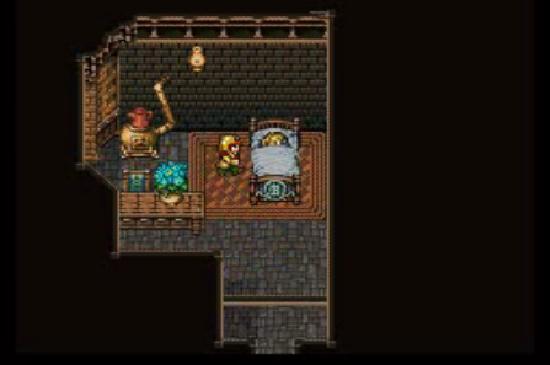 Almost unexpectedly, as Cid has his back turned to her, Celes gets up from bed and slowly wanders around her mysterious surroundings. She is obviously confused about where she is and what she is doing there.

Once Cid sees Celes moving around he runs to her side to make sure she is okay. He then tells her that she has shockingly been unconscious for a whole year and that they are the only two left alive on the solitary island.

Celes is blown away by this news, to say the least, and asks about her friends (the other members of your party). Unfortunately, Cid knows nothing of them and just assumes that they all have perished.

At this point, control is given back to Celes as the only member of your once huge party. 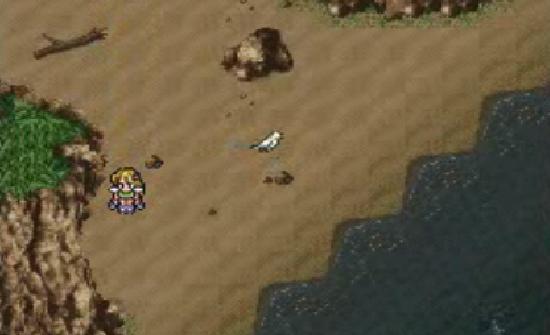 The player then has a major choice to make. You can wander aimlessly around the island until the next story sequence kicks in, fighting small, easy enemies, or you can focus your attention on helping to feed the now ailing Cid (who Celes lovingly starts to refer to as “granddad”). 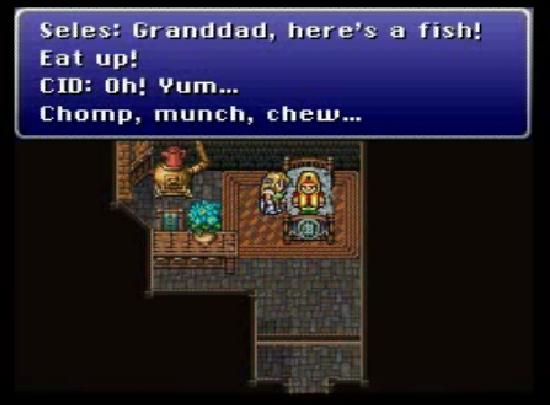 If you ignore Cid or feed him fish that aren’t good for him (which usually happens), your “granddad” will pass away, leaving Celes all alone on the island.

Devastated once finding out Cid is dead, Celes actually runs to the edge of the tall cliff on north end of the island and throws herself off of it, hoping the fall or the rushing current far below will kill her. 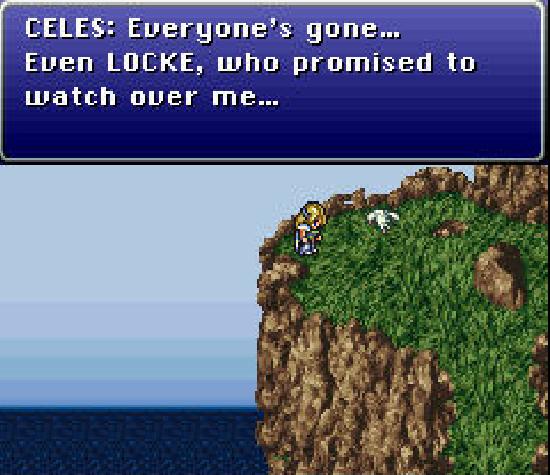 Lucky that the fates were on her side, Celes actually survives the fall and washes up on the shore, although battered and more than slightly bruised.

A bird of some sort wakes her up, a torn bandana wrapped around its neck. Celes, still a little dazed by her near-death experience, runs her fingers through the bandana, sure that it must belong to, who she thought was, long lost Locke. 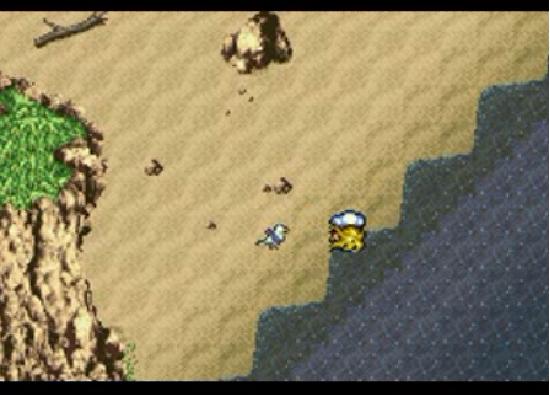 As the bird flies away, Celes journeys back into the cabin to say a final good-bye to her fallen friend Cid, determined to find a way off the island and into the company of her old friends. To her surprise, a letter is on the floor, which Celes immediately discovers is from her deceased “granddad.”

You must leave this island. Somewhere out there, your friends are waiting for you. Go down the stairs by the stove. The road to your freedom awaits … Granddad.

Stairs by the stove? Using this newfound advice, Celes thanks Cid’s peaceful body and heads down the secret passage at the back of the cabin.

To her (and your) surprise, a raft built by Cid is sitting in the hidden cellar. 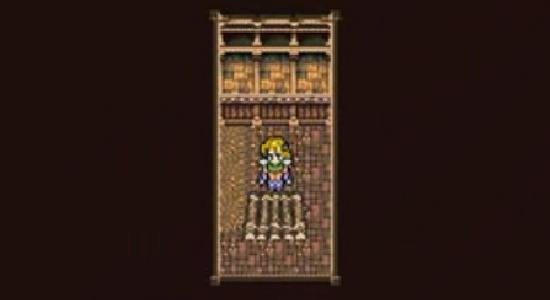 Using the last of her strength, Celes drags the raft into the ocean, finally escaping the solitary island she had been trapped on for more than a year.

Man, where do I even start on this stunningly beautiful and moving sequence?

First of all, in a time before Web sites and videogame magazines decided to ruin game length for you by revealing how many hours a game takes to beat before you even get to play it (*grumble grumble*), I genuinely believed that the battle with Gestahl and Kefka on the floating continent was the end of the game. Seriously, there was no reason to not think so: my entire party was complete, my levels were high, and the arching story had led up to this climatic moment.

Once Kefka killed Gestahl and destroyed the world around me I was completely floored.

After the screen went black, for a fleeting moment, I think I even expected a game over screen to fade up or the credits to begin rolling. Yeah, that would have been the worst thing ever, but I wasn’t in my right mind from the shock of the sequence.

Another brilliant move was to restart this second half of the game (the World of Ruin) with Celes. Not that Celes wasn’t a great characters (she is), it’s just she wasn’t really portrayed as the main character up until that point (that distinction would probably fall on Terra). It was an unexpected choice, but I can’t imagine it done any other way.

The choice of Celes as the first playable surviving character leads to what, I think, is easily the best part of this entire moment: the music. Each character in Final Fantasy VI has his/her own musical theme and Celes’s, well … hers might just be the best.

The other Memory Card moment concerning Final Fantasy VI focused on the Opera House sequence (maybe my favorite videogame moment ever). The music in that scene was pretty stunning, even holding up well today.

In the scene, once Celes finds out Cid is dead, the same theme from the Opera House starts to play. As the distraught former general runs up to the northern cliffs to commit suicide, the music crescendos, creating an amazing moment full of emotion, fear, and suspense.

And all of this is wrought … from a “simple” 16-bit videogame. That alone is pretty unbelievable.

To further gush over this scene, watch it one more time and pay attention to something most gamers seem to ignore: the direction.

Take this scene for example. Little things, like the way Celes’s sprite pauses several times before moving towards the cliff or the way the scene fades around her as she finally jumps, are a huge testament to the care and attention that was put into the final product. With a bad director, none of these little details would be included and, who knows, the entire scene could have fallen apart.

There are only a rare handful of moments in videogames where everything comes together perfectly, and the sequence from Final Fantasy VI is one of them. Sadly, as more and more pre-rendered cutscenes take over modern games and, admittedly, impress with their high polygon counts and realistic animations, emotionally beautiful moments like Celes trying to commit suicide are slowly becoming just a memory.

I miss all the elegant simplicity already …