Assuming you’re all caught up with Part 1, Part 2 of this analysis brings up how the way we discuss and perceive The Witness has been warped by its hype, and the media portrayal of both it and the primary game designer, Jonathan Blow.

I’m Sean Han-Tani-Chen-Hogan, and am currently developing the adventure platformer game, Even the Ocean, with a friend, Joni Kittaka. We also made the game Anodyne.

Part 2: The popular perception and influence of The Witness 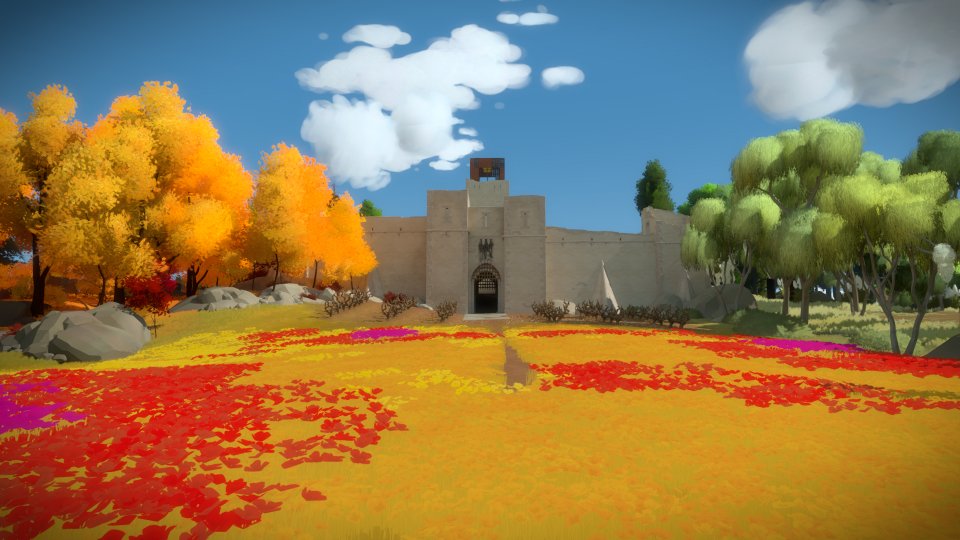 Of course, we haven’t even talked about what might be an elephant in the room: as far as this essay is concerned, up to now, it’s basically ignored the fact that:

The rhetoric around The Witness‘s reception by critics and fans – mostly positive – seems to reaffirm that the decision to spend so much time and money was a good thing. Often I hear the quote from Shigeru Miyamoto, “A delayed game is eventually good, but a rushed game is forever bad.” Is that really always the case? Let’s keep that in mind through the next few paragraphs.

One article by a journalist mentions his experience with the 2016 The Witness and 2011 The Witness. To him, the puzzle aspect of the game largely felt unchanged:

“I’m fairly sure that, when I played the game all those years ago, there was a podium outside these gates with a narrator’s voice on it, explaining why we’re here. Instead, there’s just a ton more foliage.”

The differences between the two versions were that in the final game, concrete narratives were struck away and replaced by audio logs of quotes. The biggest change to him was the improved and detailed art style, going from crude and rough to impeccably realistic – more foliage. To work towards its goal of creating an ‘area for contemplation,’ The Witness seems to have shifted much of its work hours towards improving the visuals of the game and removing a focus from a traditionally authored narrative. I think it is safe to say that in doing so, The Witness‘s narrative and world, as a result, is not what people would call ‘political’ – it doesn’t explicitly deal with ideas like race, gender, and class. 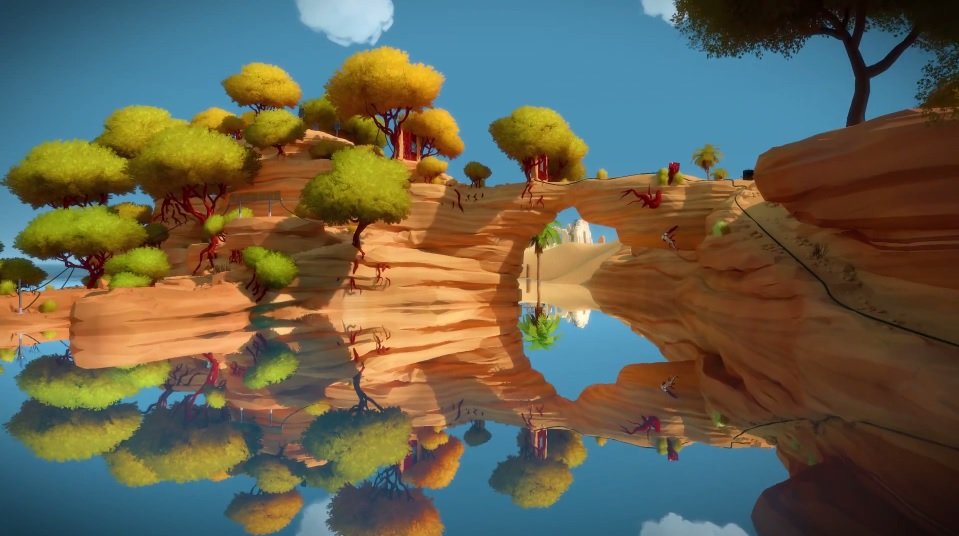 As artist Hito Steyerl mentions in an essay about the politics of labor in the contemporary art world,

“Art is not outside politics, but politics resides within its production, its distribution, and its reception.”

“If contemporary art is the answer, the question is: How can capitalism be made more beautiful?”

She wants us to remember that even if a game is not what we traditionally deem “political” – aspects in how the game is made, how it influences how people talk about it, and how popular it is, even what it chooses *not* to talk about – should be considered political. This is interesting – what happens when we apply these ideas to The Witness?

This game perhaps only strives for a few things like polished visuals, good puzzles, and a light narrative with themes that are arguably shallow. Because it’s had so much money and labor put into it and had a very vocal creator with a previous game that did well, it has inflated the perception of the game beyond that of just the game.

Because of the narrative around the game’s creation – that it was created by a “genius,” people are seeing it as something profound, something amazing, something to aspire to. Some feel the game proves that “games are art,” and that much of the game is or feels “beyond understanding.” It’s nice for people to have something to inspire them. But what does it mean when this inspiration is lauded as the most important inspiration, compared to any other given games? It goes beyond the normal entertainment kitsch of most games – the shooty-shoots, the collectathons, and so on.

But, the game is playing into an ages-old dynamic of what’s safe and acceptable in the art world. Art that is ‘universal,’ that tries to reach beyond boundaries of race, class, gender… art that considers those boundaries as trivial, that tries to make universalizing statements believing that we don’t need to think about these problems – how men feel emasculated when they can’t live up to a standard saying they need to be confident, women feeling unsafe on the street, and so on. That we don’t need to think about these issues in order to progress the human race. Art that, I suppose, can make capitalism seem ‘beautiful,’ by washing away the blemishes.

The Witness is talked about as if it’s this formula towards making worthwhile games: a single creator, lots of money, a strong vision. It is talked about as if this is some ideal, that the best ideas are those that ignore certain topics or ideas. The Witness‘s existence and the way people talk about it continues to support that being a ‘genius’ is worthwhile and healthy. It is largely unaware or ignores that it does this. It seems to forget the cultural power it has to change this narrative about games and art.

The Witness continues to support the myth that less people, more money, and more time, necessarily equates a better game, supporting that a visually beautiful thing can be okay to spend money (from millions of players!) on. That it’s okay to pad out an insecure core with millions of dollars of pure spectacle. 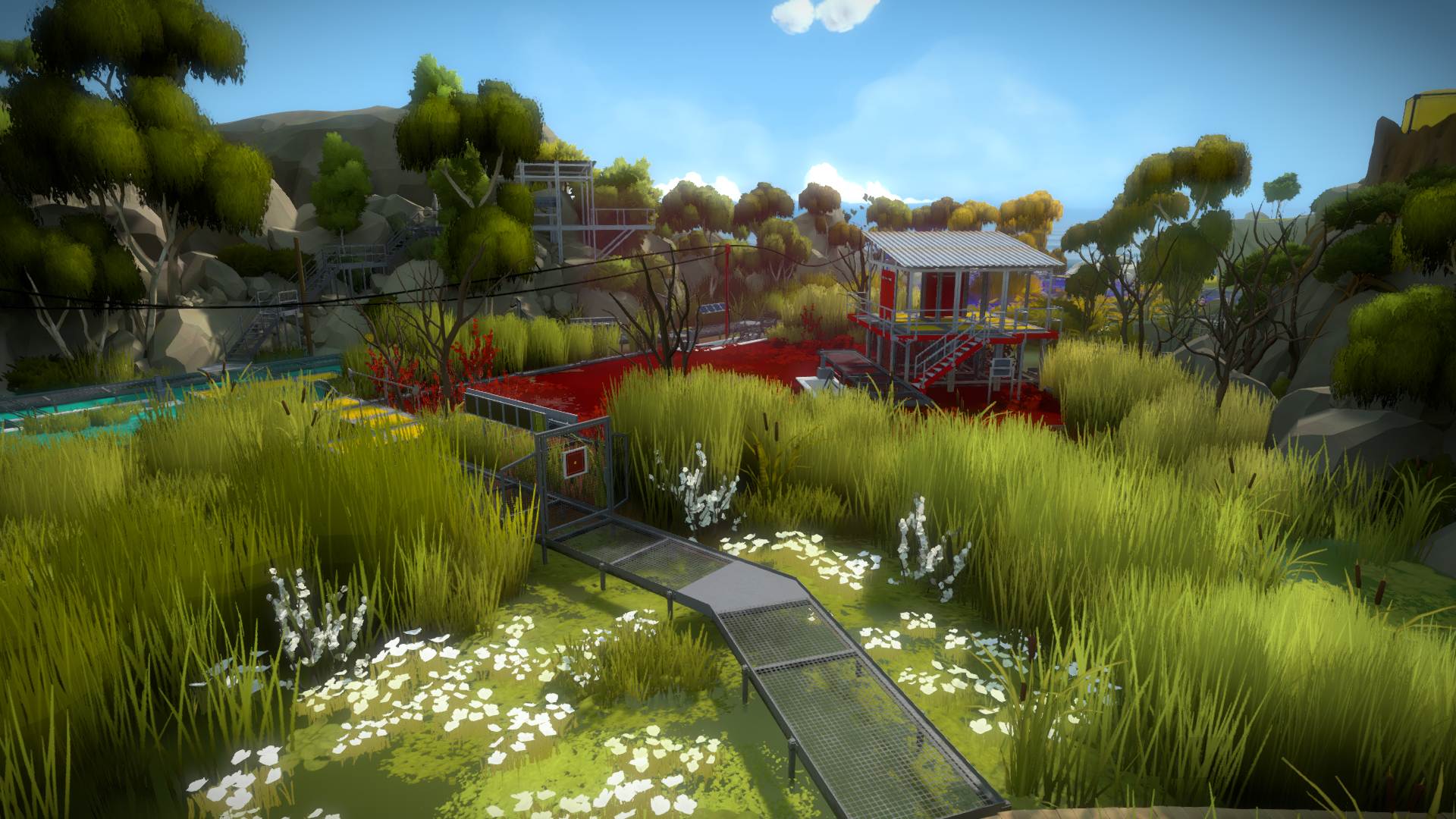 It supports the idea that the best messages are those that don’t get caught up in ‘politics,’ even though it does not directly argue that itself. It supports the idea that good games are those built up from locking yourself away, working incessantly. And at its core – in that tiny little audio log – there’s this speck of insecurity. As if the game knows that it is just putting all this visual fluff on top of a core it isn’t happy with. Is that what ‘genius’ leads to? It seems unhealthy – sad.  Yet this behavior is praised, upheld by the media. The Witness makes no attempt to criticize this problem with the dynamics of popular culture.

That feels disturbing to me, as I know many talented artists/game developers making little or no money from their art or games, and can’t be a ‘genius’ in this way. People who can’t spend all that money for all that visual, polished fluff. The idea that human drama is too commonplace, that a worthwhile thing to spend millions of dollars on is a beautiful island with good puzzles, that the best we should aspire to is attempts at universal statements about humanity. How does holding that as an ideal influence our future?

This culture we’ve created – and that The Witness, a powerful game, condones – implies that if you can’t meet the conditions of ‘genius,’ then you might be able to make something good, but you’ll never be as good as games that have a lot of money, have a single vision, have a lot of time spent on them. What does this mean for developers, artists, people trying to make a living, their self identities – unable to meet this standard for ‘profound’ art?

It is a philosophy that leads us to idolize some particular creators, and forget everyone else. It’s a view of the world that can’t see that all art is influenced by philosophy, other media – not just ones that happen to cut and paste some quotes and videotapes into it. It’s a view of the world that sorts us into geniuses and non-geniuses, only conferring the title of genius to those who go through the motions and rituals of appearing as one. It leads us to continue being a surface-oriented, visual-primacy society, doomed to ravages of advertising, focus on individual accumulation, distrust of others.

Thanks for reading this far! If you like my writing, you can find more over at Medium. If you’re interested in my games, check out my current one, Even the Ocean, a longform, narrative-driven adventure platformer coming out summer 2016.

In Part 3, I will talk about some games that I feel succumb to this ‘genius narrative,’ or have drawbacks from having one creator, like FEZ and Undertale. I also mention few games that benefit from the one-creator model of creation. I also conclude the essay with some general thoughts on consumption and creation in games.