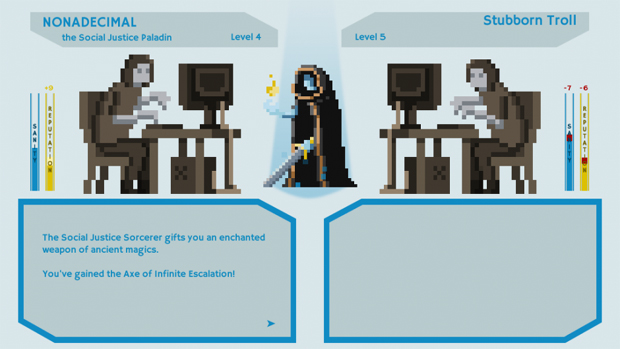 Eric Ford was working in game development back when he was still in college, but not in the way that you might think. He wasn’t just another kid fooling around with Flash or GameMaker in his spare time. He was working for Monolith on The Matrix Online. In fact, for some, he was The Matrix. It was his job to write in-game scenarios and puzzles, and actual perform as NPCs in the massive multi-player online game. The lines between reality and internet, and between playing the game and being the game, were often paper thin.

In discovering Eric’s past in The Matrix, it made all the more sense that he would go on to make a game like Social Justice Warriors. So many people today treat Twitter like a game of moral/social superiority, spending hours a day attacking anyone they deem different and/or emotionally threatening like they would an enemy NPC, using words to try to evoke shame, guilt, or other negative status ailments. We talked all about that phenomena, Eric’s past work in robotics, his plans for designing procedurally generated narratives, Black Ice, and a lot more.

Thanks again to Eric for hanging out with us, and be sure to check out today’s show with Jordi de Paco of Deconstruction team (Gods Will Be Watching) at 4pm. It’s going to be a hoot!