The face of a compulsive liar

[How well do you know Mario? Just another innocent guy, trying to make a living with his everyday plumbing duties…right? NakedBigBoss see’s things a little differently ~ JuIc3]

We all know Mario, right? He’s the most recognizable face in video games. He has been around since the early ’80s. He’s been in approximately seventeen zillion games…and yet, even after all these years, can any one of us truly claim to KNOW who Mario is? Sure, he lists his profession as a plumber, but when have you actually seen him use a wrench?

We, the gaming public, have mostly seen him as an adventurer, saving Princess Peach hundreds of times. But have you ever seen him as a referee? A doctor? A typing teacher? He’s done all of these things, so what makes Mario, you know, MARIO? I did some deep investigative detective work and looked at Mario’s various professions throughout the years, in order to accurately describe him to someone who has just been birthed into the world. Here are my findings: 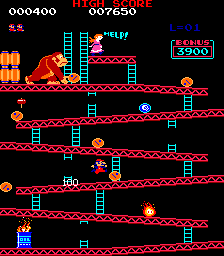 What kind of plumber has to jump over barrels and fire that is literally alive to best a giant monkey and save his beloved?!

Mario first appeared in a title called Donkey Kong back in 1981. Upon starting the game, Mario immediately has to deal with some bullshit. An enormous gorilla named Donkey Kong (not to be confused with King) climbs up top a construction site with a lady in his arms, stomps the shit out of some railings to make them crooked, and laughs like an asshole. Up top, the damsel named Pauline, Mario’s first love interest before he became obsessed with royalty, screams for HELP!

Once in control of Mario, the player finds fire coming out of OIL barrels and following Mario up and down ladders, wooden barrels unexpectedly bouncing down ladders instead of along the construction rails, and hammers with which to destroy said nuisances. Upon reaching the top, Mario is reunited with Pauline, and then is quickly heartbroken when Donkey Kong grabs her and goes on to the next stage. The following levels throw even more obstacles in Mario’s way, including pies, springboards, and picking up Pauline’s lost handkerchief, umbrella, and purse. In the end, Mario causes Donkey to fall and crack his brains all over the floor, and is reunited with his true love (for this one game, anyway).

Final thoughts – Donkey Kong is a pretty reliable indicator of what Mario will become for most of his games; mainly, someone who is really good at jumping and killing animals. Also, for someone whose job title is listed as “Plumber,” this is a pretty stressful first adventure. 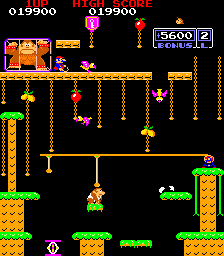 My, how the tables have turned

A year after his debut, Mario took on a far more sinister role. Not content with the permanent brain damage he caused Donkey Kong, Mario takes it upon himself to capture the beast, leaving his son, Donkey Kong Jr., fatherless. Jr. has other plans, however, as he climbs to the top of every level in order to break his dad out of his rusty cage.

DK Jr. has an opening that might actually explain how Mario has time for so many professions: Donkey Kong’s cage is lifted with a pulley by TWO identical Marios. Is the other Mario shown Luigi, and this is simply a hardware color limitation? Or does Mario have a twin we do not know of, that fills in for him during some of his many adventures/sporting events? My money is on the latter. 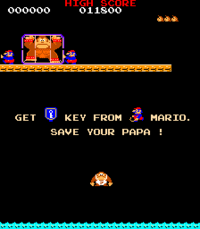 Every level, Mario cracks his whip, sending out weird gator monsters, birds, and sparks after DK Jr., which marked the beginning of Mario’s animal cruelty that we later saw with Yoshi in Super Mario World (always bopping him on the head, forcing him to eat spikey enemies, and just launching him into the abyss in order to jump higher). In the last level, DK Jr. prevails, carrying his dad to safety with his tiny baby hands while Mario gets a big boot from DK that simply says, “Get the fuck away from me and my family.”

Final thoughts – Donkey Kong Jr. shows Mario at his most sadistic, abusing animals and trying to break up families. This will become a theme throughout his adventures. 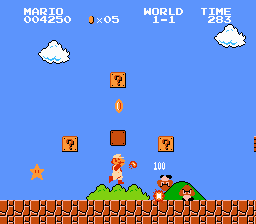 Did that Goomba have a family to feed? Probably

Super Mario Bros. was the game that put Mario on the map, as well as lay the template for most of his games. Mario had to run right in order to complete each level, while the screen moved forward with him, meaning he couldn’t return to previous screens. Was this Mario running towards his new responsibilities, mainly saving Princess Peach of the Mushroom Kingdom from the dreaded Bowser, while simultaneously away from his old ones, mainly fixing blockages from people’s sink pipes? I think so.

Throughout the game, Mario kills innocent sentient mushrooms that have been transformed into bricks by Bowser’s black magic. Yes, those bricks that Mario breaks for coins and power-ups are living beings. Could Mario hear the Toadstools’ muffled screams as he shattered them to pieces, or did he simply not know any better? You be the judge. After burning numerous fake Bowsers to a crisp and hearing that Princess Peach was in another castle more times than any person could bear, Mario finally rescues the princess, who immediately tells him to start his adventure all over again. Yeah, no thanks, princess; I think I’ve killed enough innocent lives.

Final thoughts – Super Mario Bros. is the first time we see Mario snuffing the lives out of the denizens of the Mushroom Kingdom. Knowing he murders so many Toadstools gives me chills even to this day.

Where did he get his medical license?

Dr. Mario is just…wow. Mario, by clearly using his famous status to bully people around, dons a medical outfit in order to see patients riddled with disease. Each person he sees has three different colored viruses affecting them, and Mario evaporates them by shoving pills of similar colors on top of them. Why does he not have help from someone who might, you know, be an actual doctor/nurse? Also, if we are assuming Mario is shoving pills down people’s throats, then what happens to all the pills that are left inside each patient that aren’t used to destroy the viruses? Simple; they all die due to suffocation. Mario, you goddamn monster.

Final thoughts – Mario continues his killing spree. When do the horrors end?

Mike Tyson’s Punch-Out!! and Tennis (1987 and 1984) – Supporting roles that still have Mario telling people what to do

Both Tennis and Punch-Out!! show us a more subdued Mario who takes a backseat to other characters. Tennis is just two players playing…tennis, while Mario refs and shouts things like, “DOUBLE FAULT.” Punch-Out!! follows a young man from the Bronx named Little Mac, as he rises through the boxing ranks in order for a shot to fight Mike Tyson. Mario counts downed opponents out and crowns the winner of each match. Nothing too terrible with Mario in these games, except that he lets boxers laugh at Little Mac if they knock him out, even if he has a brain hemorrhage and is dying slowly on the mat. 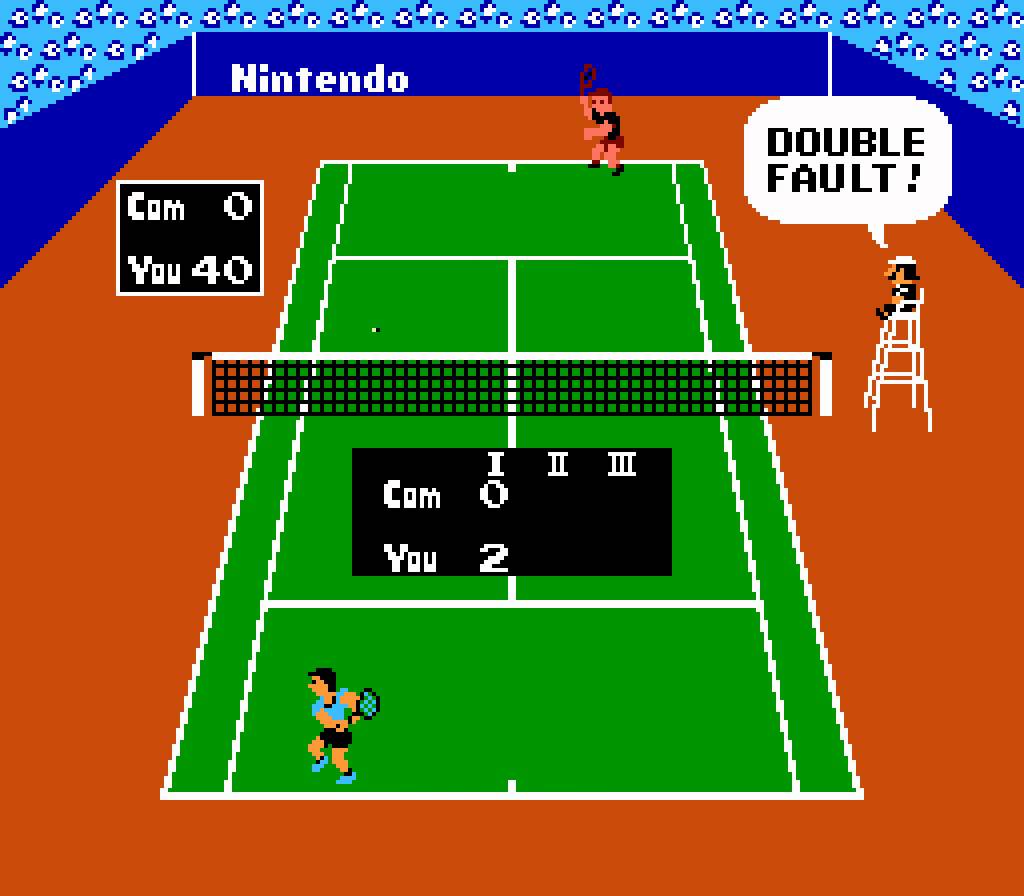 No need to shout, we can hear you just fine!

Final thoughts – Mario has taken a break from murder and landed a referee side job. As long as it ends the violence, even for a little while, I’m all for it. 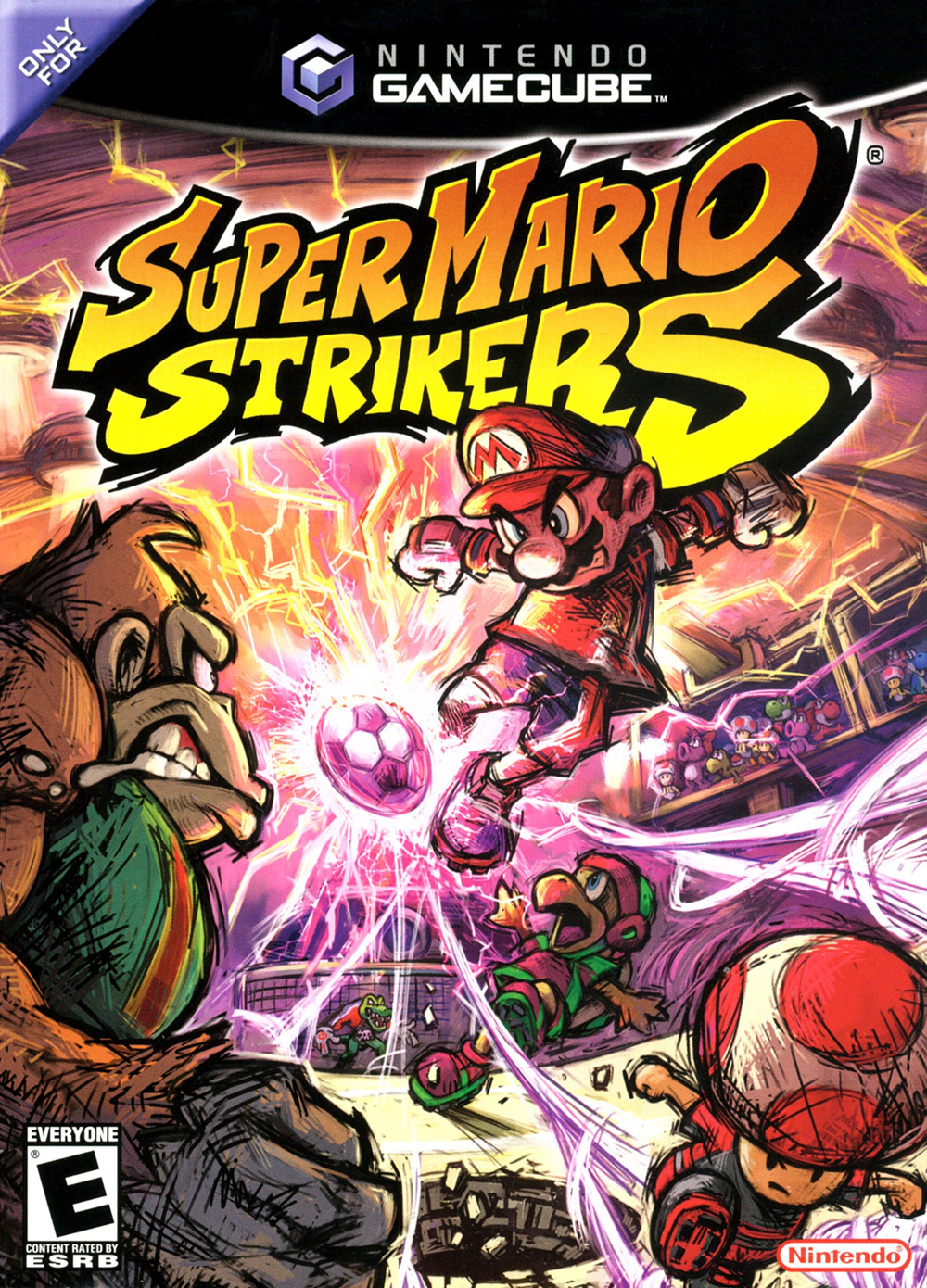 I learned one thousand sports in my spare time

During Mario’s downtime between adventures, he learned a metric shit-ton of sports. Whether it be soccer, tennis, or go karting, Mario became an expert at it, because he is a perfectionist dickbag. In every sporting title, Mario can outright destroy his opponents (especially with a soccer ball or blue shell). This is especially apparent in the Mario Party games, where Mario can steal stars from other players in the lead during Chance Time with an expressionless face that masks his evil heart. And in the Olympic Games, Mario got to race against his Sega rival, Sonic the Hedgehog. The fact that he can beat Sonic in a race shows that Mario has the power of Satan, because how else can you defeat the fastest thing alive?

Just chill the fuck out and have fun, Jesus!

Final thoughts – Mario is a Grade A bully when in competition with others. While everyone else is having fun, he still has to make it all about him. Disgraceful. 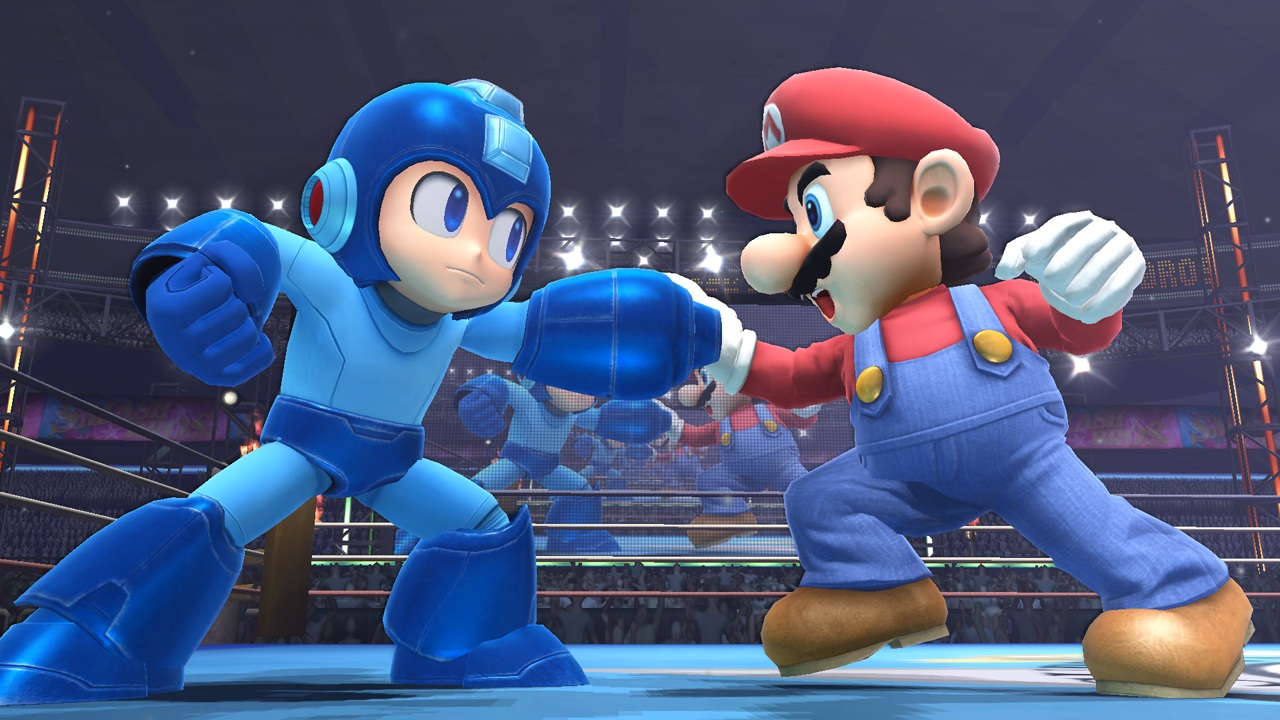 Not content to just take on Sega, here Mario tries to assert his dominance over Capcom’s Mega Man

In this popular fighting game, Mario and other characters from Nintendo’s various franchises (and even Capcom’s, Namco’s, Squeenix’s, and Sega’s games) get to duke it out and knock each other off of numerous stages based on their games. For once, Mario (IMO) is not the best character to choose. I find immense pleasure in choosing someone like Ryu from Street Fighter and decking Mario in the chin with a Dragon Punch, launching him into the stars. Super Smash Bros. is also a great title for revenge: various villains/allies that Mario has wronged throughout the years; including Donkey Kong, Bowser, all of Bowser’s kids, Yoshi, and Wario; can all line up and take out years of pent up rage on Mario’s mustached face. Sure, they could best Mario in the previous entry that included sports titles/board games, but never before could these characters wail on Mario’s dick/ass/entire body, bruising him for eternity.

Final thoughts – Super Smash Bros. is a great way to gain the upper hand on Mario, who has had it coming for years. 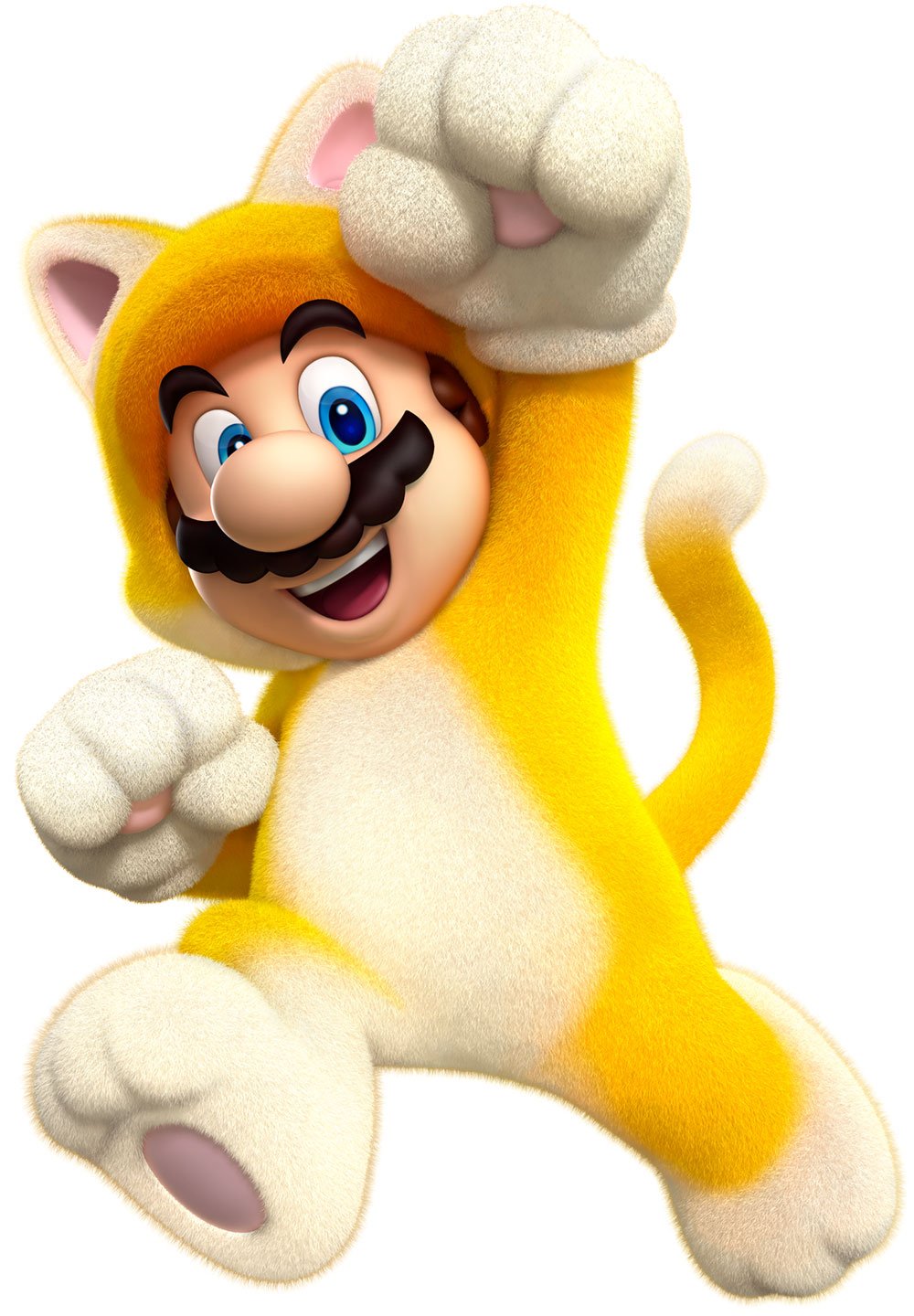 In the end, I think it’s clear that Mario is a complex character. He certainly wasn’t a very good plumber because I’ve never seen him fix a leak, but he’s a great adventurer. However, since his beginnings, he’s always had a lust for blood, whether on the way to rescue the princess or playing a friendly game of golf. And in his last adventure, he showed no sympathy towards cats, skinning them alive in order to wear their fur as a suit and use their claws to climb surfaces. Mario may have taught me how to type, how to go fish, and how all toasters toast toast, but in my mind he’s a narcissistic killer. Whether a doctor, referee, golfer, or raccoon, the one thing that has always been consistent about Mario is his aggressive nature. Try to remember that when buying his next title. 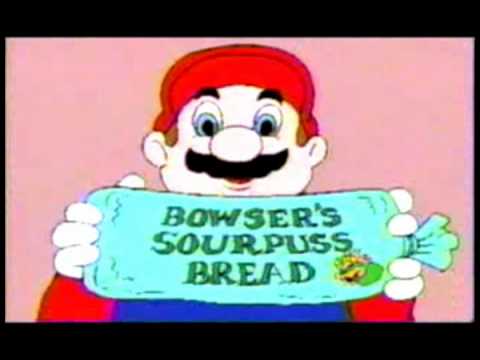