Since a lot of you seemed to like this month’s episode of The Journalism Show, I thought I’d steal Ashley’s idea and share a closer look at some of the artwork from it with you.

I want to thank everyone who commented for their kind words regarding the show yesterday. This project is an incredible amount of work and it’s very dear to my heart, so it really means a lot to me that so many of you enjoy it. I hope I can continue to make it a little better every time.

If you care to know, feel free to hit the jump for a peek at what went into the making of episode 2. 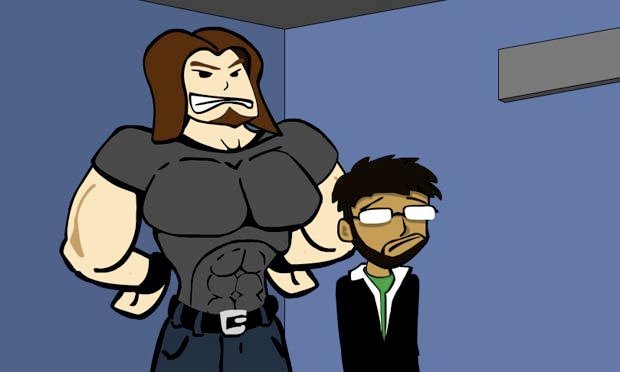 As I said yesterday, I did this episode for the Podtoid fans. There were a lot of podcast-related inside jokes in it, and to really drive it home I wanted to have a couple of the guys guest star on the show. I decided to go with Anthony, since he’s the host, and Brad, because well, he’s just an interesting character any way you look at it.

The idea for a Podtoid episode came the day after I published episode 1, when i drew Beedog with a popsicle in his mouth just for the hell of it. I thought it would be cute if the show started without him and he wanted that part cut out. If you listen to Podtoid, you understand that’s where Anthony came in. I had fun drawing these two, (Brad especially, making him so huge), and I’ll probably do more editor cameos in the future. 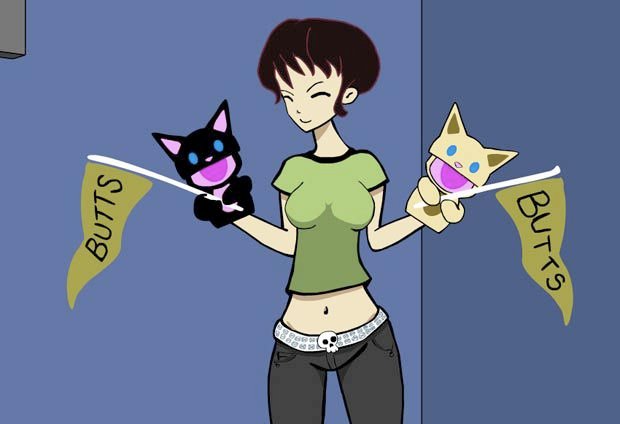 I wasn’t really happy with the way Mrs. Beedog was drawn in the first episode, so this is actually a brand new body for her. When it came time to animate, I had her hopping around in her typically static fashion where her legs never move, because I initially didn’t feel like going to all the trouble of a walking animation for a character who’s only on screen for a second and a half.

I decided that was lazy of me and I should animate her legs, but then it occurred to me that it might be even funnier if her boobs jiggled all over the place but the rest of her didn’t budge. I tried that out, and the result looked so incredibly silly that I left it that way. I’ll make her legs move next time, but just this once I wanted to leave it looking ridiculous because it amused me. 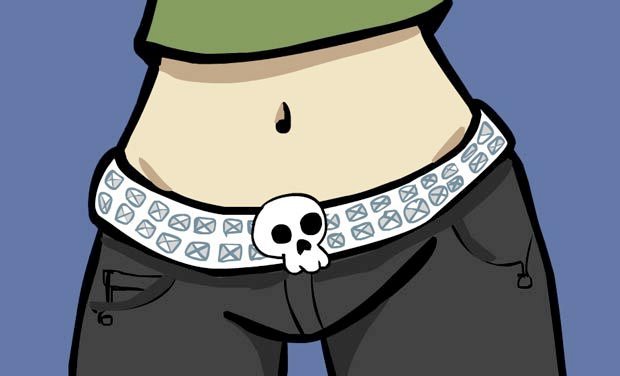 You might also have noticed that she’s wearing different clothes in this one. That’s something I want to keep doing; giving her a different outfit in every episode. (She is a girl, after all!) For this one, I decided to go with a kind of punk rock look and gave her a studded belt with a little skull buckle. 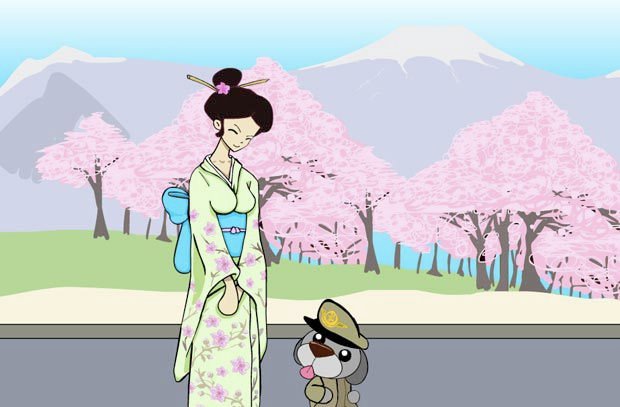 For the flashback, I obviously couldn’t have her dressed like that in 1948, so I made her a kimono with a sakura blossom pattern on it and gave her a more traditional Japanese hairdo. That kimono took me hours, so if she ever shows up in traditional garb again, that’s what you can expect to see. I was pretty happy with the look of the pastel colors, as I think it maintains the vibe of softness and gentle femininity I want her to have under her kind of rock ‘n roll exterior. 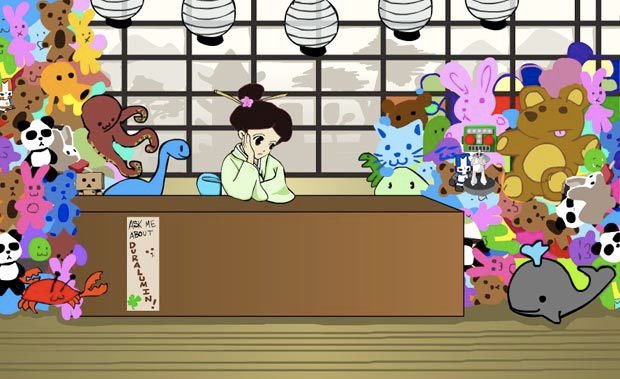 The idea I want to convey is that Mrs. Beedog has a massive weak spot for cute, cuddly things, which is why she was attracted to Geraldo and why I put her to work in an omochaya. I managed to work in a crab, a whale, an octopus (I like sea creatures) and a few others like Q*Bert before I finally said screw it and just copypasta’d the rest of the animals. I decided the “best teddy bear ever” would be Duralumin, as an homage to my favorite manga, Yostuba&!. 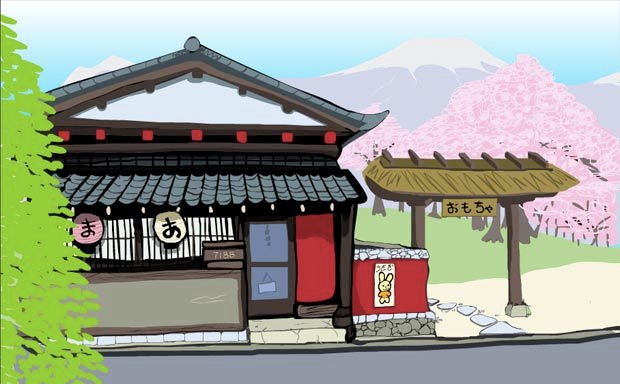 For the toy shop itself, I just went with a generic, traditional Japanese building. I was going to reveal later in the series that Mrs. Beedog had telekinetic powers, and having her burn down the toy shop and free the animals inside seemed like a decent enough way to introduce that. I hadn’t planned to reveal her abilities for another couple of episodes, but it was a decent plot tool for explaining how she managed to get away with leaving her job, and you may as well know sooner rather than later. Yes, Mrs. Beedog has psychic powers. 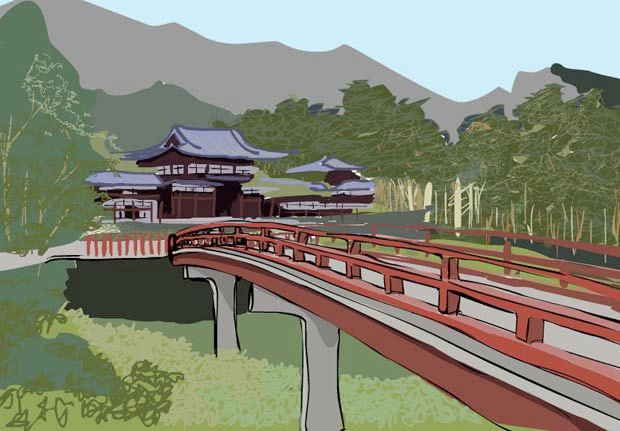 For the bridge scene where Beedog enters Kagoshima, I used much duller colors. When we first see him in Japan, it’s an old sepia-toned photo, and goes from that, to the above, to the brighter exterior of the toy shop and then the insane rainbow of its interior. The idea I was going for was that Beedog’s world was getting more and more colorful the closer he got to Kimiko. 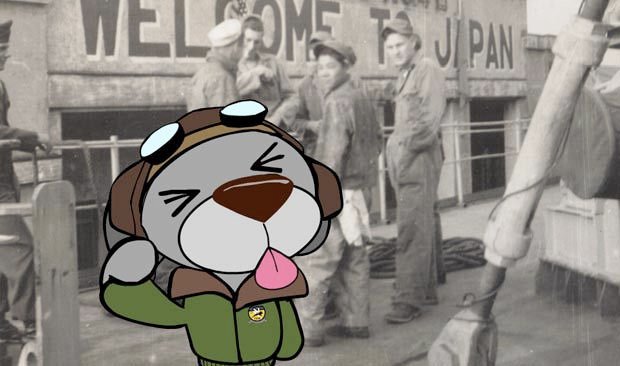 The first scene of the flashback is actually a photo of my grandfather. He’s the dude to the far right. He passed away recently, and I ended up with a bunch of his old war photos because my grandmother knows I have a big thing for WWII-era aircraft. He had a ton of photos of old planes and military hardware, and in the middle of it was this “Welcome to Japan” snapshot from his Air Force base when he was stationed there during the Korean War. It seemed like a good fit, driving home the point that this was taking place in the past. It also saved me the trouble of drawing a background and was kinda cool to have him in the show for a minute. The little badge on Beedog’s flight jacket was a thing I made on a whim one night out of boredom. “Inu” is Japanese for “dog,” making this a horrible pun that I should be ashamed of myself for. 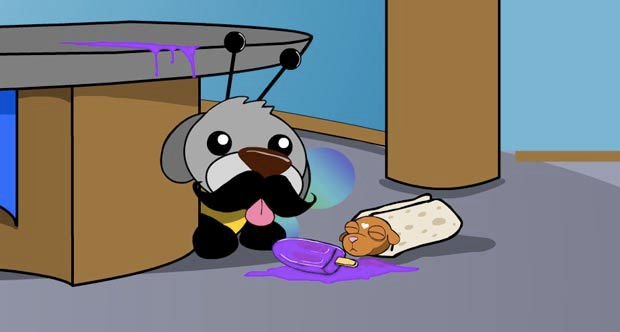 I was halfway through the episode before I remembered that I’d promised Senor Perrito del Burrito would be in it. The idea I had for him was that he’s this powerful oracle, or some supreme magical being. 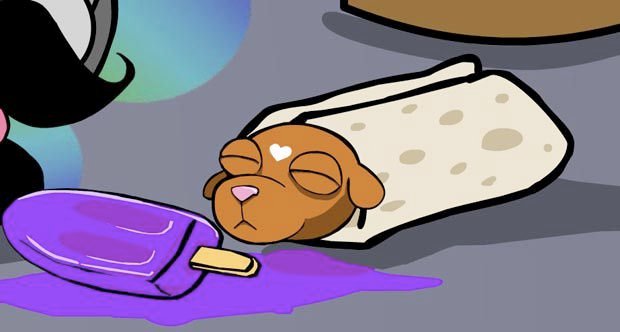 … Which is ridiculous, because he’s a newborn puppy wrapped in a tortilla. 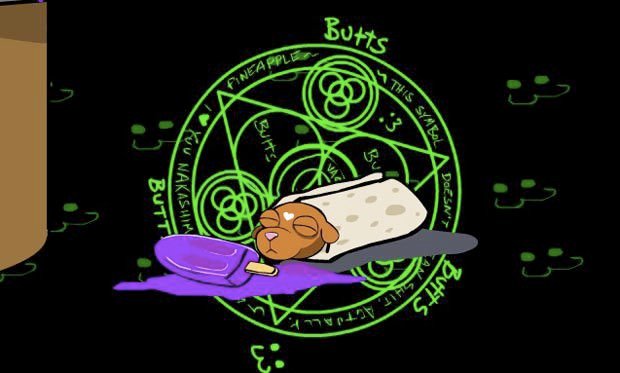 But ridiculous is what amuses me, so there you have it. A powerful magician with a severe addiction to grape popsicles. I tried to do a Final Fantasy-style magic circle for his revival spell. He’ll show up again later in the series with his earth-shattering magical power. Only the mighty Brad Nicholson will have the power to calm his spells when they get out of control. 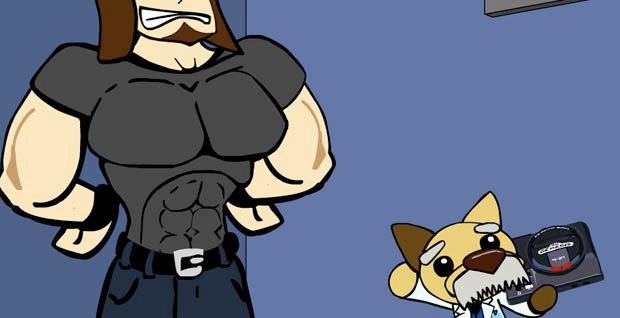 Finally, Dr. Patches makes a quick comeback to shout “Hooray Science!” while Perrito uses his alchemy. I wanted to remind everyone that he’s still around and will be a semi-regular character on the show.

I hope you enjoyed the second episode, and thanks again for watching. I’m about halfway into the script for Episode 3, and I think if you liked the first two at all you will like this one even better. Thanks to everyone who’s shown so much support for this silliness and for bearing with me as I learn to do something I’ve never done before. I have a tremendous amount of fun making these, and I hope I can continue to entertain you for a few minutes with my nonsense.

Episode 03 should be ready sometime in February.