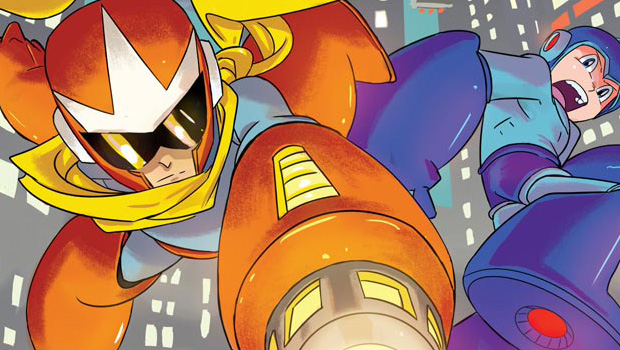 Issue #18 of Archie’s Mega Man won’t be on store shelves until tomorrow, but subscribers naturally get a jump on the action. In fact, I just finished reading the newest issue before typing this up. Eat it, suckers!

This month marks the end of the “Proto-Type” arc that follows the life of Blues before he became Proto Man. In the first part, we bore witness to his creation and his eventual choice to run away. With a damaged power core, Blues now tries to live his last days according to his own will. Meanwhile, Wily convinces Light that it’s time to move on and begin work on the Robot Masters.

I’m amazed by how heartbreaking this issue turned out to be. Blues has no peer among robots, yet he doesn’t fit among humans either. All he can do is wander the Earth, seeking meaning in his existence. An innate sense of justice compels him to aid humans in need, though he never asks for anything in return. On the brink of death, he returns home, hoping to find a loving father ready to embrace his wayward son, only to discover that his father has a new family. Distraught, he sets out again, in search of the perfect place to die.