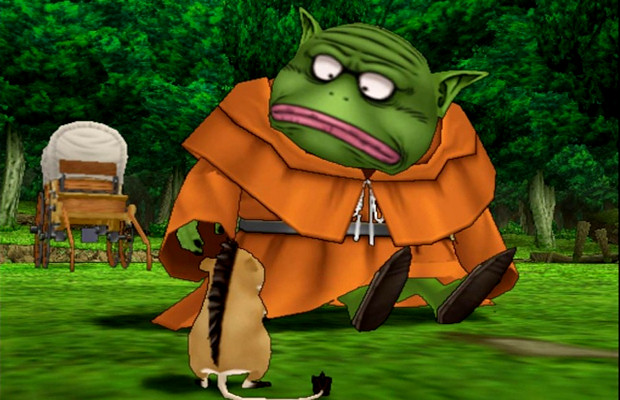 It’s so easy to miss the little things in life. Those things that brighten up our day but are taken for granted and never really noticed outside of our subconscious. Like Sunny days or calls from a loved one or the fact that your parents will finally be dead one day. RPGs, much like life, are full of these little extra touches that enrich any experience, yet they’re truly taken for granted and never given the appreciation they deserve.

Even worse, a great many RPGs shun them altogether, despite how easy they are to include and how big a difference they can make, despite their subtlety. Obviously, we cannot let that stand. Good roleplaying games have been throwing in quiet-yet-wonderful touches without applause for far too long, and it’s about time we took notice of the little things.

Read on as we isolate and appreciate the little things that every RPG should have.

Enemies that telegraph when their HP is low:

It’s amazing that more RPGs don’t do this. In nearly every roleplaying game, your own characters will start to wilt and pant when their HP reaches critical levels. The enemies get to know who is weakest and sometimes will capitalize on that, but why aren’t players awarded the same advantage? In the RPGs that do include enemy HP telegraphing, there can be few things more satisfying than finally seeing a hard-fought boss begin to sag and indicate that he’s about to give up the ghost. That’s when you know to go on an all-out attack, showing no mercy and finishing the job.

Seeing an enemy droop lets you know to save your precious magical spells for a more healthy foe. MP doesn’t grow on trees, and it’s annoying to have to waste a powerful attack on something that could be killed with a single sword strike, or use a potion just moments before the fight ends. HP telegraphing also makes for a terrific crescendo to a battle, that final push for victory when you see the enemy falter. Much more exciting and conclusive than an enemy simply disappearing after giving no indication that the fight’s nearly over.

This is definitely something more RPGs should include. The fact that a significant number of them don’t is borderline criminal.

Again, this is something I would expect from far more RPGs. It can be somewhat common to see equipped weapons visible on a character, but sometimes RPGs don’t even bother to do that, and it makes me sick. What I really want, however, are more games that render everything you put on your characters’ bodies. I want to see that Mythril Helmet, and if my character has put some glasses on, the game should show me what they look like.

Lost Odyssey met us halfway, by allowing accessories to appear. That meant that if Kaim was wearing glasses or earrings, they would appear. Final Fantasy: Crystal Chronicles will kit our characters in full armor that reflects what they’re wearing. It’s also very common for Western RPGs like Elder Scrolls or Fable to render full armor sets, but JRPGs simply don’t do them. I think they should. It’s silly to put a full suit of armor on a character and then see him fight in only a pair of ludicrously oversized pants.

RPGs are full of varied and strange enemies, usually provided without any kind of explanation simply because the game needed combat and the developers didn’t feel like contextualizing it. Random battles against bizarre monsters are a staple of the RPG genre, but it’s rare that you’ll ever find anything out about the creatures you face, outside of how many times you have to hit it before it dies. Games that provide a bestiary with interesting information on the monsters encountered have an extra flavor to them, and allow these random creatures a sense to have a sense of belonging in the world.

More importantly, I simply find that bestiaries are great fun simply to read. Flipping through the summaries of various creatures in Shadow Hearts or Castlevania is something I find enjoyable, and it’s a shame that so many games neglect to include listings and biographies of the various opponents defeated throughout the course of an adventure.

Why is a Hedgehog Pie called a Hedgehog Pie? Why is is giant worm boss hiding in the sand and why do I have to fight it without any explanation? I want to know these things, and if the game won’t tell me while I’m fighting them, at least include a paragraph of explanatory text in a menu somewhere so that I can find out afterward. Besides which, it’s fun to read up on an interesting game world and soak in the flare.

How many times have you been playing an RPG and started doing equipment shopping, only to find out that the store’s menu system sucks? You’re not given a clear comparison between your equipped items and the items you want to buy, so you’re not sure which items are better. Even more annoying, you’re not given the option the equip the new items after purchase, meaning you have to exit the store, open the main menu, navigate to the equipment screen and then equip from there.

While somewhat uncommon these days, there are still games that release with awkward, hard-to-read merchant screens that don’t allow for automatic equipping, and such things have to stop. A clear, clean, easily decipherable merchant screen that will let you change equipment while shopping makes each trip to the store much more pleasant and enjoyable, and ensures that customers will come back for more.

That bit when the party disbands in a town:

After battling through a dungeon, defeating a boss and traversing the world map, you come across a brand new city, the biggest city of the game so far. Excitement! When you enter the city, you trigger the obligatory scene where the characters react to the new sights and sounds. The party decided to disband and explore the town on their own, leaving you to your own devices. Time to look around.

As you walk about town, you’ll notice members of your party simply going off and doing their own thing. One character may be getting into an argument with a storekeeper. Another may have found some kids and decided to join in their game. You get to see these characters you’ve fought with in a more peaceful and natural environment, and you get to see what they do in their down time and, by extension, learn far more about them as a rounded and three-dimensional character.

Getting know and care about characters should be an important part of any RPG, and there’s no better way to foster investment into a character than to see them simply being themselves. These moments where you find your allies scattered about a city doing their own thing is a terrific opportunity for the player to get to know who they’re questing with. RPGs should always try and include these moments.

An RPG is a long and winding road. Lots of things happen, and sometimes it can be such a lengthy affair that a considerable break from playing is needed. When a player returns from that break, he doesn’t want to be stuck trying to remember what happened when he left off, or having no idea where next to go in a world’s vast map. A smart RPG will make sure to keep a log of your adventure, so that you can jump right back into the action after a brief refresher course.

It can be in the form of a journal or diary written by the player character, it can be a Metal Gear Solid-esque description of the story so far, or it can simply be a clearly labeled objective message telling you exactly what needs to be done next. In a game with a sprawling world and a huge story, it’s important to make sure a player doesn’t get lost.

It doesn’t happen in every RPG, but when it does happen, it’s always nice. Notable games would be Pokémon, or any number of Western RPGs such as Sacred 2 or Oblivion. It’s incredibly useful to have a level increase restore one’s health, especially when it comes to saving precious potions or curative spells. There’s nothing quite like being near death, yet incredibly close to leveling up, and fighting on just long enough to get that last batch of XP and get a free restoration. These are the kind of things that add very little to the game on the surface, yet bring just an extra dash of brilliance to keep things interesting.

Who needs those expensive Inns when you can work for your full health bar? Leveling up is satisfying in its own right, but throwing HP and MP at the player as well just makes it feel like so much more of a treat.

This is the biggie. Everybody knows about status spells: Poison, Sleep, Frog, etcetera. The kind of spells that don’t deal direct damage to an enemy, but have all sorts of unique, interesting and potentially powerful effects. In theory, these are the kind of spells a brilliant tactician or long-haul player should be permanently stocking in their deck of cards. In practice, however, these spells are nearly always worthless.

What happens in reality is that every boss in the game will be immune to the effects of status spells. They can’t be poisoned, put to sleep, confused or otherwise manipulated. What’s worse, a fair few regular enemies will also shirk off these spells as if they’re nothing. Naturally, however, if an enemy possesses the exact same spell, it’ll work on YOU every bloody time. It’s not fair, and it’s not right.

Of course, many games would be too easy if these spells worked all the time, but there has to be a compromise. Maybe a Sleep spell will work on a boss, but only for a turn or two. Maybe the Poison damage isn’t very much against strong enemies. Either way, it’s upsetting to have such great and disruptive magic while lacking the ability to use it effectively.

Games like Pokémon actually use status attacks quite expertly, with huge rewards in store for those willing to use them, and tactical RPGs tend to allow for status ailments in a much more lenient fashion. However, many other RPGs over the years have crammed their games with useless spells that could have been incredibly brilliant. Of course, when you actually manage to put an enemy to Sleep, you are one happy gamer.

And that’s what these little treats should be about. Making gamers happy. So take heed to this list, RPG developers of the world. We demand the little things, and we demand them now!