For those of you out there who might be scratching their heads, wondering, “TooManyGames? Whazzat?!“, let me be the one to tell you that you should remember that name well — for in the future, TMG will become a staple convention for us East Coast folk who don’t have the chance to go to all those fancy-schmancy expos out on the West Coast. To put it simply, TMG is an indie convention with an emphasis on all facets of gaming culture, without all the over-the-top glitz and glamour of the bigger guys. Intrigued? Read on.

TooManyGames 6 took place on May 4th at the Greater Reading Expo Center in Reading, PA — no more than a one-hour drive from my home, as it were. Upon hearing this, I immediately broke into a manic, totally embarrassing “happy dance” of sorts and thought to myself “My God! How did I not hear of this before?!” According to TMG’s completely down-to-Earth leader, Chuck Whitby (pictured above), it is not uncommon for him to hear people exclaim the same statement as I did. Truly, this was an extremely delightful surprise for all east coast gamers to behold.

So, how was TooManyGames 6? What went down there? What were my impressions? Who did I meet? Did Joanie really love Chachi? Hit the jump to find out the answers to these burning questions as well as much, much more! Don’t delay, act right now!

Okay, remember that “it’s no more than one hour away” thing I just said? I figured I’d take a quick moment and say the overall drive turned out to be closer to two hours because we got lost. Thanks a whole hell of a lot, MapQuest.

Anyway, after I finally arrived at the shindig, I quickly gathered my thoughts and found my initial expectations thrown out the window. It was one room, no bigger than the size of your average middle school gym. “Is this all there is?” I thought. Thankfully, looks can be deceiving. This one room was filled to the brim with people, tables, and most importantly, truckloads of games. At first glance, things seemed more like a flea market than a convention, but I was quickly taken by TooManyGames’ splendor once I had a chance to walk the room a few times and interact with my fellow gamers. Yes indeed, this was going to be a good day. 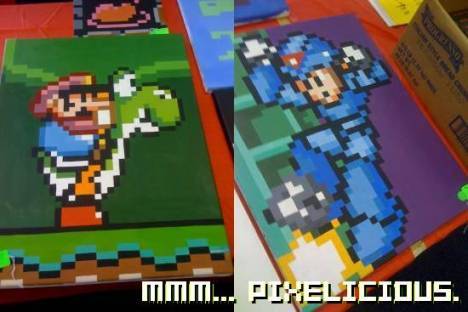 What’s a convention without a little creative genius? TMG had two nice folks with their work on full display. I was particularly fond of Aimee Dingman’s work (pictured above). I chatted with Aimee briefly about her paintings (yes, that stuff is painted on canvas) and she described the somewhat lengthy process behind her work. It involves taking a screenshot of choice, blowing it up to the size she’s looking to make, and painstakingly graphing it out on the canvas using a T-square. Talk about a labor of love.

If my wallet were a bit more full that day, I could have easily found myself walking away with about four of her works. Unfortunately for me, she didn’t accept moths and belly button lint as currency. Oh well. 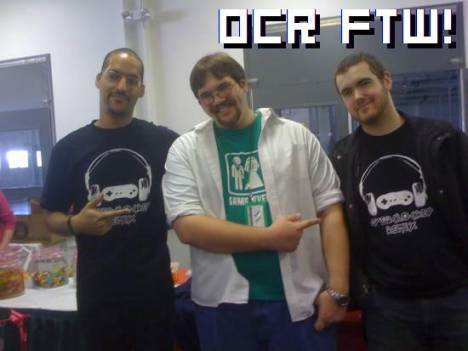 Welcome to the Jam! (Because your ears need candy, too.)

We’ve got games. We’ve got art. Now we need to bring the party, and TooManyGames has the best in the biz to do just that. Say “Hello” to Larry “Liontamer” Oji (left) and David “djpretzel” Lloyd (right) of the legendary OverClocked ReMix. If you haven’t heard of OCR, then you really can’t call yourself a gamer. They’re that important. For those of you who don’t know, OCR is a community-driven audio portal dedicated to the appreciation and remixing of retro and modern video game music across all platforms and genres. Destructoid highly recommends you check ’em out.

At TMG, these guys served as the perfect aural backdrop, and really did a great job of setting the mood for all within earshot of their table. Big kudos to them for playing “Terra in Black” at the con, as well. 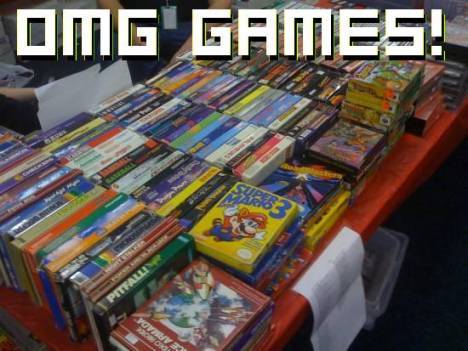 Did somebody say “GAMES?!” (Unlike this convention’s name, you can never have too many.)

Let me elaborate a bit more about what TMG had to offer in the way of vendors, events, and stuff to do. First off, if you’re looking to buy pretty much any game or console, you’ll be able to find multiple copies of each on sale, save for all the next-gen schtuff. TMG seemed heavily focused on retro gaming, even though they had plenty of Xbox 360s out for Guitar Hero (more on that in a bit.) There was easily a baker’s dozen of different vendors with tables stacked high and filled to the edge with games, accessories, oddities, and off-shoots. Speaking of which, one of the vendors there, GoodDealGames, had two unreleased, never-before-seen 3DO titles for sale. Indeed, TMG was a veritable cornucopia of digital bliss.

Besides the assortment of stuff to blow your life savings on, there was also quite a lot to do. There were a handful of arcade machines on freeplay; plenty of consoles and PCs were networked together (thanks to PhillyGamers) for impromptu Call of Duty 4 and Halo 3 goodness; VGXPO had an official Nintendo World Championships 1990 cartridge setup for a high-score contest; and did I mention a good dose of Guitar Hero? Speaking of that, video game world record trackers Twin Galaxies were in attendance to oversee the Guitar Hero National Championships and to give the general public the chance to record an official score to be put up on their website. Now THAT’S something you don’t get the chance to do everyday. 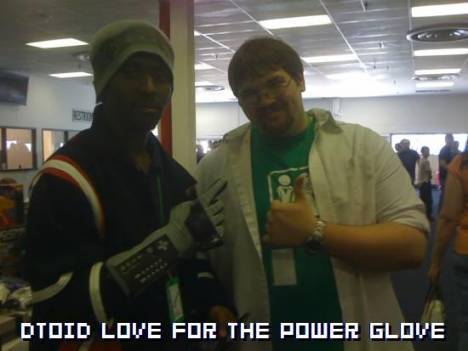 Parting is such sweet… something. (My not-so-Jerry Springer final thoughts.)

I guess this is the end, my dear friend. It really was a shame to walk through those doors and depart TMG. For hours, I scoured the many tables in search of good deals on rare titles I’ve been pining over for years, but alas, I only was able to walk away with two TurboGrafx-16 titles and three original PlayStation titles due to financial constraints. Nonetheless, I honestly could not have been happier with everything TMG had to offer. This really was a great success for the grassroots of gaming, indie conventions, and all who attended. The moment I got back into the car to head on home (and hopefully not get lost again) I started thinking about how I couldn’t wait for TMG to return next year.

In short, if you are a gamer on the East Coast with the means to make it out and you’re not looking for a “rock concert” sort of convention, you really owe it to yourself to check out TooManyGames. Period.

(Editor’s Note: I got word from Chuck today that a fall TooManyGames return to Reading might be in the works. So, if you missed out this time around, you might not have to wait until next year to check ’em out.)

Links and Special Thanks (Protip: Click the links to achieve enlightenment.)

Special Thanks goes out to…

Chuck Whitby – One of the two guys that made TMG possible. Thanks for everything, Chuck!

Paul Truitt – The second half of the TMG team. Sorry I didn’t get the chance to meet you, Paul!

David Lloyd – I think everyone should thank you for founding OCR. Let me know if you’re around in PA again.

Larry Oji – Thanks for hooking me up with some OCR goodies. Hope to see you again soon, man.

Ed Fleming – Ed’s the exec. director for VGXPO. Big thanks for your time! Hope to see you in November.

Triforce G. M. – Both your gaming ability and sense of fashion is impeccable. This man easily could be my brother from another mother. Thanks for the photo!

Sarah – My fiancée and official “camera person.” Thanks for hauling me down there!

The entire DESTRUCTOID Community – Without you guys and gals reading this, I wouldn’t have had the chance to write about TMG. Thanks for reading!