In my library, which is what I call the large shelf high up in my closet, sits my small but growing collection of Zelda keepsakes. Perusing the shelf you’ll find the excellent Legends of Localization Book 1: The Legend of Zelda, my copy of Hyrule Historia, a reprint of the Nintendo Power A Link to the Past comic, the now obsolete The Legend of Zelda and Philosophy: I Link Therefore I Am, a few Link action figures, some pre-order swag, and the complete set of Zelda manga. It sounds like a lot, but the shelf is actually quite big and I’m always on the lookout for more Zelda goodies.

The Legendary World of Zelda will not be added to my shelf.

Written by Game Informer associate editor Kyle Hilliard and published by Triumph Books, The Legendary World of Zelda is billed as the ultimate unofficial guide. Throughout its 143 pages of legally required reminders the book is neither sponsored nor endorsed nor licensed nor authorized by Nintendo of America, Hilliard takes readers through the history of Zelda from its beginnings up until whatever trailer for Breath of the Wild he watched before sending this off to his publisher. The book is billed as a “30th Anniversary Special Edition,” though as I was unable to find a standard edition of the book or any previous editions, I’ve concluded those are nonsense words added to this astoundingly lazy cover art to make it seem like a must-buy for any Zelda fan who comes across it at a Walmart or 7-11. 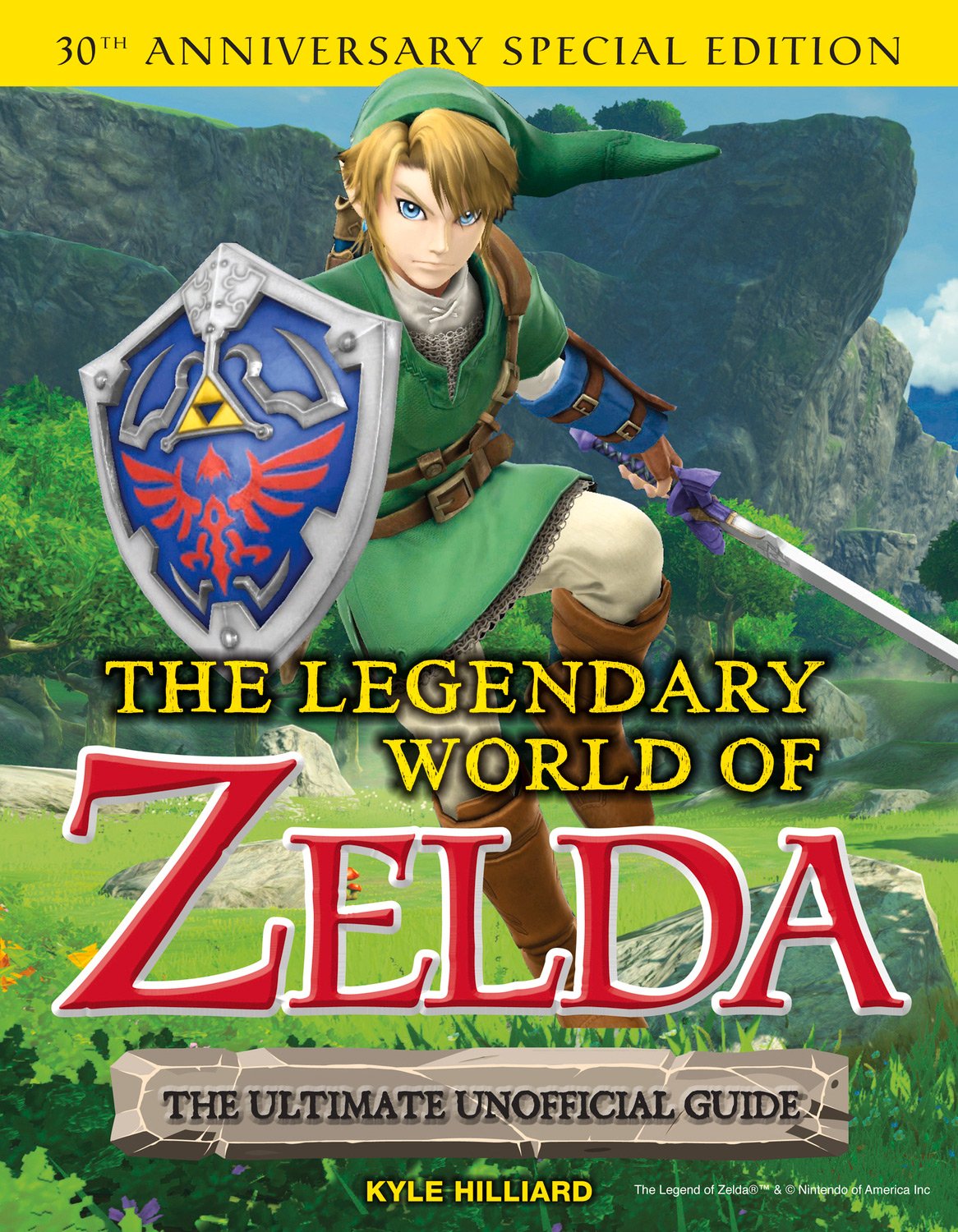 Most of the chapters in Hilliard’s book follow a rigid outline. He talks about each game in general, giving an often brief overview of its plot, the items, and its rereleases if applicable. Hilliard repeats himself throughout and often contradicts his own writing. He also writes in weird declarative statements that aren’t exactly opinions, but more of assumptions. For instance, he writes “Every game in the Zelda series has its fans that will say it is the best, but Link to the Past has the most.” In another passage, he says “The console [NES] came packed with Super Mario Bros., and much of the console’s success is thanks to the plumber brothers. But, The Legend of Zelda showed players how much fun an interactive video game could be.”

Going through the book, it became evident to me that Hilliard really doesn’t have much to say about The Legend of Zelda. He knows his history or at least knows how to look it up online before regurgitating the information, but I couldn’t find an original thought in these pages. The unyielding structure I mentioned before seems like a good way to organize its content, but it actually disguises the fact there really isn’t much here. It would have been nice to see him lean in and take a deep dive into even one subject, but instead, he left us with a book that barely scratches the surface.

There are a lot of strange omissions as well. When talking about the Oracle games, there is no mention of the Advance Shop even though it’s explicitly said the game released right before the launch of the Game Boy Advance. There’s not a whisper of the Chris Houlihan room in the chapter about A Link to the Past. When talking about The Wind Waker, the words “The Great Sea” do not appear. Hilliard also brings up the initial fan reaction to Wind Waker’s graphics but fails to mention the Space World 2000 video of the supposed The Legend of Zelda 128. There is a chapter dedicated to Four Swords Adventures, but the original Four Swords is rarely mentioned.

There is also neither a mention of the series’ inclusion in NES Remix nor the fan-created Zelda Classic. The 1988 The Legend of Zelda board game and Japan-only The Legend of Zelda The Hyrule Fantasy board game are also absent. I get those two are obscure, but they feel like ridiculous exclusions from a Zelda merchandise section that only features amiibo, recent action figures, and The Legend of Zelda Monopoly; you know, recent crap that you don’t have to bother putting a little effort into researching.

It’s an incredibly sparse read that only took about two hours cover to cover. Even just glancing through it, a few errors stood out. Typos and poor picture placement I could ignore, but one passage has stuck with me. Hilliard writes “In Japan, Link Between World’s title translates roughly to A Link to the Past 2.” This is false. The Japanese title for A Link Between Worlds is Triforce of the Gods 2 as it is a follow-up to A Link to the Past, which was called Triforce of the Gods in Japan. This seems like a good time to point out Hilliard is sold as having an “encyclopedic knowledge and passion for all things Zelda.”

Though not its biggest problem, the timing of this book is also quite unfortunate. Breath of the Wild will be two months old when this hits store shelves. Because this was written before that game’s release, all the information in it is based off pre-release interviews, trailers, and press conferences. The book will be outdated by the time you have a chance to buy it.

Triumph Books says The Legendary World of Zelda “represents a wonderful keepsake for longtime players and essential read for the next generation.” Half of that statement is true. If you know of or have a young child who is just getting into Zelda, this wouldn’t be the worst thing you could give that introduces them to the series. But for me, one of those longtime players mentioned above, the book’s a joke.

Filed under... #Books#Impressions#The Legend of Zelda