When you have a title that revolves around space, you’re likely in for a wonderful ride. Mario’s journey through the stars in the Super Mario Galaxy games was a blast, and Guardians of the Galaxy made us laugh with its main gang who were seen outcasts. One of the appeals of this setting is that we get to witness a creative take on the places that lie beyond our homeworld.

With the Power Rangers series’ source material, Super Sentai, hitting us with a show themed around heroes who wield the power of the constellations, Uchu Sentai Kyuranger (Space Sentai Kyuranger) could grant us the wonderful feeling of exploring a vast universe, except with a team of colorful costumed heroes taking the lead. 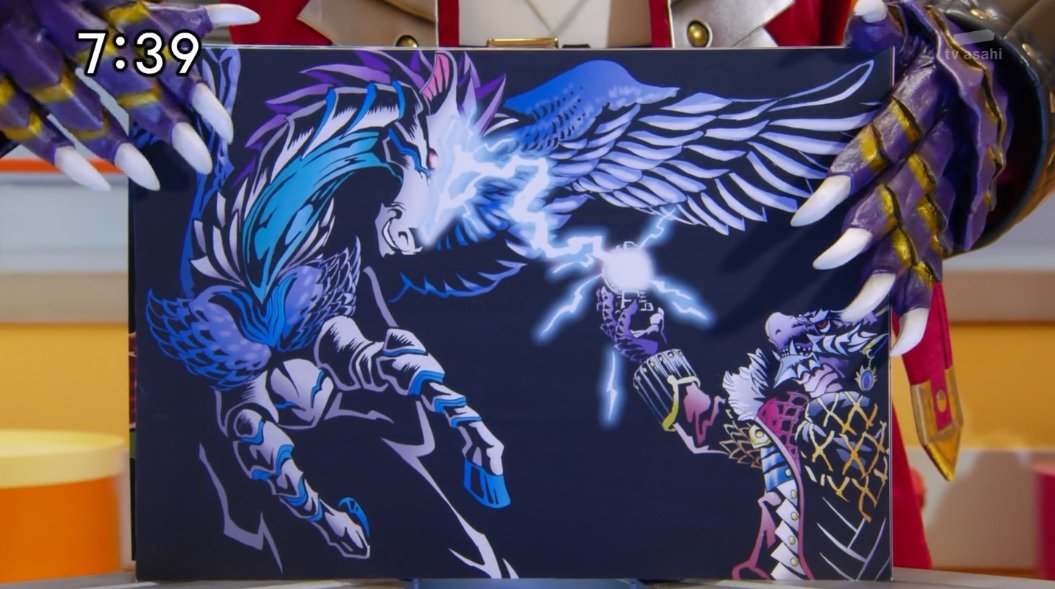 If there’s one thing that sets Super Sentai apart from Power Rangers, it’s that the original Japanese series tends to have a different story and it can get away with more stuff than its Americanized adaptation, such as characters having injuries or scenarios where you feel that innocent people’s lives are on the line.

Even though both titles are small-budget action programs that are meant to sell toys to children, Sentai tends to have more installments where many older viewers might become invested with its premise– kind of like most of the DC animated TV shows. This can apply to the franchise’s most light-hearted stuff as well. In fact, this element is present in many tokusatsu (live-action special effects) titles outside of Toei’s hero series about a team of heroes who don colorful spandex suits.

While Kyuranger’s first nine episodes did a good job with handling the franchise’s first nine-man starting team, its potential decision to use Earth as the show’s main setting could hinder this star from shining brightly.

Luckily, the show started off with an opening that’s strong enough to get people invested in the show, as the gang is up against an evil space shogunate called Jark Matter. Since Kyuranger’s main premise involves nine heroes to uniting against a group that conquered a good chunk of the universe, the program gives off a nice Star Wars vibe. Considering that George Lucas was inspired by Akira Kurosawa’s The Hidden Fortress, this is likely another example where things come to a full circle.

With the main team being part of an anti-Jark Matter group called the Rebellion, Kyuranger’s early episodes focused on the team liberating various planets from the shogunate’s grasp. All in all, it felt like a nice change of pace from the usual Monster-of-the-Week elements in the Sentai franchise since the team is seeking out these creatures, instead of the villains sending a random bad guy to torment innocent bystanders. This made the fights more meaningful, as each battle results in a planet being liberated. While this segment worked out well, the program’s Red Ranger can be a bit annoying.

Throughout the series, Lucky/Leo Red brags about his luck, which makes him seem like an annoying person who mentions things that people have heard a million times. Despite his obsession with his so-called talent being a pain in the butt, he’s more tolerable when he does his best to win over the other characters that get chosen to be part of the Kyuranger team. Since the rest of the cast is more entertaining than our red hero, a few good things came out of his actions. 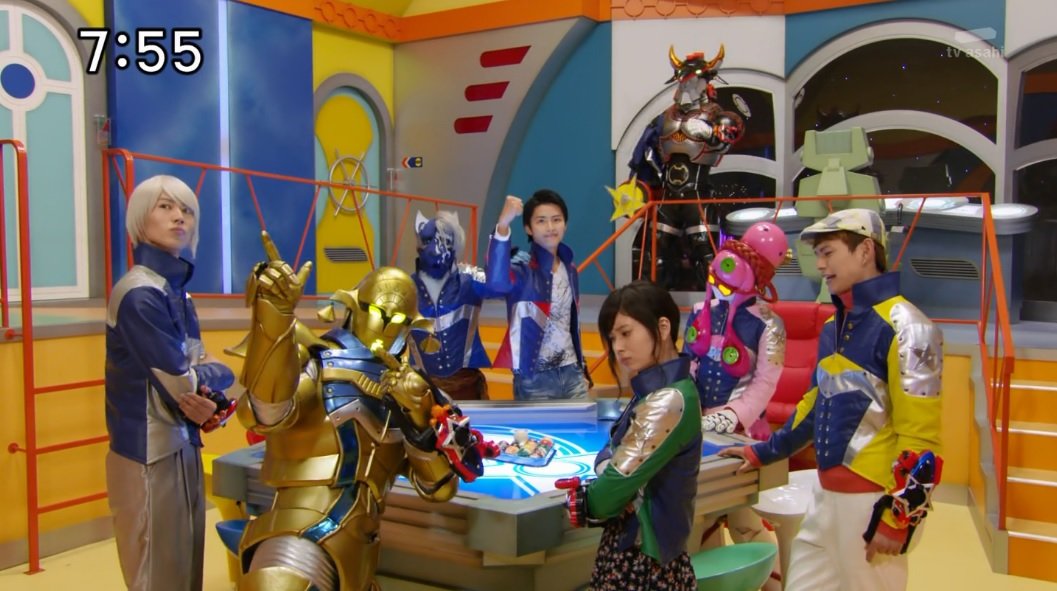 One of the things that made the rest of the characters fun is that they have their own sub-motifs. We have a space ninja, chef, robot bull wrestler, wolfman, scorpion spy, android, and a pair of thieves making up the rest of the core team. At the top of the command chain, there’s an alien dragon who’s obsessed with adding stars and ball-related puns to his vocabulary. With a group this much variety, the show ensures that each character stands out in their own way.

Each Ranger has their own reason for becoming part of the Rebellion, and their tendency to act silly goes nicely with the show’s silly moments as they all do their best to ham things up. One of my favorite Rangers is Balance/Libra Gold and Naga/Ophiuchus Silver since you have a whimsical mechanical being interacting with a guy who’s learning how to express his emotions. Thanks to cast’s entertaining performance, they manage to cancel out Lucky’s annoying traits. Also, it’s silly that the main cast uses the term “OKyu” as a way to say “okay” or “roger.”

Despite Kyuranger being on a roll with most of its cast and its story of liberating planets from their evil rulers, the show threw itself into a strange corner after the team was close to being fully formed. This concern came in the form of the program being set on Earth, which means that we might not get to see the gang explore the universe. Even though the program gave us a decent reason for the main cast to remain in our world, it felt strange for the show to go from the Rangers traveling to various planets –kind of like Power Rangers in Space— for a few episodes to focusing on one location. 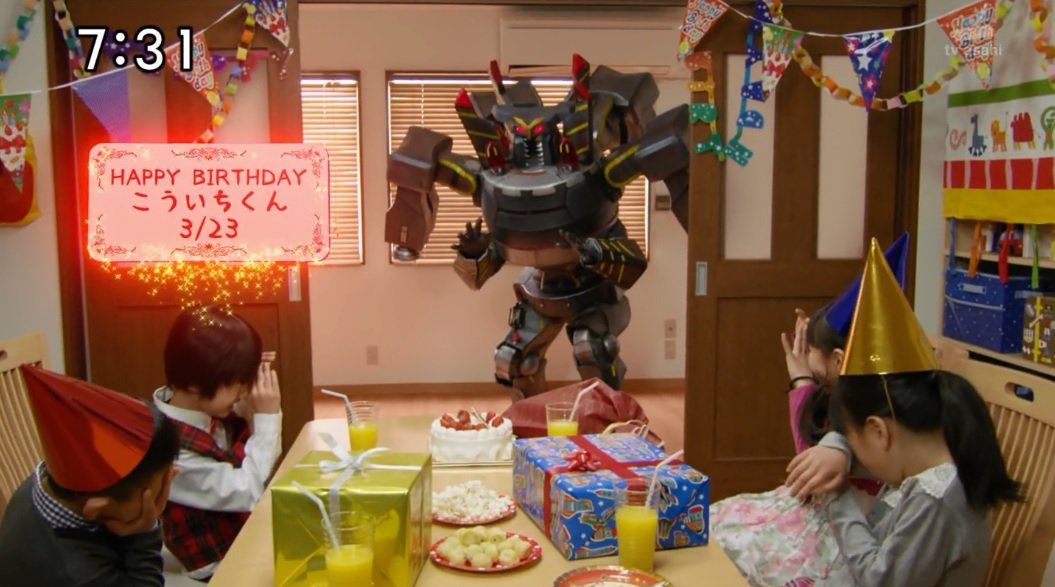 Of course, with the show’s return to the franchise’s usual setting, this meant that its signature elements would surface again, such as the Monster-of-the-Weeks’ silly schemes– think of them as the cheesy schemes with the Power Rangers franchise’s bad guys, except with the occasional segments where people’s lives are on the line. Nonetheless, these moments still work when they’re done well and Kyuranger hit us with a few that were funny. Perhaps the silliest one is a villain who went around stealing people’s birthdays. To top it off, the series featured some intense arcs early on, which made up for the program likely taking place on Earth from here on out. As long as the show’s staff takes advantage of Jark Matter being an enormous group, the Kyuranger’s future challenges could help the series remain fun.

Even though the series brought together all nine main Rangers before hitting episode 9 or 17, we rarely get to see them all fight all at once. Instead, most episodes have five members randomly chosen through the luck of a draw since the series’ excuse was that the group need to conserve their resources. At first, it felt like Kyuranger was wasting its potential of having one of the largest starting teams in the franchise fighting evil every week, but the limitation helps change things up with the way how each member interacts, along with how they finish off their opponents. Seeing that these shows have a good number of budget limitations, this route could keep the action’s quality consistent.

Thankfully, the gang’s rule for liberating Earth doesn’t stop the series from featuring more than five heroes. Just like the previous Sentai and Power Rangers shows with extra Rangers, we still get moments where the whole team gets to kick some serious butt. On top of that, the formation gives us segments where the inactive heroes could go off to other areas and planets to do their own missions; thus giving the whole gang the chance to shine. 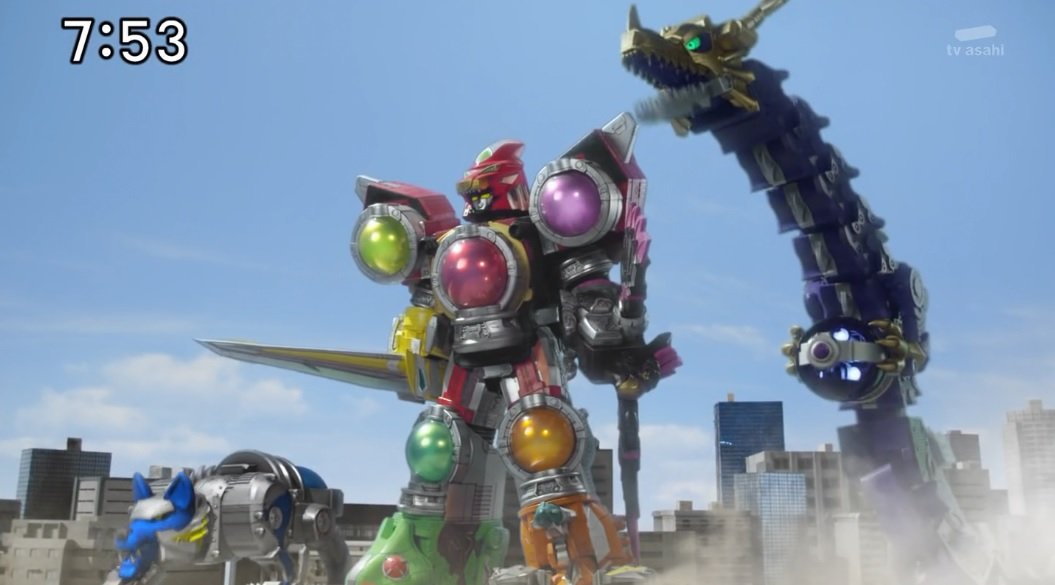 As for the show’s suits, Kyuranger brought us a new spin on how the costumes are made. Each Ranger has a unique feature on their outfits outside of their helmets, such as Lupus Blue’s fur or Taurus Black having a bulkier suit with an armor-like look. All in all, the staff’s decision to change up the suits was thanks to Bandai of America giving their input on the series’ concept art and designs, which hints at this program likely being adapted into the Power Rangers to replace Ninja Steel in 2019.

Other than the unique features in the costumes, the helmets give off a nice Chouriki Sentai Ohranger/Power Rangers Zeo feel since they have noses and mouths. The visors do a good job in representing the Rangers’ corresponding constellations and it’s was neat of them to add glitter to make it seem like they have stars on their face. Overall, I could see myself getting figures of these heroes down the road. Since Bandai of America’s input turned out nicely, something tells me that they weren’t able to give much insight on the suits for the 2017 Power Rangers movie, as those designs didn’t translate well into toys.

While we’re on the topic of large robots, the series’ signature machine the Kyuren-Oh complements the show’s decision to stick with five members in most episodes since it lets the colossal mech destroy its opponent in many various ways. Some instances include the iconic sword finisher and there are cases where it uses a yo-yo, a snake arm, and a bow for the finisher. Seeing that each non-red bots can become various body parts, Kyuren-Oh is among the franchise’s versatile mecha giants. 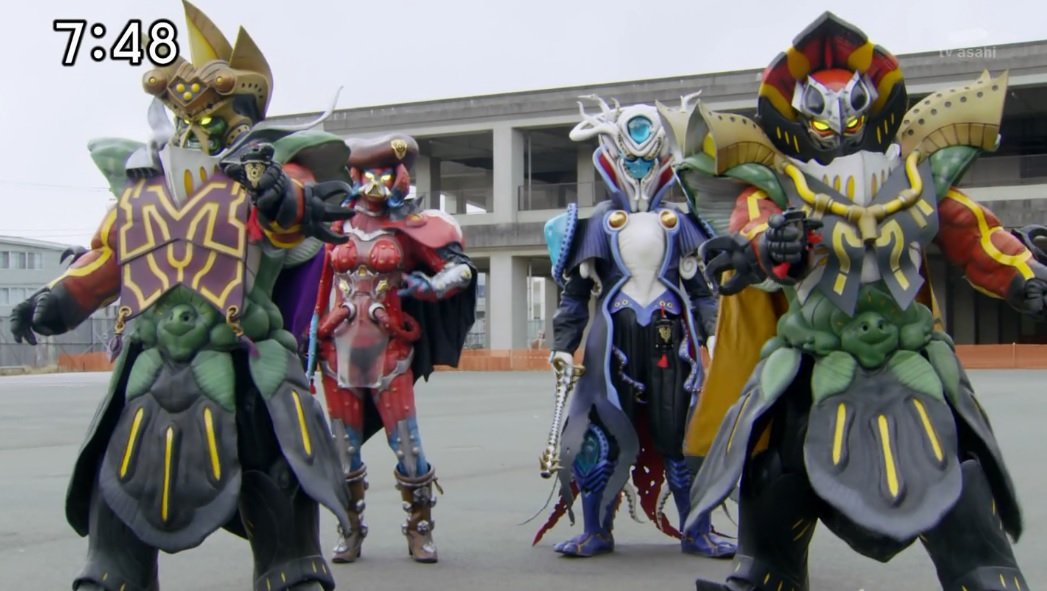 Other than the diverse suits and sub-motifs, the gang does their best to stand out in combat. While everyone’s weapon is the same red and blue armament, they have it take the form of the equipment that suits their style. This also applies to their unarmed battles as you have characters like Lupus Blue showing off beast-like movements, or Aquila Pink using aerial attacks. Like with most shows in the franchise, there aren’t that many segments where the characters fight the bad guys without their costumes. Instead, the suit actors do all of the fight sequences. This is one of the things that Power Rangers has the advantage over Super Sentai, since the stars receive experience in doing action scenes; thus expanding their acting resume.

As Kyuranger continues to remain Earthbound, it’ll be unfortunate if the team won’t get to free other planets later on. However, the show’s large diverse cast continue to be entertaining– even if the Red Ranger can get one’s nerves a bit. From the looks of it, the gang’s development could keep things fun if they decide to stay on Earth for the next 40 episodes to come.

While I’m happy with a good chunk of Kyuranger’s content, I’m still worried that the team’s battle against Jark Matter won’t live up to its potential. Then again, Kaizoku Sentai Gokaiger, the show that was poorly adapted into Power Rangers Super Megaforce, had its cast fight a huge space empire on Earth, so it could go both ways. One thing for sure, it’s going to be funny seeing people imitate the show’s ending theme dance since there’s a part where everyone does a pelvic thrust.

[You can watch Uchu Sentai Kyuranger on Japan’s TV Asahi channel every Sunday at 7:30 a.m., and catch more of the latest anime and J-game coverage at Japanator!]