Mandatory installations of certain PlayStation 3 games (e.g., Devil May Cry 4, Hot Shots Golf: Out of Bounds) have become a point of contention among gamers. We’ve certainly seen that happen here on Destructoid in a few c-blogs where things got heated at times. The typical explanation that gamers have been given is the PS3’s 2x Blu-ray drive, which has a much slower maximum read speed than the 12x DVD drive in the 360 (72 Mbps vs. 126.6 Mbps).

Blame it on Blu-ray, right? Well, not entirely — according to some research done by Patrick Klepek over at the MTV Multiplayer blog. Apparently, Capcom wasn’t expecting the required 5 GB installation in Devil May Cry 4 to become as big of an issue as it did. (They’re going to consider that reaction in the future.) When he pressed Capcom, Sony, and Ubisoft for more details, he didn’t get much. But he posted what little he obtained, and you can check it out (along with my analysis/commentary/whining) after the jump.

Everything comes back to the developer putting resources into Blu-ray’s “unique characteristics”. But Blu-ray and DVD are fundamentally different technologies in the way that their respective discs are read by their drives, as Klepek tells us:

The issue arises from differences in the reading techniques of DVD and Blu-ray. By nature, the outer and inner parts of a disc move at different speeds while a disc is spinning, regardless of format (CD, DVD, Blu-ray, HD-DVD, etc.). While DVD drives can read data at those differing speeds, Blu-ray reads at one speed. Combine that with the extremely large size of Blu-ray discs, and simply dumping existing DVD data onto a Blu-ray disc will inevitably result in longer load times.

There are a few different solutions that developers are using. For example, Bethesda Softworks is simply putting the same data in multiple locations on the Blu-ray Disc for Fallout 3. That gives the drive more areas in which to find the same data, of course. Other devs are improving streaming systems. I still think installations should be optional, like in Epic’s Unreal Tournament III, so storage-strapped gamers can still play without having to delete other stuff off of their hard drives. 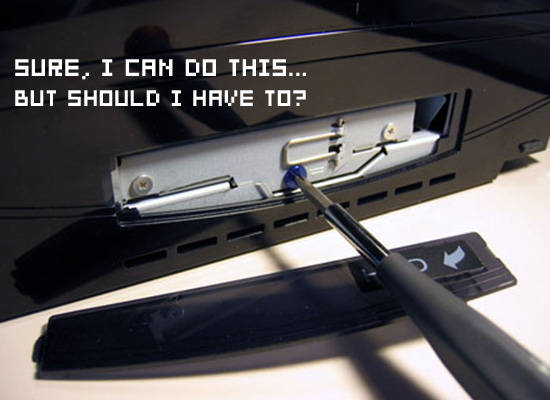 But as far as I’m concerned, just because the 360 has a much larger install base than the PS3, developers shouldn’t be “picking” one platform over the other. Some of these installations spring out of the fact that developers of multiplatform games optimize those games for the DVD medium, and then simply plop the data onto a Blu-ray Disc. And as Klepek mentioned above, that’s a problem.

However, don’t give up because you have to actually put some work into optimizing code for the PS3 and Blu-ray. I get the feeling that that’s what developers are doing because it’s cost-effective (i.e., the PS3 version isn’t worth the effort because they’ll make enough money by selling copies of the 360 version). That’s the kind of stuff that I find very irksome.

And while I’m bitching, it’s also unfair for PS3 owners to have to suffer through shoddy, second-rate ports of games that look and play better on the 360. I mean, here are five AAA titles that are essentially identical on both platforms (in terms of the gameplay experience): Guitar Hero III, Call of Duty 4, Rock Band, Burnout Paradise, and Devil May Cry 4. If Neversoft, Infinity Ward, Harmonix, Criterion, and Capcom, respectively, could pull it off for those games — then why can’t EA Tiburon, for example, ensure that Madden runs as well on the PS3 as it does on the 360? That’s what engenders a vicious cycle:

1) Many multiplatform games look and play better on the 360 than on the PS3.
2) People would rather buy a 360 than a PS3 in order to try and ensure that they’ll get the best gaming experience for multiplatform games.
3) The PS3 continues to have a significantly lower install base than the 360.
4) Developers aren’t willing to put the time/money/effort into making games look and play as well on the PS3 as they do on the 360.
5) Repeat steps 1-4 ad infinitum, or until the developers actually man up and give it their all. 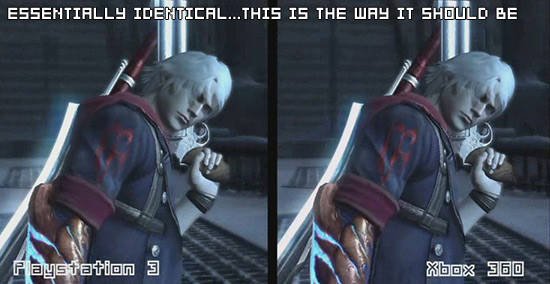 Of course, I understand that I’m being very idealistic here. At the end of the day, videogames are still business, so developers and publishers are going to do what makes the most fiscal sense. I mean, during the last console generation, no one gave a damn that Xbox games looked much better than PS2 games; that was expected because the Xbox was simply a more graphically advanced machine. The differences between Sony’s and Microsoft’s gaming systems are much more subtle this time around, so why is it so damn hard for the gaming experience to be similar on both platforms?

As a final note, I beg of you: please don’t let this descend into fanboyism. That’s exactly what happened in the comment thread of Klepek’s original post. While I’m not naïve enough to think that Dtoiders are above such sophomoric shenanigans, I’d like to think that we could make it happen with some effort. In fact, here’s my favorite comment from the Multiplayer blog thread:

All this whining.
Its funny that each of you (myself included) spend about 20-30 minutes a day reading articles, and occasionally writing responses to them.

I’m glad my DMC4 loads like butter, and I’m glad I spent the 20-30 minutes it took to install pleasuring my girlfriend so she wouldn’t bother me for the next few hours while I played.

You’d think that his words would’ve shut people up, but they just kept going. I have faith that we’ll be able to keep things civil…right, guys?