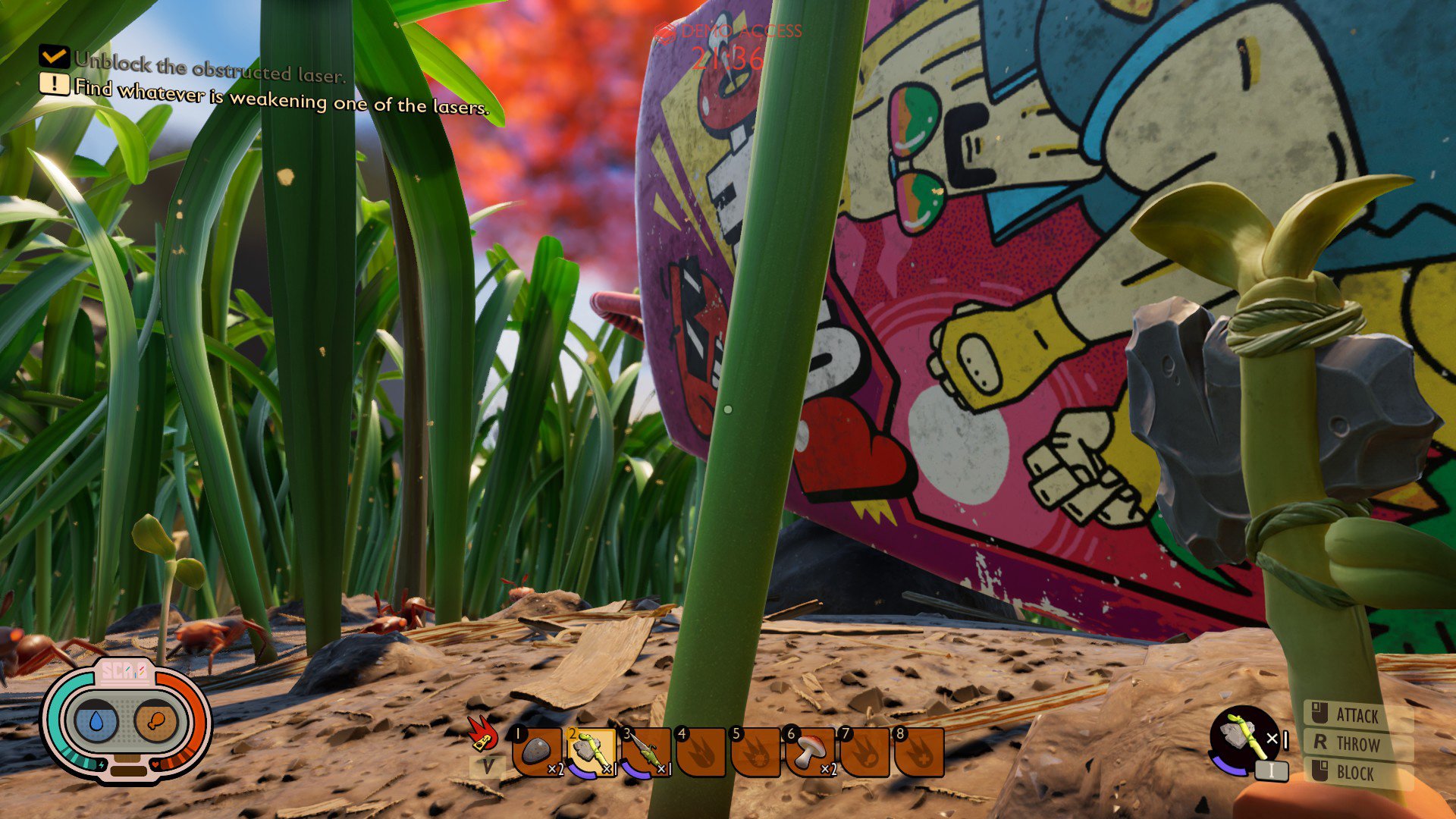 Obsidian’s take on the survival genre is refreshing

Before today, I thought that Grounded, a shrunken-kids survival game from the RPG powerhouse Obsidian, had decent potential. It’s not exactly the studio’s bread and butter, but the pitch – a solo/co-op adventure in which you’ll chop down blades of grass and fend off monstrous spiders – drew me in.

After trying the 30-minute Steam demo and digging it enough to go through it twice (and even consider a third run-through), I’m sold on this surprisingly fresh angle. If you’re partial to crafting-centric games and you enjoy exploring creative spaces that make you feel like anything could be lurking on the horizon, you should check it out too. One of the standout “landmarks” I discovered was an action-figure head.

Before I go any further: yes, there are spiders, and they’re absolute beasts.

On my first playthrough, I crept past a snoring giant. No big deal! On my second playthrough – my attempt to disregard the story goals and cover as much ground as possible – I ran right past so many eight-legged freaks. A word of warning: they can slip into a soda can, so don’t even try to hide.

Fighting a spider with a starter spear felt like facing Havel in Dark Souls as a level-one character who could only their fists. For now, in this time-limited single-player-only demo, it’s best to sprint.

I do have to commend Obsidian for its above and beyond Arachnophobia Safe Mode. It’s not a simple on/off toggle like I would’ve thought. Instead, it’s an accessibility slider – the more you slide the bar, the less menacing spiders will be. At the far end of the spectrum, they’re little more than multi-eyed blobs.

The Early Access version of Grounded will launch with “roughly 20 percent of the full storyline,” and this week’s demo showcases a snippet. There’s just enough time to get a feel for the story, hit up a tent to research items, figure out the crafting menu, and build some melee weapons and tools – if you rush.

After waking up in a cave, your chosen shrunken-down teen will be asked to investigate a super-conspicuous machine, cut down a towering blade of grass that’s blocking a laser beam, and explore a mite-infested tunnel. That said, there were tantalizing distractions almost everywhere I looked.

I love the way the insects stroll around and interact with your character and each other. Some Ants are curious. Others are peaceful – to a point. And gnats? Above all, the fuzzy little guys just want a hug.

If the full game can make the most of its captivating world – if Grounded can maintain my drive to explore every inch of the map – then it’ll be in a great place. The narrative might be the icing on top.

Survival titles tend to be at their best during their first few hours when you’re still encountering new stuff all the time and the world hasn’t lost its imagination-stirring sheen yet. I’m cautiously optimistic.

Mechanically, Grounded is about what you’d expect – you’ll drink water and snack on mushrooms to stay topped up – but again, in this miniaturized context, even the basics feel more interesting.

The crafting system is pretty thoughtful and quick. If, say, you’re trying to make a Pebblet Axe and you don’t have a Woven Fiber in your inventory, you can just craft that sub-part right there without leaving the page (assuming you have the ingredients). That helps cut down on back-and-forth busywork. There are a lot of pages for tools, structures, gear, and other items, but they’re reasonably well-presented.

My favorite bit so far? Hauling chunks of grass over my shoulder like a lumberjack.

One step at a time, though. As good of a first impression as this trial makes, Grounded still has a lot to prove. My best-case scenario would be to see Obsidian scale up its smaller development team as needed and really let the game blossom. I hope this concept gets the time and attention it deserves.

The single-player demo is playable on Steam until June 22, and there’s also an Xbox Insider preview.

The full version of Grounded isn’t far off, either – it’s out July 28 for Steam Early Access and Xbox Game Preview. Thanks to the demo, I went from “I’ll check it out eventually” to “I gotta show up day one.” If you’re planning to hold off until the final release, that’s currently aiming for “sometime in 2021.”

Some parting advice: Do not attack the ladybugs. (For your safety, not theirs.)