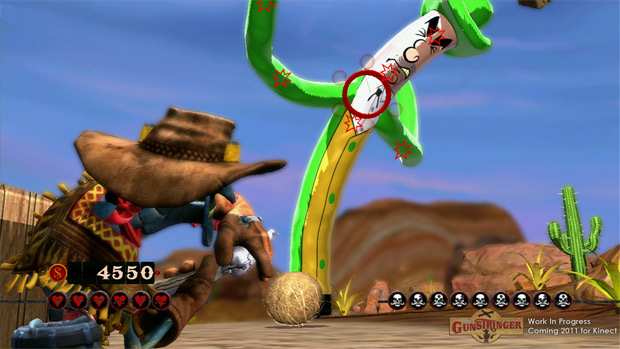 More than a few eyebrows were raised when it became known that Twisted Pixel’s The Gunstringer would be a retail game instead of a downloadable one. To make you feel better, the retail box will come with codes for Halfbrick’s Fruit Ninja Kinect and The Wavy Tube Man Chronicles DLC.

This DLC concerns the fight against Wavy Tube Man Jr., son of the first boss in the game, who steals a time machine to take revenge and has you battling classic western cowboys and futuristic warriors. Makes sense to me. If you pre-order The Gunstringer, you will also get two free Avatar Props.

What’s even better is that the game will only be $39.99 when it is released in the U.S. on September 13, and £29.99 in the UK on September 16. That’s cheaper than the average Kinect title at launch, with free DLC, Avatar stuff, and a free game to keep your kids occupied while you do some serious nerding around the house.