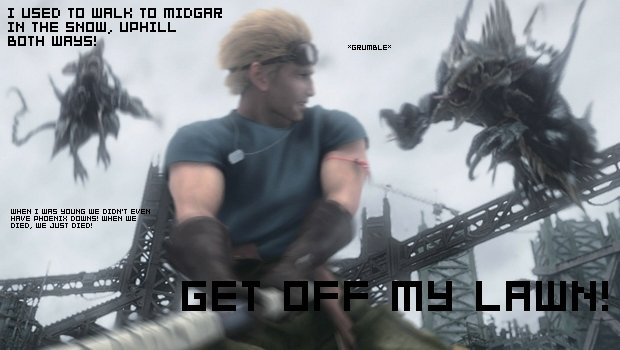 Next week marks the release of the next iteration in the revered Final Fantasy series, the highly anticipated Final Fantasy XIII. Woo hoo! To celebrate, I will be posting a trilogy of Final Fantasy-themed features all this week, each one focusing on a different aspect of what makes the series so gosh darn memorable.

One thing that is refreshingly unique about the Final Fantasy series is that none of the main, numbered games are direct sequels to each other. Each game exists in a very similar universe, but none continues the stories previously established in the games that precede it. (I am not counting X-2, After Years, or Tactics as main games in the series.)

Despite each game being its own complete story, though, there are certain, very specific items, enemies, and characters that populate each game, tying the overall Final Fantasy worlds together. Things such as phoenix downs, Chocobos, and Moogles can be found in almost every one of the so-far released twelve games in the main series.

But, for me, my favorite recurring character in all the Final Fantasy games has to be Cid.

But thinking back on my favorite Cids in the Final Fantasy universe, I came to the realization that there is a pattern to which ones I like the best. It seems the grumpier Cid is in a particular game, the more awesome his character. Is this just a coincidence or am I on to something?

Hit the jump for a breakdown of every single Cid over the years … and how his grumpiness relates to his level of significance and overall popularity. It’s all very scientific.

I had to really research this one. At first, I thought Cid was not in the original Final Fantasy at all, but come to find out he is … sort of. While not present in the original NES game, Cid was shoehorned into the story in previous released versions of the first Final Fantasy for the PlayStation and PSP. I like to think Square-Enix knew I was going to write this article one day and wanted to keep everything clean and consistent.

Because of his early absence, I am not very familiar with his role in the game. If history is any indication, I can only assume that Cid in the original Final Fantasy is old, has something to do with an airship, and is wonderfully grumpy. He is also most likely awesome.

And just like the best Cids in the series, Cid in Final Fantasy II is grumpy as hell. He loves his airship and doesn’t care about anyone who thinks otherwise.

Oh, Cid Haze. You had such a great look going for you: funky hat, big fluffy beard. You could have been the grumpiest old Cid to ever grace the Final Fantasy series!

Sadly, though, Cid Haze is too much a pushover in Final Fantasy III to truly represent the best Cid has to offer. He is ridiculously generous in the game, offering his airship to the game’s main characters to help them on their way, but there are too many instances when Cid asks for help that he really shouldn’t need. And Cid isn’t supposed to be sweet and accommodating. Cid is supposed to be that old man that steals your football when it falls into his yard. He gets things done on his own terms!

Cid Pollendina in Final Fantasy IV is the series’ first true playable Cid (not counting the quick instance Cid joins your party in FFIII). He is also easily one of the best Cids ever!

A good friend to main characters Cecil and Rosa, engineer Cid joins the party after being arrested for treason for betraying the fake, evil king of Baron. After being rescued (never saying thank you like a classic Cid should), Cid reveals his greatest invention to his friends, the airship Enterprise.

Throughout the entirety of Final Fantasy IV, Cid is, at the same time, both lovable and absolutely stubborn. He works too hard, complains about things not getting done, and constantly gives everyone around him attitude. But despite all this, he is supremely likeable and one of the best characters in the game. He also performs a ridiculously brave act near the end of the game that saves all his friends … and complains and yells the entire time he does it.

To no one’s surprise, Cid Previa has a lot to do with the airship in Final Fantasy V. An inventor like almost all of the Cids that have come before him, Cid Previa is the unwilling creator of a machine used by the power-hungry kingdom of Karnak to drain the world’s crystals of their energy.

Because of this, Cid sulks through most of Final Fantasy V. He has some great moments of grumpiness, but most of the game’s best moments belong to his much younger grandson Mid.

This is the one glaring exception to my magical equation that a grumpier Cid = a better Cid.

Not that Cid Dell Norte Marquez (best name ever!) is not an old, grumpy bastard at times — he is! — but his moments of stubbornness are completely overshadowed by how remarkably kind-hearted he is.

As chief engineer for the evil Empire, Cid Dell Norte Marquez is responsible for inventing Magitek, the process of how magic is (painfully) extracted from the innocent Espers of the world. While the process was meant for research, it was used for terrible purposes by the Empire, putting Cid in a very uncomfortable position.

After the world is destroyed by Kefka, Cid is kept alive by Celes — a genetically-engineered female knight of the Empire and adopted daughter of Cid — after he becomes sick trying to care for her. The sequence on the Solitary Island with Cid and Celes is one of the most powerful in videogame history. During this moment in Final Fantasy VI, all of Cid’s grumpiness melts away, revealing a generous man that performs acts of such kindness it will bring tears to your eyes.

Although he is not one of the grumpier Cids, he may arguably be the best.

Hands down, Cid Highwind from Final Fantasy VII is the grumpiest Cid to ever star in a Final Fantasy game. As a pilot and mechanic, Cid’s dream is to go into space abroad the majestic rocket he invented and built.

In a freak accident on launch day, Cid’s partner and female friend Shera is almost killed. To save her life, Cid must abandon the launch, thereby destroying any hope he had of going into space. After the fateful event, Cid takes out his anger on Shera by making him work for her (almost like a slave), constantly barraging her with insults and curses, and chain-smoking almost more than any other videogame character in recent memory. (Heck, I wouldn’t be surprised if Cid blew that smoke in Shera’s face whenever he got the chance.)

Despite the almost uncomfortable level of his grumpy emotional abuse towards Shera, Cid shows he has a heart by forgiving her, apologizing for everything he had done, and — in a shocking twist — marrying her!

Even the grumpiest Cids have to have a heart.

Uh oh. After Cid’s divine grumpiness in Final Fantasy VII, the Cid featured in Final Fantasy VIII is a huge step down. Not that he isn’t an interesting character, but Cid Kramer is way too compassionate and clear-headed to make a good Cid. Who wants their Cid practical?

As the headmaster and overseer of Balamb Garden — a school to train mercenaries — Cid Kramer is very interesting and is the focus of a fair share of surprising plot twists. But he is also smart, classy, composed … and not at all the kind of Cid a player like me is looking for. Where is the foul-mouthed language? The grizzled beard? The grumpiness?

Just to set the record straight, Cid Fabool in Final Fantasy IX is not really playable, but the player does take control of him during a brief sequence. So while he is technically playable, he in no way has the same major role as the two Cids from Final Fantasy IV and Final Fantasy VII. With that being said, though, the section of the game that does star him is very interesting.

Why? BECAUSE HE IS A FROG! That’s right; Cid gets turned into a frog about halfway through the game when main character Zidane tries to perform a spell on him. For the brief time the player gets to control Cid, he is a frog. With a giant moustache. A grumpy, airship-creating, giant moustache-adorned frog.

Cid in Final Fantasy X has something that none of the other Cids before him have ever had: a family relationship with one of the game’s main playable characters!

Cid (again taking the single-name Cher route) is Rikku’s father, Yuna’s uncle, and leader of a renegade group of people that excel at technology. Despite the fact that he is completely bald, which is something normal Cids are not known for, his personality is just as loud and obnoxious as the best of them! Cid in Final Fantasy X feels like a completely new take on the iconic character at first sight, but quickly fits the mold as one of the best (and most memorable) Cids in the series!

I have to make a confession: I have never played Final Fantasy XI for more than a few minutes. I respect the game like crazy, but have never been a guy that can get into MMORPGs. Thank God for my friend who is obsessed with the game. He quickly filled me in on Cid’s surprising appearance in the online, completely one of a kind Final Fantasy iteration and what kind of personality he has.

Funny enough, I should have seen this coming. Cid is a bearded engineer and inventor who helps your character by creating helpful inventions and tools.

The most important question I had for my friend: Is Cid in Final Fantasy XI grumpy? The answer: “Not really. But he does seem to have an attitude.” I think that’s okay with me.

What the heck? Two Cids in one game!? What is happening?!

There are actually two major characters named Cid in Final Fantasy XII. One, Cidolfus Demen Bunansa, is the stubborn father of playable character Balthier and a researcher and inventor for the major kingdom of Archadia. The other, Al-Cid Margrace, is a romantic man and member of a prominent royal family. Can you guess which one is supposed to be the official Cid?

Yeah, it comes as no surprise that Cidolfus Bunansa is the Cid that players have come to love over the years. Not only does the Cid of Final Fantasy XII have a classic, unruly attitude, he is actually one of the game’s bosses! That is really grumpy.

Extra points for that.

What do you think? How do you feel about my equation? Do you agree that a grumpy Cid equals a better Cid?

Which Cid is your favorite? Without spoiling it by looking on the Internet, do you have guesses as to what Cid will be like in Final Fantasy XIII? Will he be a playable character? Will he have something do to with an airship?

And, most importantly, will he be grumpy?