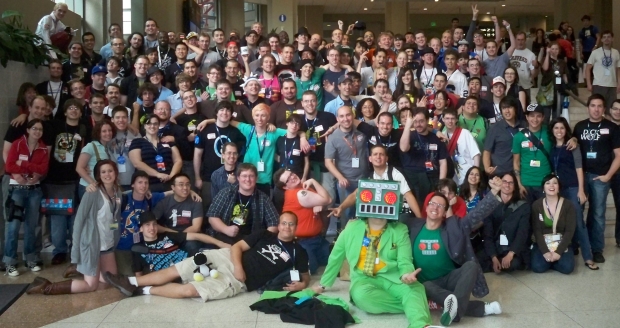 [Dtoider Blindfire tells us about the awesome feeling of playing with others, praising the collective experience of gaming as much as traditional multiplayer. Is that what brings us all here today? Want to see your own writing on the front page? Write something awesome and put it in the C Blogs. — Kauza]

Last night I sat down to play some Advanced Wanted in Assassin’s Creed: Brotherhood. Normal enough, right? I didn’t think much of it at the time either, until my brother wandered on through to see what I was up to. Two hours later, we were both still sitting there, glued to the screen. I’m playing, and he’s perched next to me like a stalwart guide; a second pair of eyes, of ears, and a second brain computing all the same information I am, independently of my own analysis. A second brain available, with different views, different cognitive structure, different needs. Not tied down by the invisible wires of execution, the thrill of the chase, or the fear of the hunt. Completely unbiased, relaxed, and aware. More than a spectator and less than a player. Something bordering on omniscient, a specter perched on my shoulder to warn me of things or provide insights that my own mortal eyes do not perceive.

There I was, strolling through the marketplace, seeking my target. A clever Doctor with a taste for the Morph ability, he was perched within a group he’d changed to look like himself. Damn! Same tactic I use when I’m in the lead, and here I am, stumped by the same problem I use to fool those on my trail; detection of any kind seems to be a rare choice for abilities in Brotherhood’s multiplayer. As I stood there, stumped as to how I was going to accomplish my task of assassination with my chosen loadout, Morph and Smoke Grenades, I took half a moment to blend with a little group and think about my problem. No solution came to mind, until my brother spoke up. 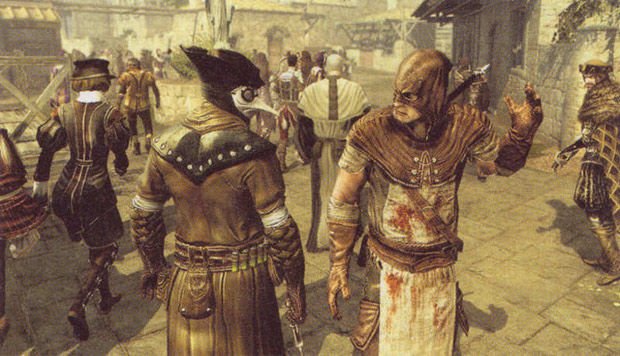 “They’re just NPCs, right? Why not walk into the group and morph them yourself? Whoever it doesn’t work on has to be your man.”

I was stunned. How had this insight escaped me? I had the tool to solve this problem, but I couldn’t see it! I was so focused, so intent on my prey that I lost sight of my own capabilities. I could not see the forest for the trees. So, I walked up into the group, morphed the lot, and was promptly hit by Fireworks and stunned in short order. But still! The insight of the moment struck me as a glorious thing, something I had to take some time to talk about. And so, here we are, fellow Dtoiders, to discuss what I will dub “The Group Dynamic” of videogames.

My brother and I have been doing this gaming… symbiosis, I suppose is a good way to put it, basically since we started playing games. Many of our early forays into the digital realm were single player only, which relegated one of us to the backseat, always. Even when the games had a cooperative option or some kind of versus, we were stuck with the single player; we didn’t have enough money for another controller. But we were both in love with gaming, and so we would sit together, one playing and the other watching intently, providing analysis and a second pair of eyes to see what the other missed, for hours on end. We became heat sinks for one another’s anger, a calming and relaxed presence to joke with and retain levity. It became natural. A habit which remains part of our lives to this day.

It extended and evolved over time. Experiences with cooperative games came into the fray with the acquisition of a second controller. Those games which allowed such play became hallmarks in our time together. Still, the symbiosis experience remained for games which did not allow such an option. Times changed, friends were made, and with that the group dynamic became more interesting. No longer was a single player game a one man experience; no one had enough money to buy all the games we wanted, for there were so many, and we often didn’t have the skill to complete any one game alone. We each bought or rented a different game and together made it through them. Weekends spent together with a small stack to bowl through, a treasure trove of experience that would mark us all. Completion of any game became a group effort. Pooled knowledge, three to five people gathered around a television, whispering suggestions, breaths held in unison when it’s down to the last shot, controller offered up and passed around as each successive attempt failed, until the inevitable generation of a strategy that would succeed.

This same thing mutated again as time went on. It got into multiplayer games for us much earlier than just the scene in Assassin’s Creed: Brotherhood I described before. Separate experiences often came together in new and unexpected ways; map knowledge became mixed, with each of us memorizing our favorite paths and briefing the other on the particulars during rounds. In Counter-Strike, we literally split some maps in half because we each preferred to take different routes; only with heads bent together did we have full knowledge of all the nooks and crannies, bends and straits. Some games only became playable because one of us dedicated ourselves to it, and tutored the other. 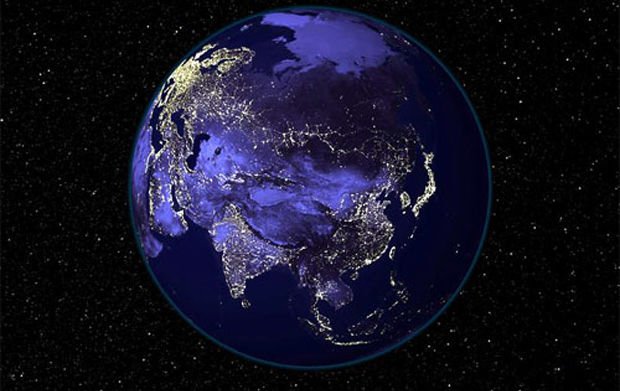 How does this happen in the medium of games? How do these experiences become something shared between so many? With multiplayer games, the effect is easy to understand and obviously intentional. But single player games? And why are videogames in particular capable of this with such ease? The same dynamic does not occur with someone playing solitaire. It would be a disjointed experience, out of place and uncomfortable. With videogames, though, somehow this thing happens where an experience meant for one can be shared by all. One person’s accomplishment being, in truth, a work of many with an easily shared sense of completion for all. It’s not like rooting for a sport, in which you are a spectator on the outside. Instead you are part of a unique sort of amalgam of experience in which you can actually participate. It’s got to be magic.

I think something about videogames strips away the things which divide us. The love for the medium casts a spell upon us that conquers all other motives, exposing within us a generosity of spirit which is otherwise seldom seen. A deep, powerful desire to pool experience, to share and to enjoy on an equal field. Today, this strange effect spreads across nations, with words of one gamer to another through FAQs, forum posts, instant messaging, voice chat programs, and youtube; cutting across national borders and sometimes even the boundaries set by language. Two pairs of eyes huddled in front of a television multiplies itself into millions, and it seems to happen without any effort or want of reward or return.

Without any kind of poking or prodding at all, we appear to find within ourselves this compulsion to share with one another and be a part of something wider and grander than just our own life. In videogames, the transition from one to two, and from two to many, is so shockingly effortless I hardly took the time to think about it before today. Consider, how much has your own experience with your games been changed by other people? Sometimes people you’ve never talked to, never seen, and may never meet!

The only thing you can know about them is that they love games, and somehow, some way, that alone is enough.

I’d like to know, how many of you experience this same thing? Not just having a spectator, but an active participant in your gameplay. Note, I’m not talking about being a guide here, providing help from a position of experience, I’m talking more about being an equal to the player. Two or more people working together to create success. Did it come as easy to you as it came to us? How much of an effect have things like FAQs and forums and communities like Destructoid had on your gaming experience?

Go on. Don’t be shy. This is about sharing experiences, after all.