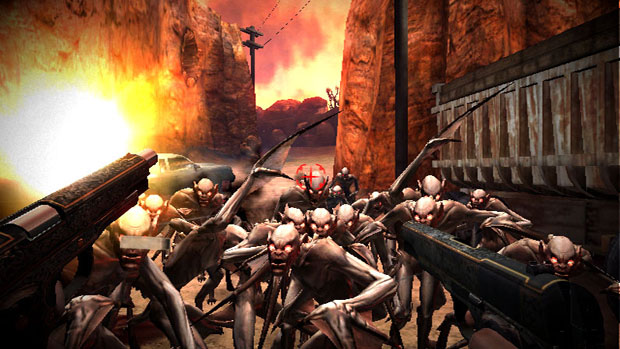 Some critics suppose High Voltage Software’s mature titles belong other platforms. A peek at the Wii’s worldwide total sales chart seemingly confirms the thought: Madworld and Call of Duty: World at War remain below High School Musical Sing it! and Link’s Crossbow Training. It’s the reality of the Wii’s base.

While we don’t see The Conduit making the platform jump anytime soon, it’s possible that High Voltage Software could tap other platforms with The Grinder and Gladiator AD. Speaking with us at Electronic Entertainment Expo 2009, High Voltage’s Dave Pellas said his studio has the dedication to bring the two titles to another platform. It’s just a matter of obtaining the cash to do it.

“We can do anything,” Pellas said. “We’ve got some very, very talented guys. And it just takes time. And dedication.”

“We have the dedication,” he continued. It would just be, ‘yes, here’s lots of money. Go make this for the PS3.’ [And we would say] ‘Thank you publisher, we will.’”

If The Grinder made the jump to PlayStation 3, single console owners would finally be able to get their hands on a proper cooperative shooter with zombies … and werewolves. Eat that, Xbox 360.