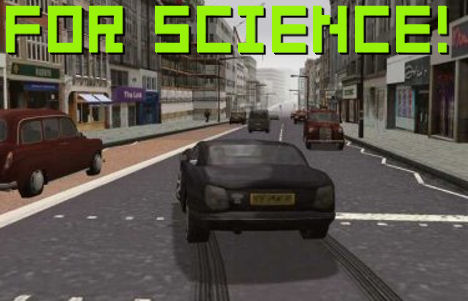 Here’s one for the science fans. Some researchers believe that our brains contain navigation systems full of grids, compasses and maps, similar to a satellite navigation system. Quite why they are so intent on proving this idea is anybody’s guess, but they’re giving it a bloody good go, and using The Getaway to do help them.

In a follow-up study, Dr Spiers and Professor Maguire used the Playstation2 video game “The Getaway” to examine how taxi drivers use their hippocampus and other brain areas when they navigate. Taxi drivers used the virtual reality simulation to navigate the streets of London whilst lying in an fMRI brain scanner. The researchers found that the hippocampus is most active when the drivers first think about their route and plan ahead. By contrast, activity in a diverse network of other brain areas increases as they encounter road blocks, spot expected landmarks, look at the view and worry about the thoughts of their customers and other drivers.

I don’t know what a hippocampus is, but the word is funny. Personally, this just strikes me as over-analysis. I think it’s pretty bloody obvious that a taxi driver knows where he’s going if he’s been driving around London for years. All this seems to be doing is proving that people know where to go if they’ve been there before, and don’t we already know that?

Still, at least people have finally found a use for The Getaway. That’s something.