As we’ve established, Genshin Impact is constantly adding new stuff to do, whether it’s additional areas to explore and quest in, or individual quests themselves. That latter bit is relevant for the new Genshin Impact Eight Locales event, which is currently going on now, and running for roughly six more days: right up until the next update hits. Think of it like a bittersweet going away party for update 2.4.

As long as you have access to Inazuma and are Adventurer Rank 30 or above, you can participate in Eight Locales Over Mountains and Seas. The crux of the questline deals with Kichiboushi: a bake-danuki destined to take over for Ioroi as the protector of the Chinju Forest. To help nudge him on that path, it’s your job to take Kichiboushi on a trip across the world, visiting places you’ve been before, showing him the sights, and instilling valuable life lessons.

It’s an ideal setup to not only usher out a major update in a low-key way, but it’s coming at a perfect point in the game’s lifespan. Genshin Impact is about a year and a half old at this point, and since then a lot of content has trickled in. There’s a ton of stories to tell and re-tell with how densely packed the zones are, so seeing a wistful storyline like this is a no-brainer.

Of course, we’ve returned to old areas in new content before. But the relaxed daily delivery system of the Genshin Impact Eight Locales quests, alongside of the lighthearted nature of Kichiboushi, and how he cantankerously riffs off of the protagonist and Paimon, fits that framework so well. So far we’ve been back to Dragonspine, Liyue, and Mondstadt, reliving old memories in a bite-sized manner that doesn’t overstay its welcome.

There’s four more quests to conquer (including the one today), and I can’t wait to try them out. If you’re a lapsed (or burnt out) player, consider logging in and doing this questline.

[Update: As of today, you can complete the entire Genshin Impact Eight Locales questline. Make sure you make the effort too, as you only have a few more days left! The final quest (embedded below) will take you to Stormterror’s Lair for a quick five minute or so exploration and conversation-based mission. You can view the rewards in the image, including a cosmetic statue for your Serenitea realm. Oh, and don’t forget to claim the season pass event quest XP reward once you’re done with Eight Locales.] 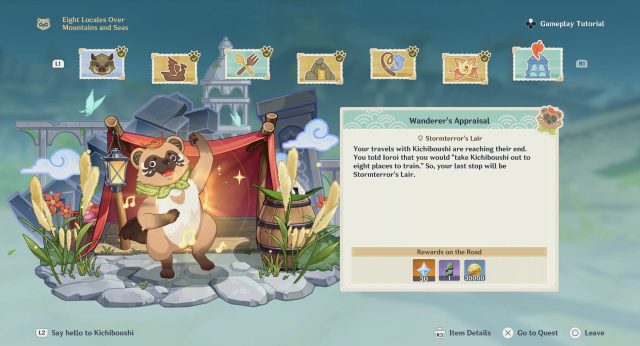