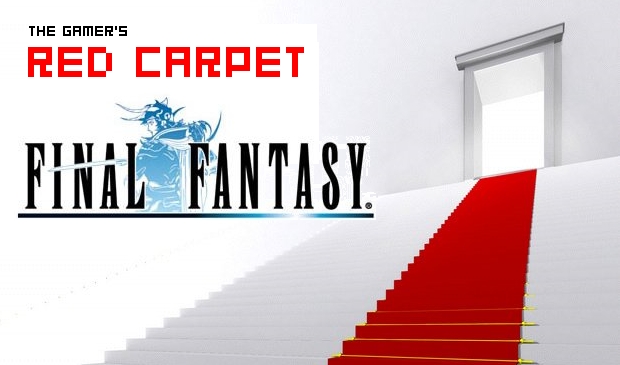 Next week marks the release of the next iteration in the revered Final Fantasy series, the highly anticipated Final Fantasy XIII. Woo hoo! To celebrate, I will be posting a trilogy of Final Fantasy-themed features all this week, each one focusing on a different aspect of what makes the series so gosh darned memorable.

Right now in Hollywood it is awards season, which finds ridiculously rich, beautiful people heaping praise on other ridiculously rich, beautiful people. One thing that comes with this barrage of awards shows is the attention celebrities get as they walk down the red carpets. And with these red carpet walks come major entertainment magazines and Web sites grading all the celebrities on how beautiful (or hideous) they are dressed.

After reading a bunch of these fashion report cards in the last few months (I am not ashamed!), I came to a realization: Why must we leave all this mindless fun to the entertainment magazines? Why aren’t videogame outlets grading the fashions of videogame characters?

Well, that’s where I step in. I have officially decided to become the Joan Rivers of the videogame world and introduce this new feature series to the world. Do I have any fashion credentials? Nope, none at all. But that doesn’t mean I can’t tell if a videogame character’s outfit is “fierce” or an all-around “hot mess.” (Am I doing this right?)

Obviously the best first candidate to introduce this ridiculous new series is Final Fantasy. With Final Fantasy XIII coming out next week, I thought it would be great to look back over the years at the best and worst styles to come out of the wildly successful role-playing game series known for its outrageous in-game costumes.

Hit the jump as I grade the “red carpet” fashions of twelve of the most memorably dressed Final Fantasy characters. 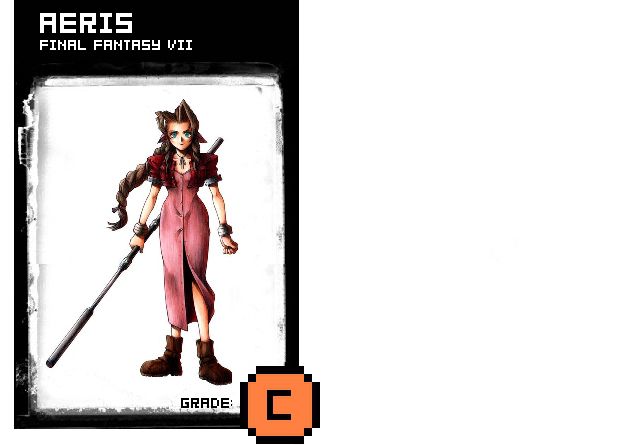 Aeris scores some big points for her very fashion-forward combination of red and pink. This color combo, previously thought to be horribly tacky, is making a huge comeback on the bold, color-friendly runways of today. The famous Final Fantasy VII heroine also wins with her beautiful, chunky bracelets that compliment her long, braided hair.

These striking fashion decisions, though, are completely ruined by Aeris’s huge brown work boots. What was she thinking?! Sure, they may be a more practical choice for hiking the mountains and forests surrounding Midgar, but who cares about practicality when you are starring in one of the most fashion-conscious videogame series in history.

A pair of high, ribbon-tied red shoes would have perfectly brought her outfit together. 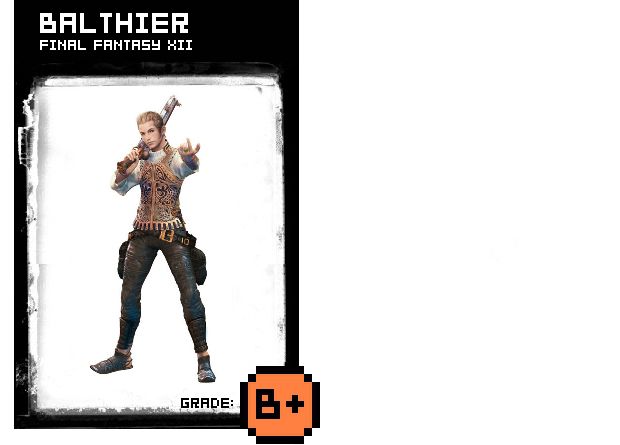 Balthier is badass. Only someone as cool as him could pull off tight, leather, embroidered pants, a patterned bustier, and a mock wool turtleneck. Somehow all of these elements work together, resulting in one of the best male outfits in the Final Fantasy universe. And don’t even get me started on those fantastic backless sandals!

Points deducted for the 80s jelly rings and bracelets and odd, teardrop earring. Other than those tacky accessories, though, Balthier is making it work. 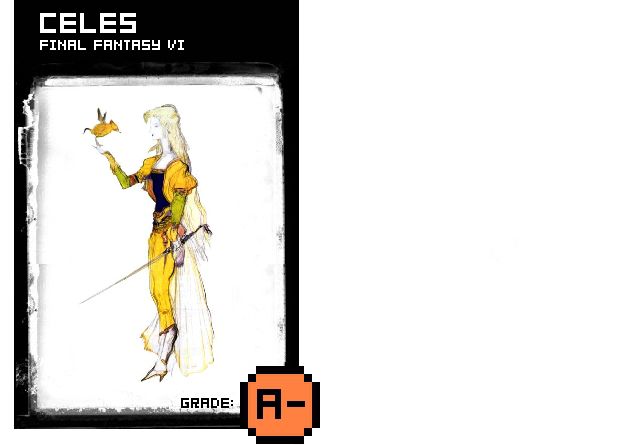 Rich, striking colors and flowing fabrics make Celes’s outfit in Final Fantasy VI a winner. The deep navy blue top is the perfect contrast to the yellow Chocobo jacket and matching pants. It would be tough for some people to pull off colors like this, but Celes’s fair skin works with the outfit, complimenting the attention-grabbing clothes rather than fighting with them.

Major props also have to go out to the outfit’s light-colored train, which perfectly blends in with Celes’s washed-out blonde hair. 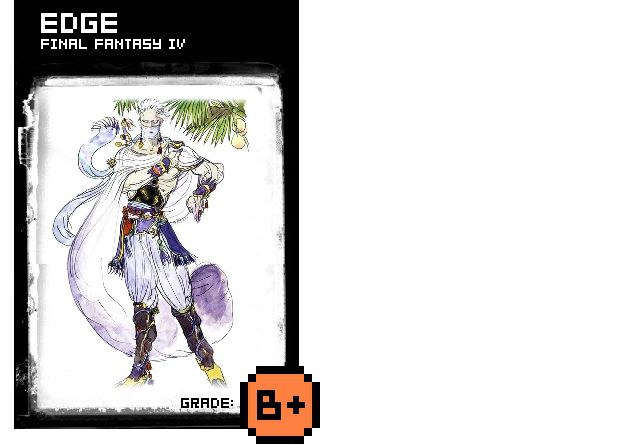 Who knew cocky, ladies man Edge from Final Fantasy IV would be leading the way with some intelligent fashion choices? The puffy pants are a little to “M.C. Hammer meets Aladdin”, but stuffing them into complex, stunningly constructed boots makes everything all better. Couple all this with the draped top and ridiculously oversized scarf, and you have a winning outfit. I wager men’s scarves will pop up on many videogame characters in the near future. They’re the new rage!

Fighting in something like this may be near-impossible, but who cares when you look so good?! 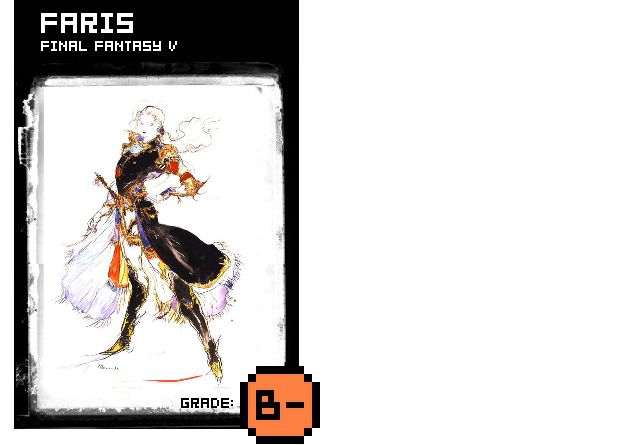 In Final Fantasy V, Faris is a very complicated character (I won’t ruin the shocking twist for people who haven’t played the game). Because of this, Faris’s outfit has to be equally as interesting.

The mysterious pirate’s fashion choices pull of this intrigue … to a point.

No one can deny the stunning stitching and brave color used in the giant overcoat, but the too high boots and completely out-of-style raised collar hold back what could have been an absolute knockout outfit. Regardless, Faris gets respect for taking a traditional pirate look and making it different. 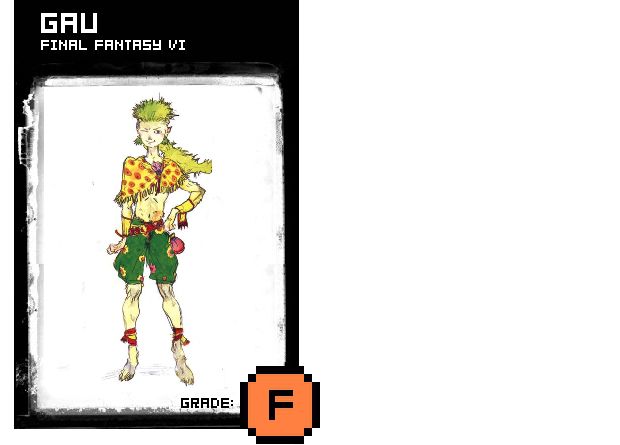 Yikes! Gau’s outfit actually hurts my eyes. No offense to Gau himself. I love him. I love (love!) Final Fantasy VI … but where to begin with this undeniable fiasco?

First off, there are the oversized, flower print shorts and awful red belt. And then there is the ridiculous shawl that, I guess, doubles as a shirt. If the polka dots and Mrs. Roper-esque frayed edges weren’t bad enough, the entire thing is clipped together with a purple brooch in the shape of a lion’s head. And don’t even get me started on Gau’s hairstyle! What. The. Heck.

Gau’s outfit is so bad that I can’t even think of a way to improve it! 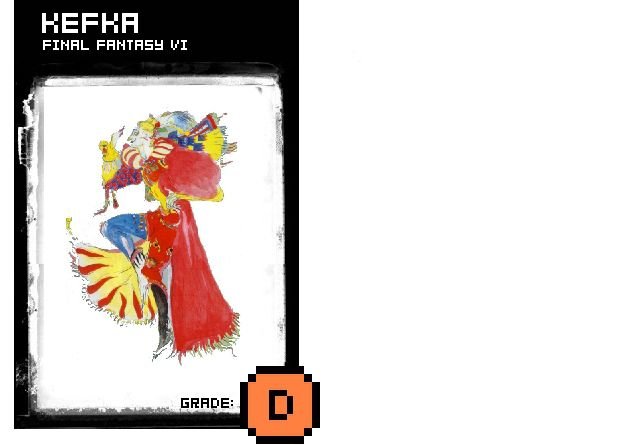 *sigh* As much as I want to love Kefka’s crazy outfit, I just can’t pretend it is anything other than a huge mess. I mean, Kefka is out of control — he might be the greatest Final Fantasy villain ever! — so one would think he needs an insane costume to match his even more insane personality. But this is taking things too far.

Just look at what he is wearing! The overabundance of primary colors! The 47 different patterns! The gigantic sleeves! I know Kefka is supposed to look like a crazy clown (I guess?), but this is just ridiculous. 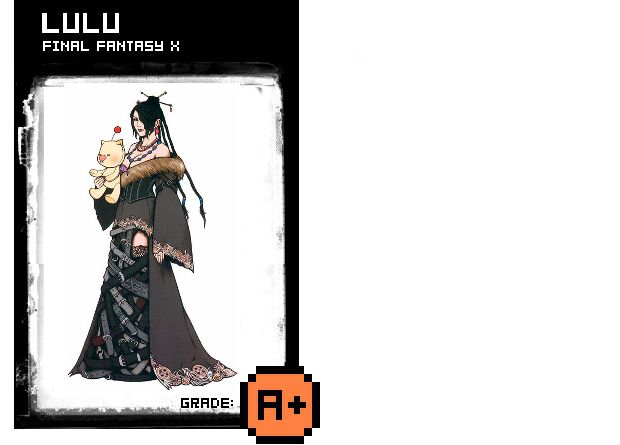 Hands down, the greatest outfit in the history of Final Fantasy. IT’S A DRESS MADE OUT OF BELTS, FOR CRYING OUT LOUD!

Made out of belts.

I love you for wearing this, Lulu. 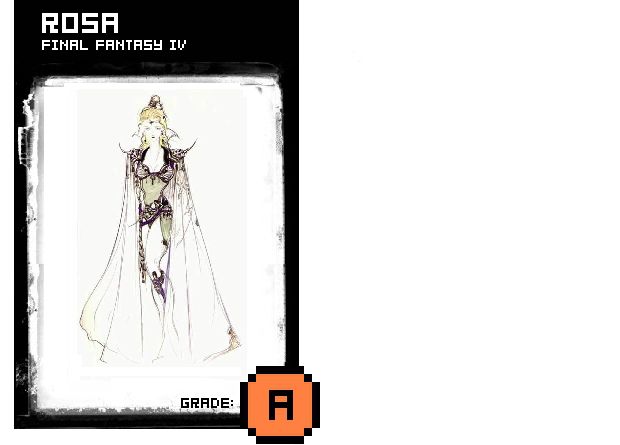 A class act all the way.

While Rosa’s overall outfit is a little too revealing, the presentation is absolutely flawless. The long, simple white cloak screams “white mage,” while the surprise interior armor proves that Rosa means business. The dark grays and purples that line the sharp, perfectly shaped armor are sublime compliments to the bright white cloak that beautifully trails down Rosa’s back.

All white mages need to take a lesson in how to dress from Rosa. 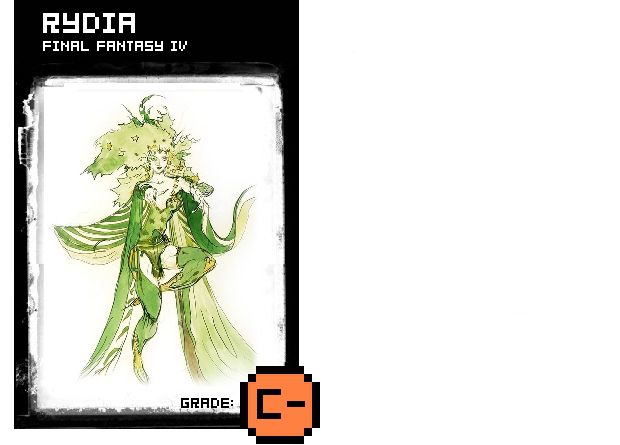 Green is a tough color to pull off, but Rydia from Final Fantasy IV is mildly successful with her brave fashion choice. On a positive note, the multiple shades and different layers of draping provide a pleasing depth to an otherwise busy outfit — the lone ribbons that descend from the sleeves blend in nicely with Rydia’s cape.

But aside from a few fleeting moments of brilliance, Rydia’s outfit lacks a cohesiveness to really work. Looking past the unkempt hair (if that is possible), a couple glaring negatives stand out. First off, the star-patterned bustier does not fit in with the long lines present in the rest of the outfit. And most unfortunate is the ridiculously inappropriate underwear (?) combined with the tall, skin tight leggings. Revealing a small portion of upper thigh is never a good look. 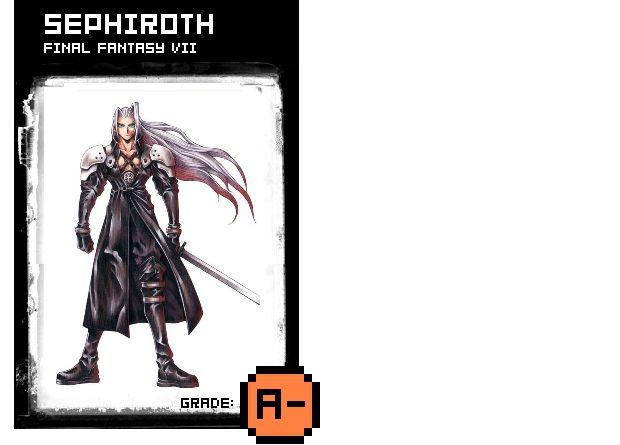 Now this is how to dress like a villain!

Whereas Kefka wears an outfit so ghastly it almost hurts your eyes, classic antagonist Sephiroth chooses to keep things more focused. The all black leather jacket is as stunning as it is intimidating, while the oversized metal shoulder guards are wonderfully complimented by the patterned chest armor. Never mind the fact that Sephiroth’s gorgeous silver hair matches the entire outfit perfectly! And then there are the tall strapped boots?! Ah! The entire outfit is winning!

No other villain in the Final Fantasy universe has a sense of style as sophisticated as Sephiroth. 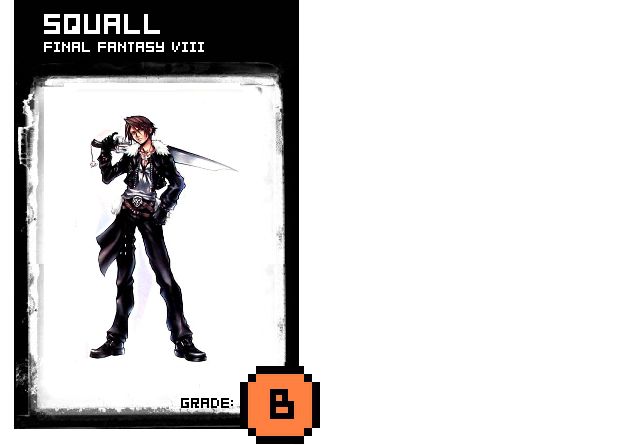 If Squall’s outfit wasn’t so simple overall, it could easily be ranked the best example of men’s fashion in all the Final Fantasy games. But outside of Squall’s incredible jacket, not much is going on. And, man, what a jacket! Let’s just focus on that for a second. The fur (hopefully faux) collar; the thick zipper. Such a great piece!

Squall gets some extra points for the crazy belt combination, but other than that and the jacket, his outfit amounts to not much more than a t-shirt and jeans.

How would you rate each of these “red carpet” fashion choices? Which is your favorite? Your least favorite? What is it about Final Fantasy costumes that make them so memorable?

And what do you think about this new feature series? What videogame fashion should I tackle next? Remember, Virtual Tim Gunn hates negativity!