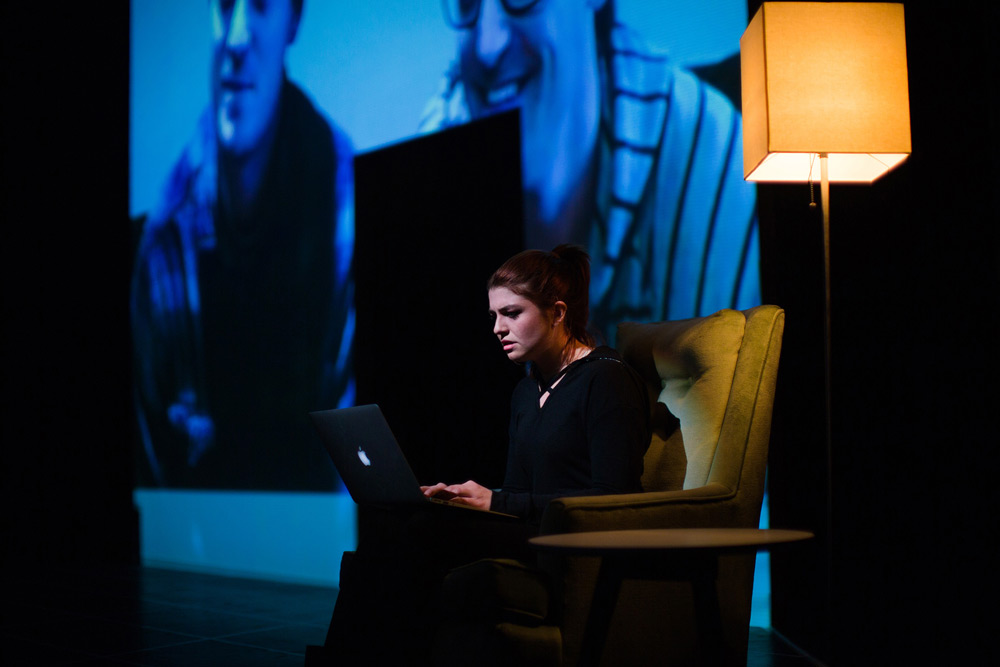 Online harassement, live and on stage!

“When the Bay Area announced [the play] was going to get workshopped last summer, the Tweet announcing it included ‘hashtag Gamergate,’ so immediately that made it to Reddit and I was heading into work when all of the sudden I had 40 Twitter notifications,” playwright Walt McGough explained to me the afternoon after his most recent play, Non-Player Character, wrapped up its debut run at the Children’s Creativity Museum theater in San Francisco. I was there on closing night, sitting in the front row, after a single tweet from the SF Playhouse Twitter account somehow appeared on my feed with the word ‘Gamergate’ front and center. And as I took my seat within tripping distance of the actors, I anticipated nothing more than the absolute worst.

The absolute worst, in regards to Gamergate and fictional stories inspired by it, would be the “Intimidation Game” episode of Law & Order: SVU. That show really hasn’t been good since Christopher Meloni left to pursue political arguments on Twitter — and even when he was on it, SVU writers valued hard-to-believe twists over simple, effective storytelling — but its take on Gamergate was an absolute dumpster fire. So over-the-top, so audacious in its interpretation of gamers, the industry, and the controversy, it makes its Rihanna/Chris Brown episode look well-researched and grounded. Its only redeeming factor was it cast Logan Paul as an asshole in the episode months before he cast himself as that in real life.

That was my expectation, and thankfully the play wasn’t 90 minutes of unwatchable garbage. Whereas “Intimidation Game” sought to entertain through ridiculous fantasy, Non-Player Character offers a more restrained interpretation of the origins of the controversy. So restrained that, in fact, the end result is a production that doesn’t have much to do with actual Gamergate. 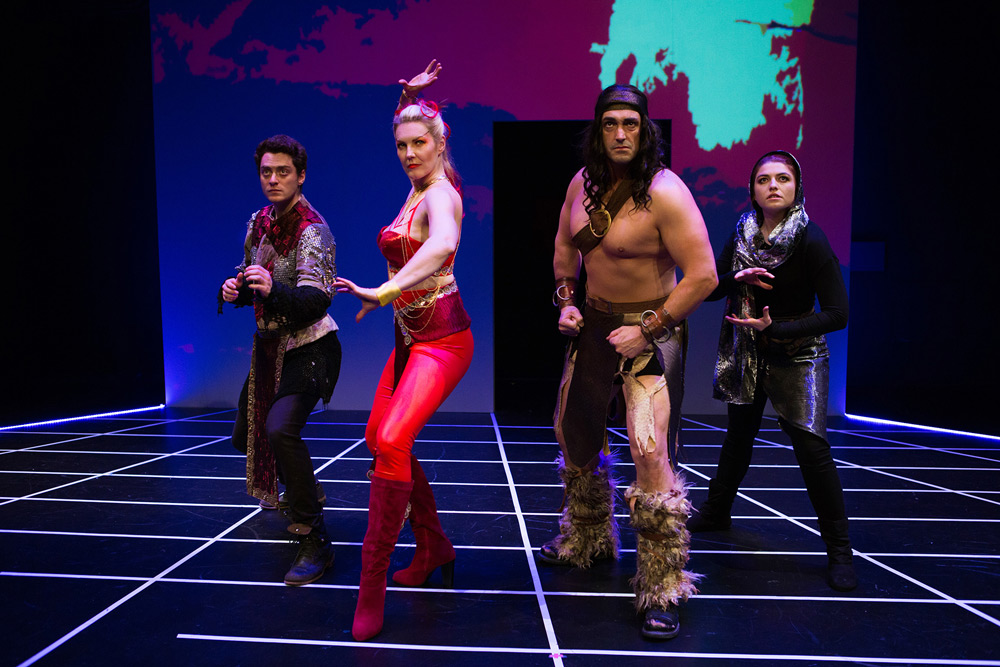 NPC features Katja, a no-nonsense coder working at Starbucks in Seattle as she develops her own game in her spare time. Katja’s game, a work in progress, aims to be a world-builder where everything you create in it has its own story. The more you build, the more the stories intertwine, until you’ve crafted the entire narrative of this land you make. In other words, it’s an artsy-fartsy, high-brow concept that sounds like a mixture of Dreams and Where The Water Tastes Like Wine.

A few scenes of the two-act play are spent in Katja’s game, as well as in the online multiplayer ‘SpearLight’ where the actors mimic actions their avatars perform while music from The Legend of Zelda plays in the background. Because the set is so sparse, a massive screen sits in the back of the stage where the necessary visuals are projected. It’s a great effect. When Katja, portrayed with exquisite nuance by Emily Radosevich, pencils into the air to create a tree in her game, the audience sees it brought to life on the massive screen. It’s a clever way to handle quick changes in scenery with the small budgets Sandbox plays are given.

The entirety of the first act establishes Katja’s relationship with Trent, her best friend from Lancaster, PA. Whereas Katja is smart, resourceful and driven, Trent is one of a few stereotypical characters seen in the play. He’s what non-gamers picture all gamers to be: a jobless, aimless, slacker who still lives at home with his parents playing video games and perusing 10Click — this play’s version of 4Chan.

The two have a friendly relationship that took a hit when Katja moved away and further crumbles to dust when she’s introduced to Feldrick, an amalgamation of every asshole you’ve met online. He’s crude, boorish, sexist, and a bit homophobic, providing the perfect fodder for man-playing-as-sexy-female-avatar cybersex jokes The Big Bang Theory was making eight years ago. When he galumphs onto the stage, shirtless as his barbarian avatar in ‘SpearLight’ is, you can tell where this is going. His obnoxiousness furthers the rift between Katja and Trent, ending their friendship. Act I wraps up with Trent promising in a video to expose everything about Katja as some form of justice. Act II starts sometime after that, as Katja deals with an endless series of internet assholes stalking and threatening her.

At intermission, I wondered just how faithful to the real-life situation of Zoë Quinn and Eron Gjoni this play would run. It’s a work of fiction, but one that hues closely to an actual event from our recent history. Like Law & Order, certain creative liberties are expected. At the end of the play I got my answer: Non-Player Character is only loosely based on the actual events that plagued the industry a few years ago.

The word Gamergate is never spoken. There is no condemnation of the gaming press as they’re not the ones Trent accuses Katja of sleeping with for personal gain. There’s no ethics in anything here. Instead of tackling the issue, the playwright uses it as a stepping stone to talk about online harassment in general.

I pulled McGough away from an afternoon of Wasteland 2 to find out how a product inspired by the breakout of Gamergate ended up leaving its source material behind.

“I remember I was at a friend’s wedding in Chicago when Gamergate sort of blew up,” McGough said. “I just remember being completely riveted by it and following it on Twitter and really just wanting to talk about it. Shortly before that was the Elliot Rodger shooting at UCSB, which was the guy who shot up a sorority because he said women wouldn’t date him. Something about those two blended together and it became this conversation I really wanted to have. The more that I worked on it, the further and further it got away from specifically Gamergate and became more and more an individual story about this specific character encountering abuse online.”

That abuse makes up the bulk of Act II, an incredibly short three scenes intercut with increasingly erratic YouTube videos starring Trent and Feldrick. With the campaign against her in full swing, Katja finds solace and safety at her boss’s home. As the crude comments about her light up the massive screen behind her, she takes her situation to a concerned but powerless police officer and eventually finds strength when she absolutely unloads on a stranger who came asking for her by name. Non-Player Character ends openly, with both Katja and Trent continuing down their paths without conclusion.

“There was no way, feasibly, to end the play on a note that is like ‘And now it’s better, now she’s done, she’ll never have to deal with it again,'” McGough explained. “That doesn’t happen. This is still happening and I wanted to be true to that. In talking with Lauren [English, the play’s director], I think we decided the most optimistic ending we can get for this is to see her empowered and ready to make her own art, to not let this thing that happens to her drive her out of the industry entirely.”

Seeing Katja give up on her dream would have been a dour note to end the play on, but act II is so expeditious I couldn’t help but feel as though McGough ran out of time before the show’s premiere. The jump from ‘Katja afraid to leave her home’ to ‘Katja absolutely slaying a stranger at Starbucks’ is choppy at best. Sure, her fuck-filled speech is incredible to watch, but when I realized it marked the final moments of the production I wondered where the rest of the play was. Despite saying she was scared, Radosevich was never really given a chance to show the kind of fear and paranoia that would come with strangers texting you pictures of your front door or sending grotesque photoshops to your parents.

“A lot of the compactness was that I didn’t want to spend a lot of time reveling in the abuse that happens,” McGough said. “I wanted to replicate for an audience that’s not as familiar with gaming or social media some of what that can feel like. Sort of overwhelmingness and that constant barrage that people deal with when they’re subject to that kind of abuse. But I didn’t just want to stew in it and leave a long stretch of time where we just watch a character be inactive and just absorb abuse.”

When that original tweet went live, announcing the play with the Gamergate hashtag, McGough said several people got in contact with him to “make sure he knew exactly what Gamergate was” and to find out if it was pro- or anti-. Turns out, the play is neither. Non-Player Character invokes Gamergate and the emotions around it without feeling an obligation to fully explore its far-reaching consequences. This thing is always going to be the ‘Gamergate play,’ yet the actual production is a non-specific Cliff Notes version of what happened, perfectly digestible for an audience that might not be as in tune with gamer culture as we are. Despite clear inspiration, the lack of a grip on the intricacies of the controversy means, theoretically, McGough could rewrite Katja as a vlogger, or a musician, or just a woman with a popular Instagram page because, boiled down, this play is simply about strangers being dicks to a woman online.

If you’d like to see the production for yourself, a truncated version of the play will be part of Yale School of Drama Cabaret production this Spring. McGough is also in discussion with other playhouses around the country to stage further runs of the show.