Remember that magazine that we announced a little while ago? We won’t be mad at you if you don’t. The good news is, we haven’t forgotten about it. In fact, we’ve been working with the crew at GameFan day and night for almost two month now in order to get our first issue out the door, and it’s (finally) looking like we’ll be ready to launch within the week.

Our main goal with the magazine has been to give you content that will be worth reading and rereading for years to come. We can’t compete with the pace of video game blogs like this one, so we didn’t even try. While there is plenty of great news to be found in our debut issue, the focus is squarely set on providing evergreen content that will be just as fun, if not more fun, to read next Christmas as it will be to read next week.

So is we did our jobs right, GameFan/Destructoid will be packed with the kind of stuff you’ll want to keep on your bookshelf, hold in your hands, or even share with friends (through the now antiquated physical act of “lending”) for years to come. But beware kids, unlike opening an email attachment, it can be more dangerous to give physical items to strangers than to receive them. You may not be at risk of getting a nasty computer virus, but you probably won’t get your magazine back either, so only lend to those you trust. 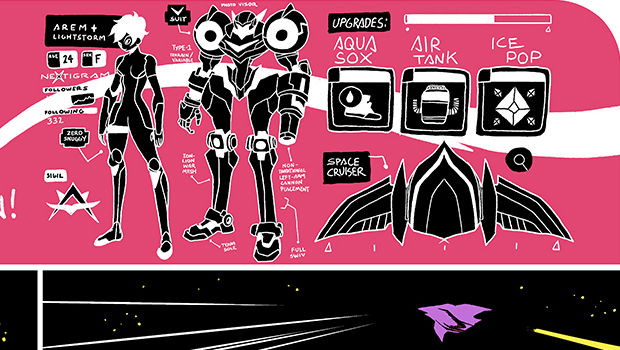 The biggest feature on the Dtoid side of the magazine is the Super Smash Bros. for the 3DS and Wii U mini-strategy guide by Gonzalo ‘ZeRo’ Barrios (the game’s reigning world champion) and friends, with character profile art by Corey ‘Reyyy’ Lewis. Reyyy also provided us with an all new, all color Arem story. In case you hadn’t heard, Arem Lightstorm is a re-imagined version of Samus Aran, but instead of being a bounty hunter, she’s a nature photographer. She’s pretty amazing.

We also have a in-depth study of Nintendo’s dysfunctional relationship with the Mother/Earthbound series (featuring original artwork from the Fangamer team), a behind the scenes look at the longtime partnership of Mariel Cartwright (Skullgirls: Encore) and Adam Tierney (WayForward), some custom Street Fighter V sprite artwork to go along with our preview of the game, and a beautiful cover story on Bloodstained, featuring never before seen art and exclusive interviews with director Koji Igarashi and artist Yuji Natsume.

And that’s all just on the Destructoid side of the mag! On the GameFan side, we have a tons of exclusive news, editorial, reviews, a wrap up of all the biggest announcements from E3, and so much more. We did everything we could to make this magazine something that you’ll be proud to add to your collection of video game things. and I can’t even tell you how excited I am for you to finally see it for yourself.