I’d better get this out of the way first: When I first decided to write this blog (months ago at this point. Hey, things got busy), the entire Internet was hanging on every Epic Mickey reveal that came its way. Then, the screenshots were released, and the “MOAR LIKE EPIC FAIL” jokes began. I’m still optimistic (especially after listening to this commentary from Warren Spector, which happens to mention that “the art style is still being honed,” and watching that awesome press conference NihonTiger linked to) that when the game is released next Fall, it will look great. Besides, I doubt that the game has suddenly become “less dark” than the concept art. Spector has said that most of what we’ve seen so far comes from early in the game, and that later areas are more twisted.

But as you’ve probably gathered from the title, the purpose of this blog isn’t for me to be an apologist for a game I haven’t played. I’m just going to tell you why I think that Epic Mickey may be the most important game released this year. No, really.

In the interest of full disclosure, I must admit this (as I have before): I am a Disney fanboy. Like everyone else in the world, I grew up watching Disney’s movies, cartoons, and Sing-Along-Song videos (anyone else remember those?). In pre-school, I’d spend my free time drawing ghosts from the Haunted Mansion. My family eventually moved to a town about half an hour from Walt Disney World, got Annual Passes, and spent many a Saturday roaming the parks. As I got older, instead of growing out of it like a normal teenage boy, I grew to love Disney more and more. I now own a dozen or more books about the history of the company (particularly the theme parks), four biographies of Walt Disney, and got stock for my 21st birthday. My dream job would be Imagineering.

What does my obsession mean? Two things. First, I am probably pre-disposed to be very interested in this game. Second, I am just as apt to look at it with a critical eye.

Ready for an animation history lesson? Then here we go.

When the first concept art was leaked, I reacted with equal parts “This is awesome!” and “Why are they turning the Country Bears into horrible robot-scorpion-beasts?” 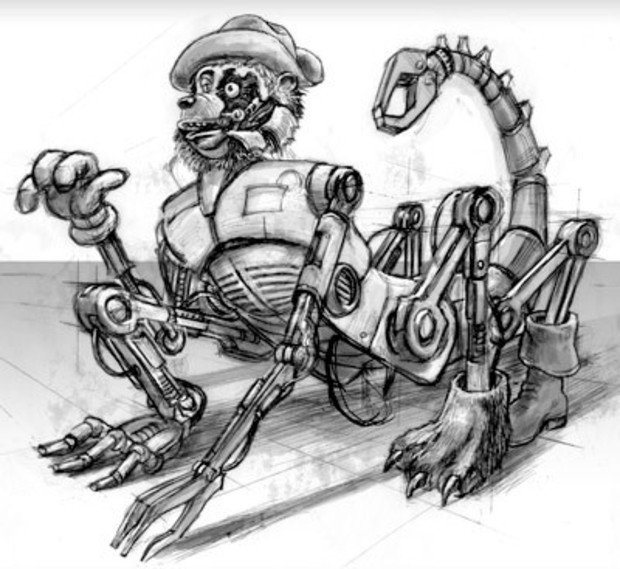 “There was blooooooood on the saddle….”

I honestly wasn’t sure what to think. But as time went on, and more and more images were released, I began to come around. This, I thought, had the chance to be something really unique, and I was surprised and delighted that Disney would take such a risk with its most iconic characters. Little did I know how much of a risk they’d be taking. 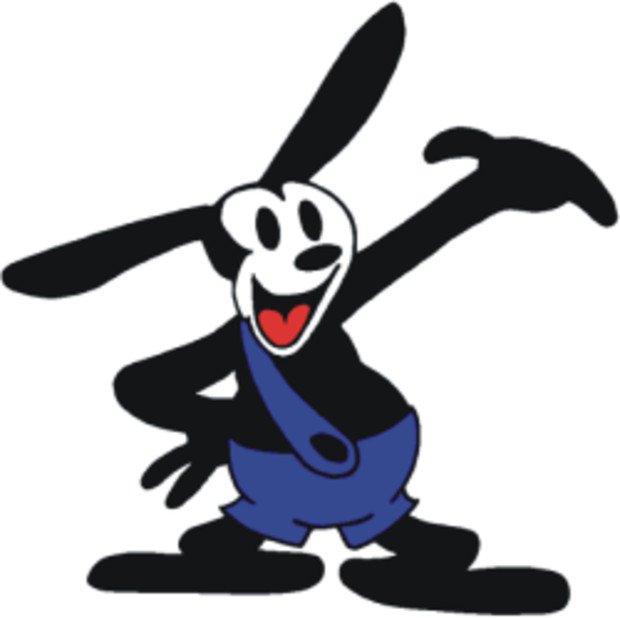 When details of the game’s plot began to leak, I couldn’t believe what I was hearing. Oswald the Lucky Rabbit, Walt Disney’s first cartoon star, was slated to be the game’s primary antagonist. To most people, Oswald is a forgotten character, a mere footnote in the Mickey Mouse story. But for a brief period of time in the late 1920s, Oswald was one of the biggest cartoon stars in the world. His gag-a-second adventures influenced everything from Disney’s later cartoons to the Looney Tunes (many of Oswald’s animators went on to work for Warner Bros. and other studios). But due to a technicality in Walt’s deal with Universal (Oswald’s distributor), and his unwillingness to compromise over budget issues, Universal took complete control of the character, and to add insult to injury, secretly hired away all but one of Walt’s animators, Ub Iwerks. Bitterly ending his relationship with Universal, Walt vowed that from then on, he would retain control of all of his characters. He and Ub secretly collaborated on a new character, who would quickly eclipse Oswald: Mickey Mouse. Though Universal continued to use Oswald through the 1950s, he never matched his early popularity, or that of his successor. 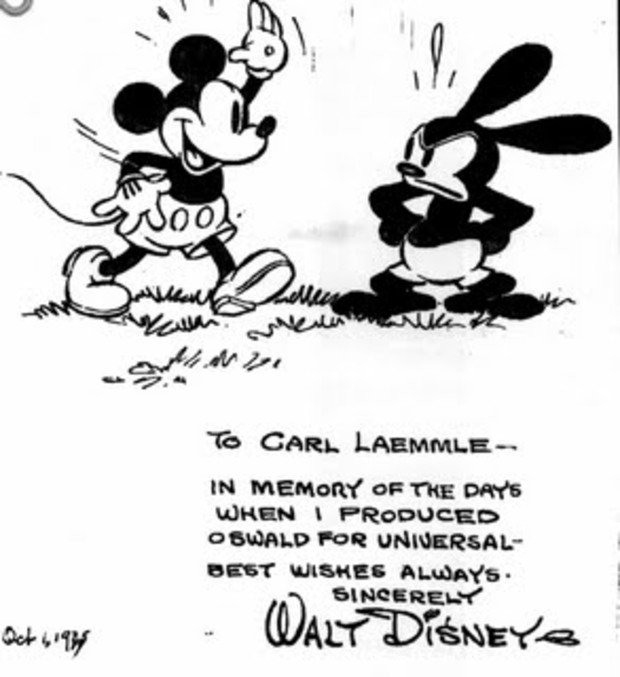 The only time a Disney artist drew Oswald after 1928… Walt seems to be giving Universal a metaphorical middle finger. And look how angry Oswald looks. Warren Spector has called this picture the essence of Epic Mickey.

Say what you will about the Walt Disney Company, but for a multinational media conglomerate, they generally have a lot of respect for their history. The Disney archives are extensive. Almost anything relating to Walt’s life or the company’s history can be found within. As you can imagine, it was a constant source of annoyance that Walt’s very first character belonged to Universal. So in 2006, when NBC (owned by Universal) wanted ABC NFL commentator Al Michaels to join their Sunday night team, Disney struck a deal: in addition to various sports-related concessions, they wanted Oswald back. NBC agreed to the terms. Al Michaels moved to NBC, and Oswald was once again a Disney character. This raised an interesting question: how would Disney reintroduce the character? Other than a DVD release, Disney didn’t do much with its newly-acquired rabbit star, reportedly wanting to “make a big splash” with his return.

In addition to reintroducing Oswald to the world, Spector has stated that his other main goal with Epic Mickey is “making Mickey cool again.” This is no simple feat. At one point, Mickey Mouse was Hollywood’s biggest star (seriously), and is still possibly the most recognized character in the world (who doesn’t recognize the three-circle outline as Mickey’s head?). However, in many ways, his personality has decayed over the years. In the first decades of his existence, Mickey was adventurous, mischievous, and sometimes downright nasty. As time went on, his personality was split up among other characters (for example, his temper went to Donald Duck), and he became the straight mouse to a larger cast of characters. By the end of the century, Mickey wasn’t so much a character as an icon, little-used outside of theme parks and merchandise. Although there were attempts to revitalize the character (for example, the comparatively edgy 1995 cartoon Runaway Brain), for the most part, Disney was unwilling to tamper with its most iconic character.

Now, however, Disney has changed its tune, and is ready to give Mickey a makeover of sorts (more of a rebirth, really): instead of the clean-cut, goody-two-shoes Mickey Mouse we’ve seen for so long, Mickey will be returning to his roots as a mischievous (if not well-intentioned) rascal. It’s all part of a large-scale, cross-company reimagining of one of the most beloved characters in the entire world. And with what is Disney leading this project? Not a movie, TV show, or theme park ride, as Disney (a “traditional” entertainment company) is most known for, but with a video game. Epic Mickey will be the world’s first glimpse at the revitalized Mickey Mouse. It’s almost shocking, really. The reinvention of Mickey Mouse, a character beloved for more than 80 years, begins in a video game? I could barely believe it.

But Disney wouldn’t leave this monumental task in just anybody’s hands. Warren Spector, while mostly known for mature works such as Deus Ex, is a huge Disney fan. He grew up watching Disney films, dreamed of being an Imagineer, and received stock in the company as a graduation gift (the man is my new hero). In interviews, he has shown an expansive knowledge and respect for Disney’s history. His vision of Mickey’s future is rooted in the character’s mischievous past. While a change from the white-washed Mickey that exists now, in many ways it will be truer to his roots than ever before.

Not that it needed it, but I feel like the trust that Disney is putting in Spector and his team to reintroduce and reimagine not one, but two characters that are hugely important to the legacy of both the company and its revered founder is just another sign that video games are being viewed as a legitimate form of entertainment by media companies. If it were simply another Mickey Mouse game, one could argue that Disney saw an opportunity to make money and ran with it. Obviously, money is part of it. But to completely retool the character, using the medium of video games as a starting point? That’s a whole ‘nother story. The reinvention of Mickey Mouse, the most recognizable cartoon character in the world, is a huge deal, and at the forefront of this story is a video game. Sounds pretty important to me.