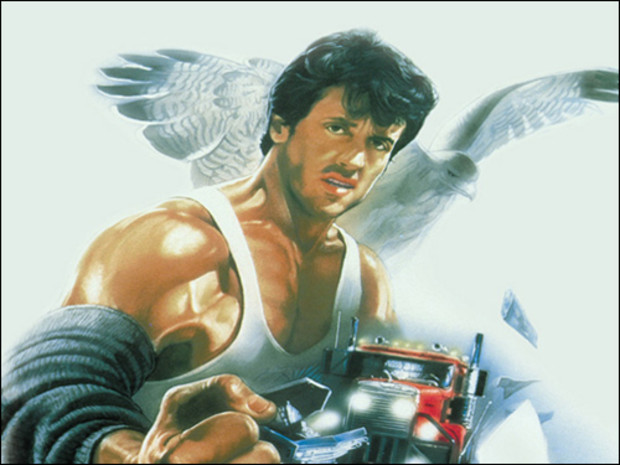 Sadly, this entry has little to nothing to do with Stallone’s best film of all time, where he plays a rough-and-tumble long-haul truck driver who arm wrestles his way into his estranged son’s heart. Sadly. Maybe I’ll post later about how this film desperately needs a game.

This is about the future. And when I look at the progress and change of blockbuster titles these days, I’m noticing a slowly rising trend. It’s not necessarily a bad thing, if done with proper respect or in a tongue-and-cheek sort of way, but what concerns me is a disturbing trend of game designers throwing caution to the wind in a wild attempt to out-do themselves.

I’m talking putting explosions on more explosions. Guns with guns taped to other guns taped to a chainsaw. Ramping a motorcycle made of super-models off the face of a cyber-demon you just utterly destroyed with three rocket launchers fired simultaneously. And you’re thinking correctly. You fired the third with your penis.

This may seem like a bizarre statement to make, considering my first Monthly Musing installment was about a return to the nonsensical insanity of old-school games. And that hasn’t changed. There always needs to be games that don’t take themselves seriously in the slightest and provide you with the chance to shoot a velociraptor with a grenade launcher. Games that embrace a wild disregard to sanity are almost a genre in themselves. I’m talking about games that aren’t some self-aware farce, but tried-and-true action adventure thrillers that mean to deliver you a solid and compelling experience.

Don’t misinterpret my misgivings as a put-down to the idea of senseless violence and blowing shit up. I’m no pinko commie. I love the ludicrous nonsense of a good action game, stripping away important plot elements and character design to have the protagonist fight a fleet of generic bad guys with shotguns taped to his wrists. (Why isn’t this a thing yet?) I love a good exploitation film as much as the next guy, packed with senseless bloodshed and random nudity. There’s something to be said for bypassing the convoluted nature of producing thought-provoking works and instead dealing with the reader/listener/viewer/player with directness on a primal level and providing them with pure, unadulterated entertainment.

But there is such a thing as taking this whole notion too far. Just as shooting a gun that uses sharks rather than bullets is incredible, so is taking away the player’s gun entirely and forcing them to rethink how they fight. Undermine their abilities so that they can see the real power behind them. But this doesn’t seem to be the mentality of modern gaming. Instead, game design these days has adopted a system of just stacking more of what already works on top of itself. If giving the player the ability to stab an enemy with one wrist-knife works, give them two. If they like cutting down an enemy’s torso with their chainsaw gun, don’t change it up and give them inventive ways to use it, but rather just let them do it from the dick-up instead. Fuck yeah.

The Modern Warfare franchise can be cited here as a prime example of this. Before I begin, that me make note that I’m not condemning the series at all. I found both games to be heart-pounding, well-built, intense experience in their own right. But there was a pretty massive shift in the tempo and tone in just the short jump from the first game to the second. For instance, one of the most talked about moments of the Call of Duty 4 was the nuclear detonation sequence. So many games previously had tasked you with dealing with weapons of mass destruction in the past. Usually, though, avoiding explosions was your ultimate goal and any failure to achieve this would result in game over. So players had no frame of reference to even think the designers would actually let one go off, much less with the player still in the blast radius. And then to have the player control the protagonist, barely clinging to life, as they fumble out of a wrecked chopper just to limp helplessly in the fallout to an ultimate, unavoidable end was brilliant.

So when the sequel came out and featured another moment of nuclear detonation, the whole thing had a different taste to it. There was no moment of quiet shock at the whole experience like the previous had instilled. Sure, raining helicopters was really bad-ass, but we lost this moment of unfettered surprise and had it replaced with excessive shock-and-awe. The game continues this theme, tossing you into repeated moments of outlandish battles throughout our nation’s invaded capital, but we aren’t meant to linger here. Each mission shows us only a glimpse of the situation and then sends us right on track to run through burning buildings and launch missiles at seventeen helicopters.

So what does this have to do with the future of gaming? Well, it shows that these blockbuster games have have a certain mindset. One that has been working. That the name of the game isn’t creative new ways to intrigue and engage the player, but instead take the old formula and give it a Red Bull enema. Take everything that worked and make it times two. Or twenty. And if we get too ingrained in this process of game design, we risk turning the whole action experience into a farce on itself. And on an unintentional level. Games like Condemned start off as tense, uncomfortable experiences where the game’s enemies ambush you and retreat, constantly dwindling your ammunition and composure. Then the sequel lets you shoot sound-waves from your mouth to explode the heads of homeless folk and demons or something. This is what I’m talking about.

Another blockbuster, Grand Theft Auto IV, shows a great microcosm of this phenomenon. The original game released back in April of 2008 demonstrated some serious restraint in comparison to previous titles. Tanks were omitted, weapons toned down, difficulty notched up, and a strong emphasis on a somewhat unwilling and conflicted protagonist. The first of two DLC packages to follow, The Lost and the Damned, ratcheted things up a bit featuring a much faster and grittier experience while still maintaining a well-balanced story. The third release, The Ballad of Gay Tony, essentially stripped its story down to the bare minimum and replaced it with base-jumping, tanks, and exploding shotguns.

This is a perfect example of this departure from pensive, patient gameplay. Sure, the original GTA featured some outlandish stunts ala racing a helicopter in a boat, but it took the whole acceleration to this point in stride. We can see the steady progression of the game’s theatrics as Niko involves himself with more dangerous allies and foes. The game’s DLC releases show a departure from a meditative experience on crime and troubled pasts with a conflicted protagonist and on to jumping out of helicopters and banging models in the back rooms of nightclubs.

You’re probably thinking, how can this be bad? These titles still sell through the roof and even the reviewer himself admitted to loving these games which he also condemns. He also mentioned banging models, which is always awesome. This is true.

I never claimed that these series fail to deliver a solid and superbly enjoyable experience. Despite falling into the trap of exaggerated theatrics from time to time, games like Grand Theft Auto, Assassin’s Creed, Gears of War, and the Call of Duty franchise deliver thrilling, structured, incredible gaming moments. There is no questions these games weren’t throughly well-designed, planned and executed. But the progression of sequels and released content shows a gentle decline in an interest in making thought-provoking, creatively fresh games.

The issue here is the future. This outlandish insanity kicks ass now, sure, but if we pack every game to the brim with explosions and guns that shoot smaller guns which also explode, we will eventually find players bored with conventional shock tactics. If one game features a major city being decimated by some weapon of mass destruction, we’ll need to see a whole country bite the dust to sedate our bloodlust. Then planets and whole galaxies will need to be pulverized into atomic dust until a game won’t even blip on our radar unless it lets us shoot tactical nuclear warheads straight into God’s face.

Every game will need a No Russian level. And then seven. And then any thriller/action game will not be complete without at least letting the player mow down a body count of innocents equal to the population of Texas. Chainsaw guns? Child’s play. We need chainsaws with guns on them and then guns on those chainsaws. Hell, my bullets have chainsaws. In the near future, our game reviews will no longer have a number score for sound, design, story, or any of that nonsense. Instead, we’ll just have check boxes labeled TITS, SHIT BLOWS UP, and FUCK YEAH.

This is an exaggeration, of course, but done so to illustrate how bypassing the idea of complexity and innovativeness for shock value leads down a dangerous road for gaming. There’s always room for the genre of mindless games with the depth of a James Patterson novel, of course. Let’s not lose that. But there’s nothing shameful about making a game that constantly questions the player’s power. Games that steal your bad-ass-ness away to make you appreciate it. Games that show restraint by triggering an explosion but not showing it, making the enemies smart and clever, giving the protagonists and supporting character’s hang-ups and reservations about their actions, and making every checkpoint a struggle of creative problem solving and desperation.

It’s important we don’t let action/thriller games jump the shark. And if you think we’ve already passed that point a long time ago, then let’s not let action games jump the exploding robo-shark with the laser eyes that shoot whenever it bites.