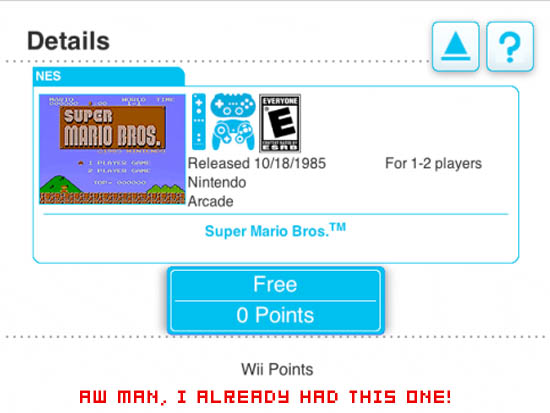 I’ve always said that gamers are the easiest people in the world to buy gifts for: we always have a massive list of “wants,” and so many games are made these days that we’ll never catch up. We’re coming around to that time of year again where we start to think about gift giving, and now it looks like Nintendo has found a way to make a buck from your kindness.

A new feature has just been unveiled that lets kind-hearted Wii-owning gamers send other Wii owners a game as a gift via the Wii shopping channel. You’ll be able to purchase and send the game to another online user, and when they accept the gift, the download of their new game begins.

“We think this will be a breakthrough in encouraging customers to spread news of fun games word of mouth,” Nintendo President Satoru Iwata said. “We also hope to spur more users to connect their Wiis to the Internet.”

Just think about how handy this will be if you forget one of your friend’s gifts this holiday.

Hopefully we’ll see this feature enabled before this holiday season rolls around. As of now, no launch date has been announced.