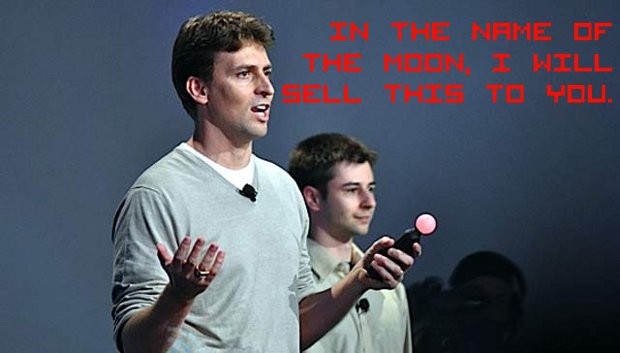 I get the feeling it may stay that way for another year. Several bandwagons seem to have developed over the past year as to what the “next big thing” in gaming is going to be, and to be honest, I’m sick of hearing about all of them. Not one of these “revolutionary” concepts hasn’t been done before, in some cases more than once, and all of them have been abandoned every time before living up to any real potential.

2010 is going to be yet another parade of gimmicks, and if anything amazing does come to pass, it’s not going to be due to any of these.

Sony is finally getting around to ripping off Nintendo’s Wii remote, and all I can think is, “Why?” For starters, every time I see footage of the Gem, or whatever they’re calling it, this comes immediately to mind:

Beyond that, how much decent use has waggle gotten on its home system in the first place? Certainly not enough to warrant duplication. Sure, it’s great in several of Nintendo’s first-party titles, but the bulk of those titles that do interesting things with the Wii’s motion control capabilities break it down into quaint little mini-games, such as the Wii Sports games and WarioWare. Several games eliminate the appeal of what motion control they have by making it completely optional; for instance, Mario Kart Wii’s steering wheel accessory is quickly tossed aside by veteran karters once they realize they can get more familiar and more accurate control by plugging in a GameCube controller.

Even in No More Heroes, a game in which you are running around and swinging a sword, which could have been tied into the waggle, opted to keep the attacks mapped to buttons rather than assigning them to controller movements. The only instances where motion control really comes into play involve jerking off your sword to recharge, flicking trash (or scorpions) into a can on your back, swinging at baseballs on a couple of missions, and using the (mostly unnecessary) wrestling moves on occasion. Nothing’s been done to raise motion control beyond the status of gimmick.

You’d think Sony would’ve picked up on this already, seeing as how the most compelling use of the SixAxis’ limited motion capability has involved jiggling a character’s breasts onscreen.

It’s not like this hasn’t been tried before with equally disastrous results. The NES had the U-Force, which was supposed to translate hand motions into gameplay, in such a fashion that it did not work with anything, ever, and the Power Glove, which had all of two games released for it before people went back to not caring. Sega’s Activator, an octagonal kick and punch sensing ring, fared just as poorly.

On a similar note to motion control, Microsoft’s trying to get everyone hard about Project Natal, their glorified Xbox Live Vision camera with some games that might have more effort put into them than TotemBall.

I can only see this lasting so long, and garnering a stack of similar games before Natal’s two quarters in the spotlight are up, and Microsoft moves on to more practical things. Gesture recognition has just as heinous a record as motion control, when it comes to not going anywhere and losing the support of its creators.

The most extensive foray into camera-based controls I can recall, prior to Natal, was the EyeToy on the PlayStation 2, which graced the black beast with all manner of flailing-based minigame compilations. The PlayStation 3 take on this nonsense, the PlayStation Eye, has proven just as underimplemented. Beyond the ability to slap a picture of your face on a character in a handful of games, you can use the Eye to play a card game with your console and an obscene amount of setup, or subject yourself to interaction with the stuff of nightmares:

Until someone finds a way to tie player video into console gaming in a compelling fashion, console cameras are just going to be the fastest way to show off your testicles to people on your friends list.

It seems like all the rage to purport a system can do almost/just as much as a PC, and to continue walking down that path by adding more and more PC-esque bells and whistles to home consoles. But do we really need it, and does anyone really care?

I’ll admit there are plenty of great ideas that have graced consoles this past year, and seem to be in the pipeline for 2010 as well. Enabling access to Netflix’s instant queue feature for devices that are constantly plugged into televisions already was a no-brainer, and… okay, Netflix on consoles was pretty much the only good idea I’ve seen on this front. Not that I’m dissing PS3’s Blu-ray capabilities or the ability to play DVDs on disc-based systems; those, however, come expected as part of the package (except on the Wii because Nintendo’s been lapped by Modern Day several times over now) and therefore do not apply.

Most every other neat thing you can do on a console that was inspired by PC functionality comes so crippled, it’s not worth the bother. Xbox’s Last.fm setup is kind of neat, but its lack of integration with the custom soundtrack function gives little incentive for anyone to turn to their 360 for tunes when they could just fire up their PC’s music player, or in many cases, stream music over their phone. Twitter’s and Facebook’s functionality are both horribly gimped in their forms on the 360 as well, and I can’t imagine the latter being much better on the PS3, especially if you have to pay for it with Sony’s forthcoming subscription plans.

And why is it that every console and its mother’s dog has a web browser on it? Access to keyboard hardware has made this slightly more viable on home consoles than on handhelds, which are just begging for eyestrain, but the PS3 is the only one of the trinity with any real mouse support. The Wii remote tries, but isn’t made for scrolling in any great fashion, and the Wii’s lower graphic capabilities make browsing on an HDTV that much more pointless.

Side applications are cute, and fun to play with when they come out, but for the most part have little staying power on things people are buying primarily on which to play games.

Are things really that bleak?

Not necessarily, but the gaming realm really needs to step it up if any of these approaches are going to stop being as forgettable as they currently are. Any gimmick can become a staple if it’s properly integrated and supported with what’s already there. This is especially in the case of new control technologies, where things aren’t going to go anywhere until they get some serious backing.

Give us compelling games that actually require using some of these new features, rather than just compiling tech demos. For example, while they basically turn the remote into a glorified lightguns, some great on-rails shooters have been released on the Wii, which wouldn’t have been possible with a more standard control scheme. Natal has a chance to provide incredible immersive experiences where the player’s movements translate into his or her exploration of a game’s world, but it’ll never happen (or be noticed if it does) should the concept be squandered on finding new and different ways for you to bounce balls around the screen. And have the stones, please, to stop giving people old options to fall back upon. When I can play Super Smash Bros Brawl with a Gamecube controller, why would I bother thinking of the Wii as anything more than a trumped-up Gamecube?

As for expanding a console’s range of uses, more options are great so long as they aren’t merely frivolous. I’ve already mentioned how Last.fm on 360 would be that much better if it could be used as an in-game soundtrack, perhaps with the control bar tucked in one of the system menus. Being able to post screencaps directly to Facebook or Twitter while playing a game, or even just posting some sort of update as to what I’m playing with minimal effort, would be a lot more interesting than just having my avatar stand next to my friends’ posts.

Web browsing on a console may be silly, but given the access to keyboards on all the consoles, why not scale things back, and perhaps make direct access available, respectively, to each system’s official forums? Not only would it give gamers a more direct way to share in a dialogue someplace they know they’d find others with similar interest, it would actually give those poor no-man’s-lands some traffic.

I guess what it comes down to is that I see the future, at least 2010, bringing little to nothing of interest if the industry doesn’t sit down and actually think about what some of these crazy ideas can do for their games, rather than thinking about what they can pass off as new and zany for a quick buck.