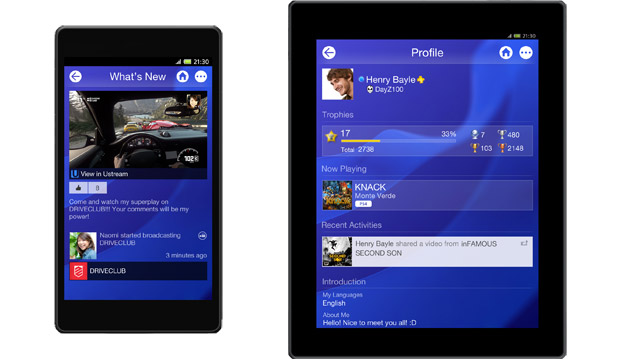 Initiate PS4 game downloads while away from home

We’ve heard a little about Sony’s upcoming PlayStation app before. The European PlayStation Blog has a bit more to go on and high-resolution screens of the free iOS and Android application which offer a clear look at the user interface. The big draw here is the ability to buy PS4 games online and have those download on your console straight away.

Other features include Trophy comparisons, viewing friends’ activity — even live-streamed PS4 games — sending text and voice messages, and second-screen functionality, in some cases.

Worldwide Studios president Shuhei Yoshida says that games like Battlefield will have their own dedicated app, and that’s fine. “But smaller developers can use PlayStation App to connect to PS4 and load an application, like drawing software for example, so that you don’t have to download and install a specific app on your smartphone. It’s open to all PS4 developers to use.”