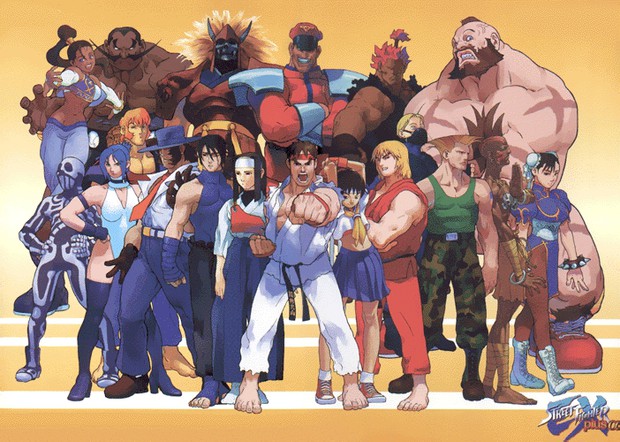 When I heard the premise of the most recent Monthly Musing, “The Forgotten,” it literally became both a dream and nightmare. A dream in that it was a topic I had extensive knowledge in. A nightmare because I had so many possibilities that I didn’t know where to start. There were so many deserving choices, so many games I had played that so many others had shoved aside. It was really, really, really hard to pick just one out of them all.

But what ended up coming to surface in my mind was a series of games from a franchise that are so forgotten, most people don’t even know they exist. Prompted by a list of rumored characters for the rumored Street Fighter IV Dash, I soon found myself with a series even I had forgotten about: the Street Fighter EX series. Yes, a series I guarantee most of you forgot about or didn’t even know existed until I just mentioned it this very second. And it’s honestly a shame that’s the case. Why’d it get forgotten?

Developed by Arika, a collective of former Capcom employees founded by Street Fighter II co-creator Akira Nishitani, EX has been forgotten in large part because the collective Street Fighter fanbase took one look at it and spit upon it. It was nothing what they had been accustomed to, and they hated how blocky the characters looked and how much slower the game played. Eventually, they would get what they want when Street Fighter III appeared on the scene, and EX was soon banished into the scrapheap. Capcom eventually got 3-D fighting right with Street Fighter IV, though there was for a while a vocal minority that pointed to EX as an example as to why it could never work.

The graphics bit, as it turns out, was a huge deal. The animations were well-done, but a bit slower than the normal frantic pace of Street Fighter II, the character models blocky, the backgrounds rather dull and void of much substance. It was everything the fanbase was not used to and didn’t stack up will with some of the series’ new-found rivals in the world of 3-D.

They were better, sure, but you have to remember that Namco and Sega had been doing this for some time, while this was Capcom and Arika’s first stab at a 3D fighter. It wasn’t going to be as good as two series that were now in their third iteration in 3D game play.

It also didn’t help that most of the characters in the game had the same set of basic moves. Still, their special moves and super attacks were pretty impressive for their time, so it wasn’t all bad, but because of those issues, the game pretty much went ignored while series fans went to the likes of Tekken, Virtua Fighter and the newly born Soulcalibur series for their 3D fighting needs. By the time the PS2 was becoming a rising force, the series had all but been forgotten and Capcom had shifted out of the Street Fighter business almost entirely, focusing their fighting game efforts on the numerous crossover titles that were making them boatloads in the arcades.

That, sadly, is a shame, because Street Fighter EX had one of the most diverse and most colorful casts in quite some time. Characters like Cracker Jack, Blair Dame, Doctrine Dark, Pullum Purna, Hokuto and Skullomania dotted the battlefield alongside Zangief, Chun-Li, Ryu and Sakura. There are some great designs and great background stories among this bunch, particularly Dark, Pullum and Skullsy, and if you haven’t guessed by now, the fact that not one of them is going to be in Street Fighter IV Dash is indeed what sparked this whole thing to begin with. It’s a series so forgotten, even Capcom itself doesn’t remember it’s existence … or is for some reason trying to forget it.

The game itself, which I have played (yes, I play Street Fighter games that don’t have Cammy in them … what a shock), isn’t too awful once you look past the whole graphics thing. Thankfully, I can do that pretty easily given the game’s age, and it’s not as horrifyingly bad as some of my fellow Street Fighter vets make it out to be. It can get a bit boring, yes, but the unique characters that Capcom and Arika threw into this game, along with some of the great special moves like Skullomania’s unblockable and silly Skullo Dream, are worth the price of admission alone. Plus EX boss Garuda is easily better than Seth and Gill combined. Two words: nipple spikes.

Street Fighter EX may not have been the answer Capcom was looking for quite yet. It may not have been what the fans truly wanted. But for what it’s worth, EX was a pretty fun game that should be remembered for it’s cast of characters that outshone those of Street Fighter III without having to be as bizarre as Q, Oro, Twelve and the like. But perhaps because it was no more than average in a series that prides itself with perfection, Street Fighter EX will stay buried, the skeleton in the closet that the series is irrationally afraid to embrace. And hey, it’s better than the real black sheep of the family, Street Fighter: The Movie. Ugh, just thinking about that sends shivers down my spine …