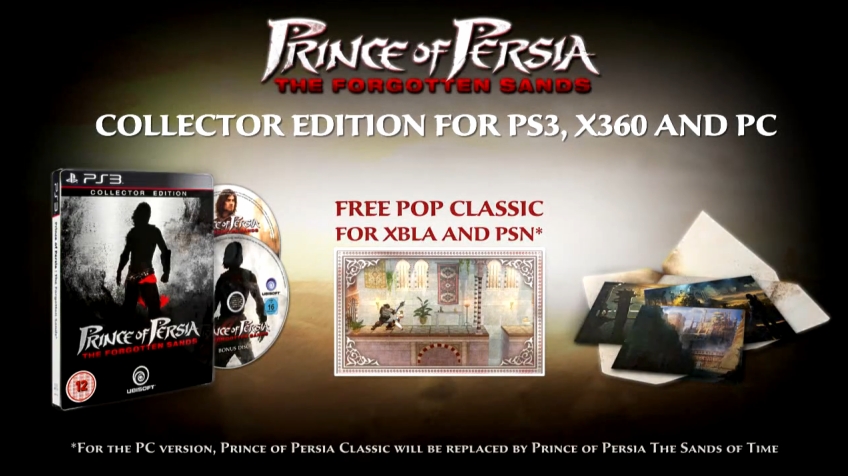 Cool, something that’s not a joke! Ubisoft has released the latest trailer for the upcoming Prince of Persia: The Forgotten Sands today. Beyond some new gameplay, it also acts as the reveal for the game’s collector’s edition… because I don’t think Ubisoft is allowed to release a game without one.

Available for Xbox 360, PlayStation 3, and PC, the collector’s edition appears to come with a number of nice bonuses. An extra disc, some art work, and — here’s the best part — a free game! PS3 and Xbox 360 owners will get a free copy of Prince of Persia Classic, the remake of the original released on Xbox LIVE and PlayStation Network in 2007 and 2008 respectively. PC owners, on the other hand, make out like bandits — they get a free, full copy of Prince of Persia: The Sands of Time.

No word on pricing, but given how these things go, you’re looking at anywhere between $10 to $20 extra for additional goodies. Worth it? That’s your call. I already own Classic and The Sands of Time, so I’ll probably take a pass. But given that The Forgotten Sands supposedly takes a turn back towards The Sands of Time formula, I’ll be picking up the game this May, bonuses or not.

[Update: Quick clarification from Ubisoft on this:

“The Collector’s Edition announced in Europe refers to EMEA territories. In the US, we will be making a similar announcement in the near future,” a rep told us today.