Zelda II turned 30 years old in Japan a few weeks ago. It was a quiet anniversary, one fitting the black sheep of a prestigious family.

Just last year, writers were tripping over themselves to mark the 30th anniversary of the release of the original Zelda. I suppose that’s fair, since the origin of such a storied series deserves special recognition. But no such trumpets have been blown for its sequel. A few scattered stories, the odd mention or nod. The reserved, distant acknowledgement of a relative most would prefer to forget.

Zelda II was always the aberration of the series. The weird break from format that would always mark the title with an asterisk. The bizarre little entry that decided to walk a different path from its beloved older sibling, and would serve as a cautionary tale to all the other younger siblings, cousins, and grandchildren down its line.

It’s also (probably) my very favorite game of all time. 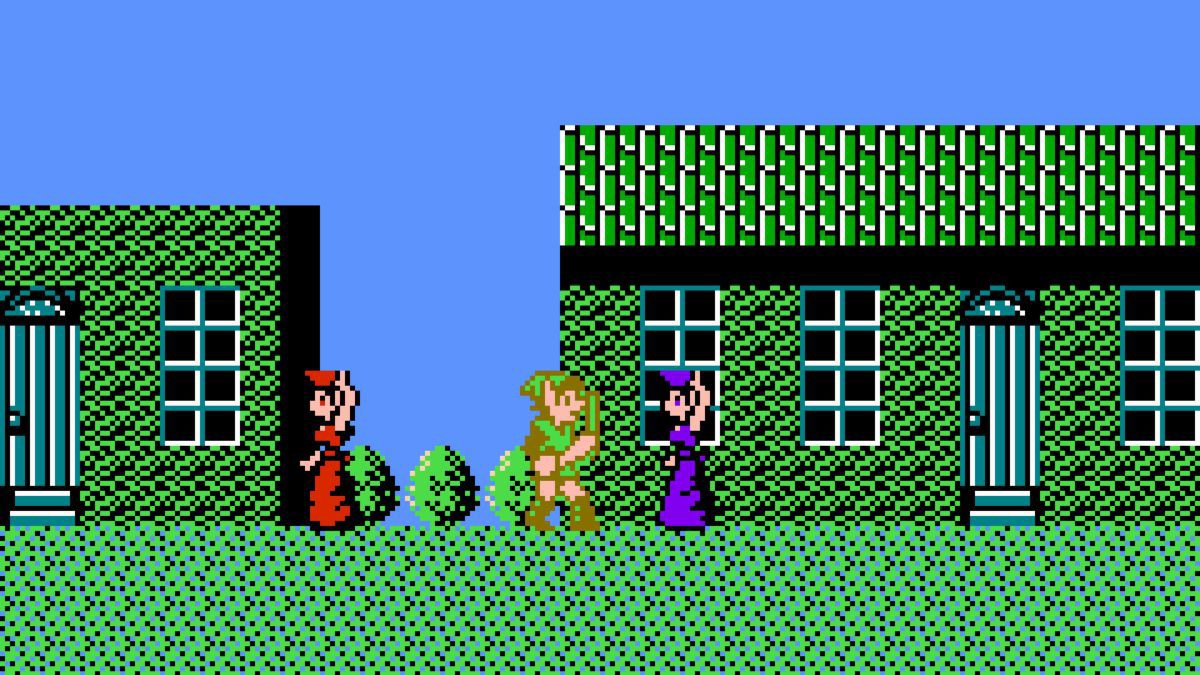 I’ve written about Zelda II a few times a before, back in my C-blogging days, so longtime readers might have heard this sermon before, but bear with me. This is a special anniversary, and I’m not going to let it pass without the reverence it deserves.

Zelda II twists and worms its way through my entire gaming life. It was the first game I ever snuck downstairs after bedtime to play in the dark, the sound hushed to a whisper. It was the first game I ever purchased with my own money. I would come back to Zelda II after the Genesis came out, after the SNES came out, after the PlayStation 2 and the Xbox 360. It’s a game I keep coming back to.

Zelda II is the reason I dressed up as Link twice on non-consecutive Halloweens. It’s why I bought every scrap of Zelda merchandise I ever came across, no matter how flimsy or cheap it was. It’s why on my own 30th birthday, my brother bought me Hyrule Historia and I placed it on the coffee table with pride.

Zelda II is why I’m a Zelda fan (and it might be why I’m so passionate about gaming in the first place). But, having Zelda II at the core of your Zelda fandom creates a unique tension. If the game you love the most from a series is the one that is nothing like anything else in the series, are you really a fan? Have I spent the last thirty years loving a series of more than a dozen games based on my singular devotion to one particular title? 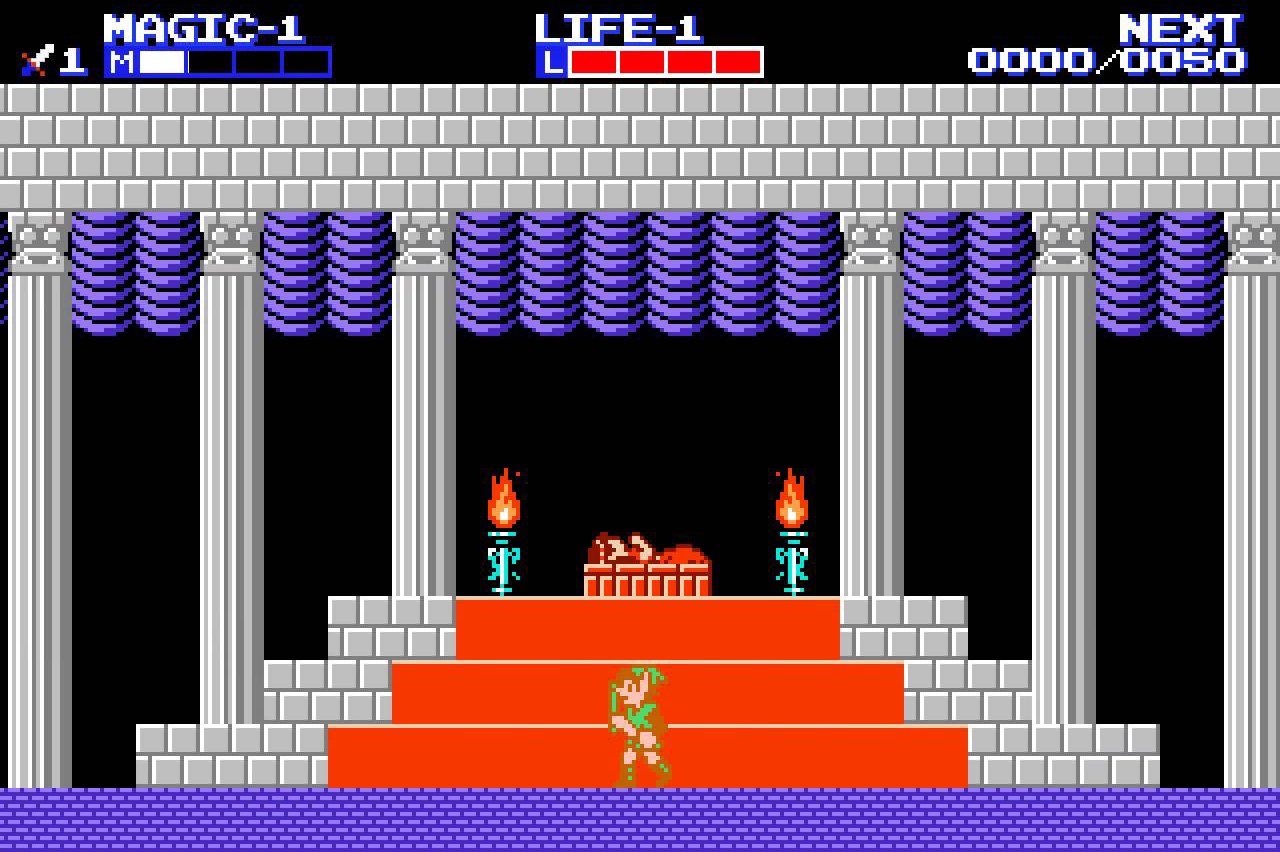 The players in Zelda II are the same as the original, but the stakes are different. This isn’t a rescue mission for one, Zelda isn’t kidnapped. You start the game right by her side, stuck in an endless slumber like Snow White. Ganon is dead, yet his presence lingers. He works his magic from beyond the grave, demanding his followers to bring him the very blood of Link’s body so he can be resurrected. It’s a darker story told through a tiny rectangle of an instruction manual, short, economic blocks of text, and a whole lot of imagination.

You can find the entire landmass of the original Zelda hidden in Zelda II’s expansive world map. Just below the jagged rocks of Death Mountain, if you squint, you can see where the foot of the mountain meets the top most portion of the original map, the lands Link traveled to become an adventurer. It looks small in hindsight. 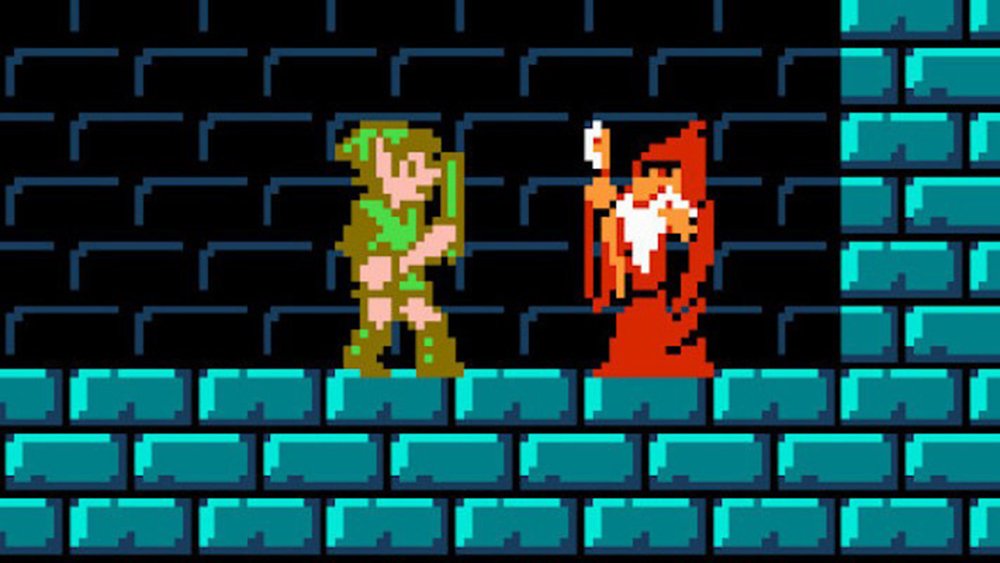 Killing Moblins and Slimes grants Link with experience points you can use to boost the stat of your choice. It’s a first and a last for the series. Link always grows in power and ability in every Zelda game, but always through new items and more masterful swords — Zelda II is the only game where you can choose how you develop as a warrior.

You seek the advice of sages and great warriors to learn new spells and battle techniques. For some reason, all of them reside in dark, dank cellars beneath their homes. But then you wander the town and a passing stranger cryptically warns you “The eyes of Ganon are everywhere” before turning into a bat. I suppose a little paranoia is justified.

You gain a spell called “Shield” in the first town. The old man’s face is hidden with by a wispy beard as he tells you “this will help in Parapa Desert.” Of course, Link is already carrying a metal shield, so what could this spell do? Is it a force field? A reflecting curse?

You cast it, and Link’s tunic turns red. You can almost picture his tiny shoulders shrugging, “I guess that’s magic for you.”

Hell, even the way you cast spells is maverick. Can you even think of another game that used the select button for anything other than menu navigation? Zelda II was an iconoclast in every way.

The original Zelda was a challenging game. Its sequel is far worse. Blatantly unfair. Cruelly arbitrary. Progress in the game demands the player wander through invisible paths, chart their way through looping death mazes, and psychically predict the presence of invisible pitfalls. Even in an era where a certain segment of the gaming population celebrates masocore games like Dark Souls, Zelda II’s difficulty stands apart — it’s simply too mean to seem fair. We’ll never see another Zelda game like it.

Referring to the Nintendo Power Atlas strategy guide didn’t feel like cheating. It felt like the bare minimum to survive. In some ways, it feels like Zelda II was made to sell strategy guides. Maybe it was. Maybe my favorite game is based on a crass commercial trick. Sometimes beauty and splendor come from the most unlikely sources. 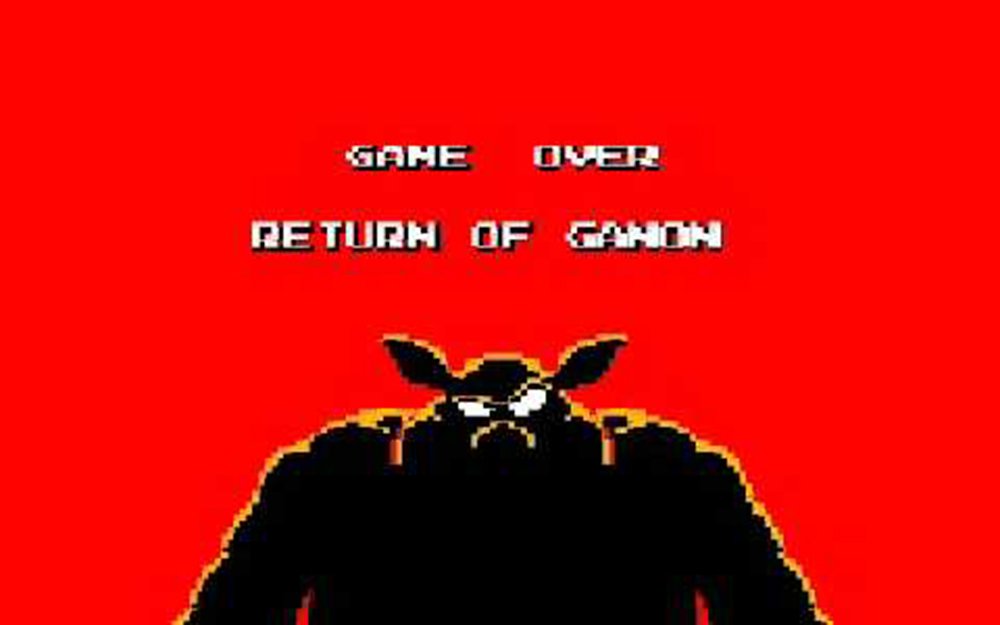 When Link dies, it’s jarring. The screen flashes colors you didn’t know the NES was capable of displaying. Link’s silhouette stands stark and lonely in the middle of the screen — mortality crystallized as dramatically as 8-bit technology could ever hope.

If you’re unfortunate and that’s your last life, you get to hear a synthesized laugh bleat out over a blood-red screen dominated by the hulking black frame of Gannon. The continue screen reminds you to hold reset as your turn the console off to protect against data loss — the game won’t stop threatening you.

Bosses in Zelda have always been wacky, but what is the theme in Zelda II? A mace-wielding warrior with the head of a horse lurks at the bottom of an austere castle. It all seems vaguely Grecian. An island temple only accessible by walking across water like divinity itself is defended by a fat dude with a ball and chain. What’s that about? A Native American Thunderbird hovers over the throne where you’d expect to find Ganon. What kind of fight has Link picked exactly? 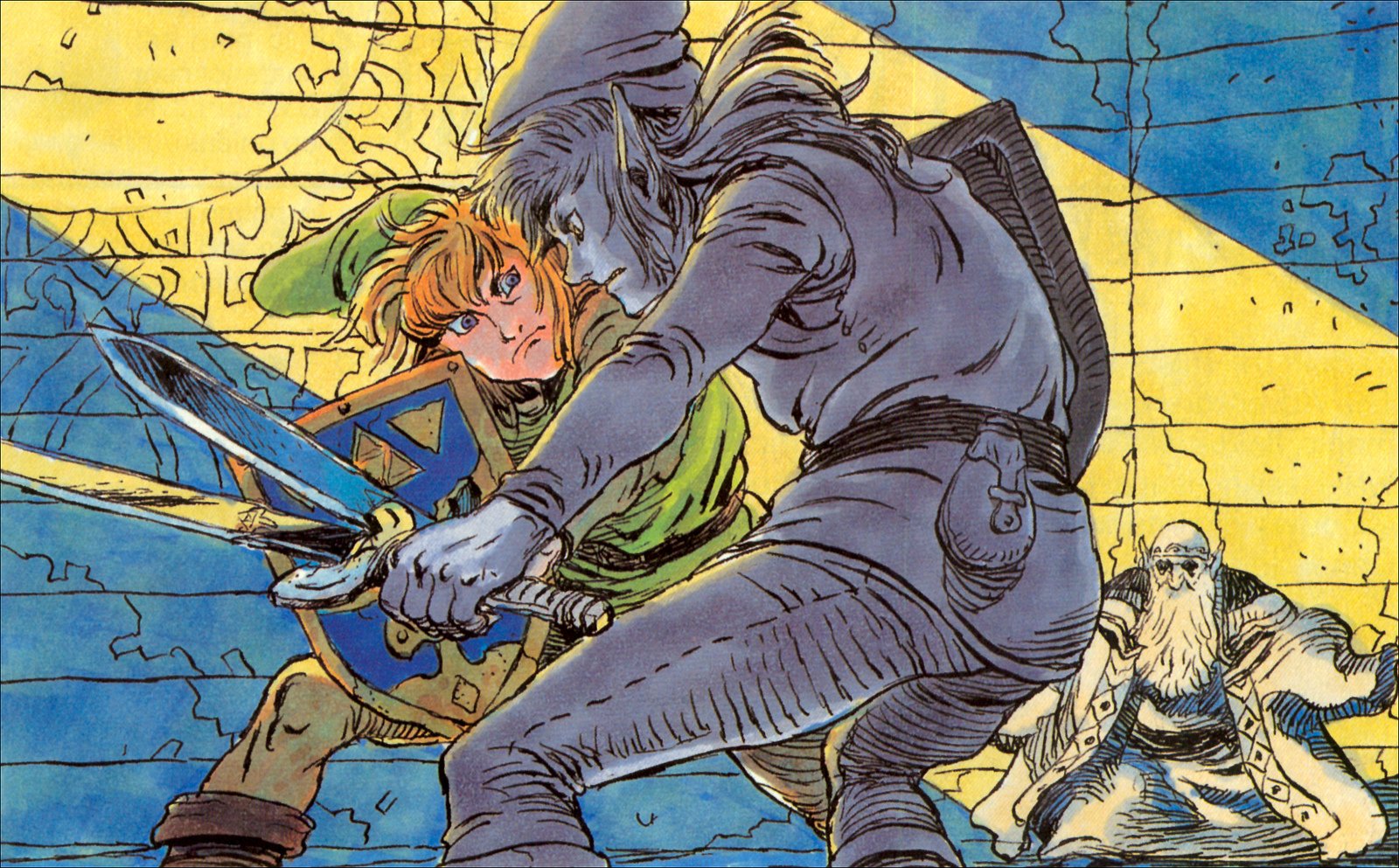 The last fight in Zelda II is against Link’s inner-demons personified as a shadow of himself. It might be the single greatest moment in NES history. It’s also the first appearance of Shadow Link, the only durable piece of Zelda II’s legacy.

While later games would ditch the side-scrolling, the brutal difficulty, the library of spells, and everything else aberrant and beautiful about Zelda II, it would keep the final boss. Shadow Link would appear again and again in future games. But how many actually made it through the final palace to meet him face-to-face in his first appearance?

But that’s the end of the adventure. It’s much more interesting to talk about the beginning. That gorgeous 8-bit work of art of a title screen. The slow pan from a night’s sky down to a sword set in stone. The theme musical that alternates between adventurous and morose. Even now, decades later, that theme stirs something wistful, hopeful, and sad in my heart.

Among its contemporaries, only Metroid matches Zelda II’s dark sense of mood. I can’t think of any other first-party Nintendo games that use so much black. Black title screens, black menus, black stages. Darkness looms over both games in a way I can’t imagine Nintendo giving its blessing to now. Hyrule has been a colorful world for decades, filled with plump little chickens to bully and goofy townsfolk with cartoon eyebrows. Metroid is still dark, but dark in the way a modern sci-fi movie is dark, all nebulas and gases, greens, purples, and blues.

If Zelda II is the black sheep of the franchise, it wore the cloak proudly. It wore it with panache. 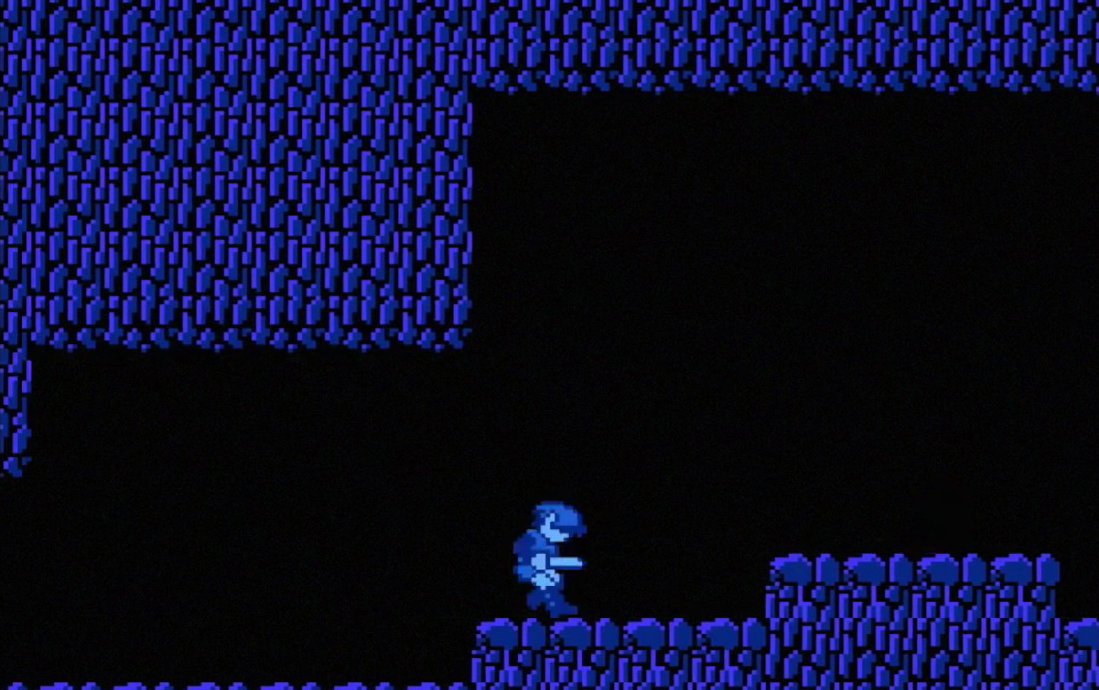 Did you know Zelda II was the fifth-best-selling title on the Nintendo? More than Metroid, Castlevania, or Punch-Out? Far more than Dragon Warrior, a game that was literally given to magazine subscribers for free.

In many ways, Zelda II’s sidescrolling stages laid the groundwork for the metroidvanias to come. You explore a mountain path only to find a ledge that is inaccessible until you gain the “Jump” spell. But to learn that spell, you’ll need a trophy to convince a sage to teach it to you. That trophy is hidden at the end of a darkened cave you need a candle to safely navigate. The candle is in the bottom of the first temple.

You can poke and prod at Zelda II’s map, explore its strange caverns and temples. If you’re clever or extremely skilled, you can even sequence break certain parts. But in the end, it’s all about exploration and collecting the items you need to progress. Does any of this sound familiar?

All Zelda II might have left it in its own series was a shadow. But, it planted the seeds for an entire genre to follow. That’s a legacy worth celebrating.