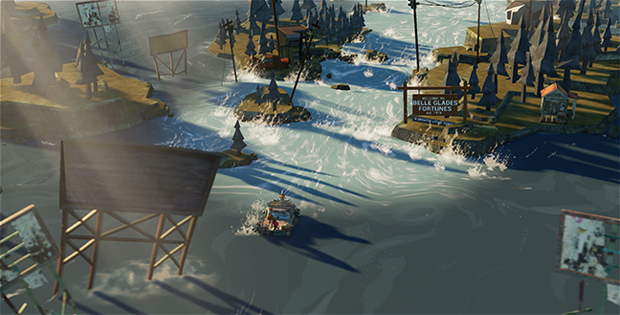 What a lovely combination. You know The Oregon Trail, but do you know Toobin‘? It’s a late-1980s arcade game about inner tubing down a river, and it was awesome (still is!). There’s also a hint of Beasts of the Southern Wild here, which delights me to no end. You’ll want to settle in and watch this pitch video, as it does a good job of conveying the mood of The Flame in the Flood.

This is a game about drifting down a procedurally-generated river, but it’s fleshed out with survival elements, looting, and crafting. Permadeath is in too, although “your journey has an end.”

The team at The Molasses Flood — cool studio name, by the way — is made up of former Irrational, Harmonix, and Bungie developers. Lots of BioShock experience, in particular. With $150,000 in funding on Kickstarter, they’ll be able to make The Flame in the Flood for PC and Mac.

I’d like to see more footage, but for now, digging the atypical game premise.

The Flame in the Flood [Kickstarter]