In no particular order

With regard to games shown at last weekend’s PlayStation Experience, Sony had two noticeable strengths: its first-party mega-titles and the projects of its ever-growing stable of independent developers. While PlayStation fans finally got the chance to go hands-on with the publisher’s biggest names like The Order: 1886 and Bloodborne, it was the indies along the length of the entire side wall where the true gems could be found.

In that sense, PlayStation Experience stepped right in line with all the year’s other conventions; in relatively small crowds, players got to move from station to station, and fell in love with new games that they knew little-to-nothing about. Checking out the giant booths is all fine and fun, but ask anyone and they’ll tell you that talking to passionate indie devs about their games and playing it at their small, humbling exhibits is the glue that holds community shows together.

These were Destructoid’s favorite indie games at PlayStation Experience.

It’s been long known that the closest thing that Microsoft had to a dedicated indie developer was Ska Studios. That’s why it was such a jarring announcement when the team of James and Michelle Juett Silva announced that their next game, Salt and Sanctuary, would be a PlayStation 4 and Vita exclusive. After getting some time with the game, it’s easy to say that it’s poised to be a fine introduction to those that have stuck solely by Sony’s side all these years.

Spending any time with Salt and Sanctuary will lead anyone to draw the obvious parallel between it and the Souls games. That’s not inaccurate in any way. Salt and Sanctuary is Ska’s love letter of sorts to the From Software titles. Salt functionally acts like souls. Staying light and nimbly rolling out of the way of attacks is an advised strategy for success. Oh yeah, and it can be just as unforgiving as Souls if you don’t take time to learn the mechanics and patterns of enemies.

But that’s not to say it’s a clone of sorts. There’s more that Salt and Sanctuary does to carve out its own identity. We only saw the first boss, so there’s sure to be plenty of content to discover. However, the 2D direction sticks out, and the art style is so wonderfully Ska. Fortunately, Ska has a personal goal of shooting for a 2015 release, so hopefully PlayStation owners won’t have to wait long to see what they’ve been missing.

Few games in recent memory have had that special platforming prowess that N+ did. The small black ninja and his floaty leaps and wall-jumping abilities were simply maddening when it came to just trying to collect some gold and reach the exit. You see, absolutely every danger in N+ proved to be immediately fatal. Dying over and over wasn’t uncommon for most players. But all that made successful runs so much more special.

N++ is that again, more or less. Except this time, it’s as beefed up as it can possibly be. Developer Metanet Software says that this will be the last N+ title it makes, so it’s leaving nothing on the table. One thousand levels, cooperative play, competitive multiplayer races and the possible inclusion of deathmatch — anything that works well will be added. That’s all fine because soaring across levels and dodging everything in sight has gotten no less enjoyable.

A cursory glance at Tom Happ’s Axiom Verge, and it’s immediately clear where he drew inspiration from. The retro, 16-bit action evokes memories of Metroid and Contra. It’s the type of game that looks as if it’s made in the spirit of some of the developer’s most beloved titles.

And, in that same vein, Axiom Verge does all it can to not hold your hand — again, just like those games of old. Some of the obstacles can appear so obtuse, but are so rewarding once you finally figure them out. A wonderful melding of action, exploration, and puzzle-solving, Axiom Verge looks to hit that perfect harmony we fondly remember titles of several generations ago routinely hitting. 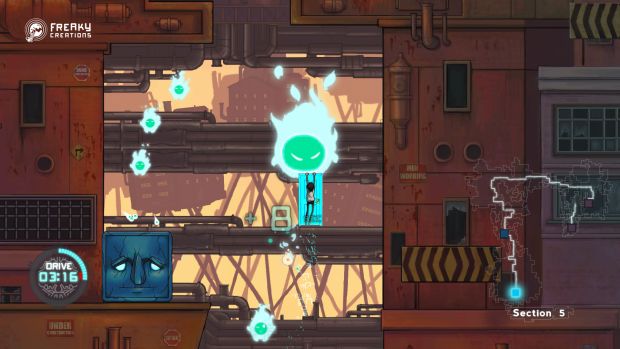 To Leave is another wonderful platformer, but this one’s more Flappy Bird than Super Meat Boy. Playing as a boy named Harm, you’re tasked with the ultimate goal of leaving. That title’s brazenly on-the-nose.

Clutching a magic flying door (we didn’t say it made sense), Harm navigates levels by tapping a button to elevate, and not tapping it to sink. The challenge lies within the fact that touching any wall leads to immediate death. There are also floating objects to collect that add time to the clock that’s constantly winding down. Letting time expire results in having to start the level over again.

That all sounds basic enough, but it raised an eyebrow when the developers said that some levels eventually take about an hour to clear. Add in the fact that puzzles are introduced and used often, and there’s definitely quite the challenge in To Leave — one that we didn’t want to put down, much to the dismay of those in line behind us.

Maybe the most thrilling game we played at PlayStation Experience came when we didn’t even have a controller in hand. Project Morpheus-enabled Keep Talking and Nobody Explodes was a riveting five minutes of bomb defusal, and all we had in front of us was a binder full of paper and a pencil in our hand.

Paired up with someone wearing the virtual reality set, we had a list of constraints in front of us explaining how this bomb could be disarmed. We obviously couldn’t see if there was a yellow wire, or what symbols were on the activation code pad, so we just had to do our best to repurpose the constraints into questions and commands for the defuser.

“How many yellow wires are there?” “Describe the four symbols on the pad.” “Okay, push them in this order…” It wasn’t easy going, but the three-step process was eventually achieved. Those pulse-pounding few minutes were met with a sigh of relief when our partner said “awesome, we did it.” And, we finished with a scant eight seconds left before everybody exploded. Lucky thing we kept talking.