Defiance, Trion Worlds’s post-apocalyptic MMO shooter, came out a couple of days ago, and I’ve been courting it. We’ve gone on a few dates, but we’re still getting to know each other, so it will likely be a couple of weeks until I’m ready to give my full impressions. The Syfy TV show based on the game airs on April 15, and the game will apparently have an effect on the series, so I’d at least like to watch an episode of that first.

In the mean time, allow me to share with you my first foray into this ravaged future Earth, where aliens and humans live side-by-side, but don’t exactly co-exist. There’s still a lot of junk I probably don’t know or haven’t figured out yet, so bear with me. 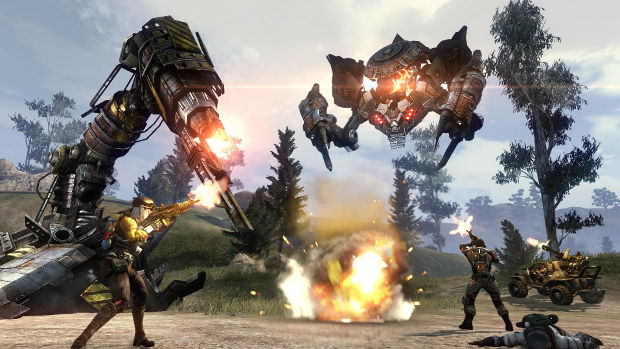 An MMO shooter can be a lot of different things. PlanetSide 2, for instance, eschewed most of what we have come to expect from an MMO, instead dropping players into a persistent battle between three evenly matched factions. It’s an online war, with only the hint of a traditional massively multiplayer framework.

Defiance is on the opposite end of the spectrum, and comes laden with quests, gear drops, and a proper narrative. It’s unmistakably an MMO, but one with guns and aiming instead of hotbar mashing.

Making my first character was, I must admit, a wee bit confusing. I went into the game fairly blind, and very little is explained from the get-go. There was a vague cutscene lacking any context and then I was presented with the character creation screen.

What’s the difference between the humans and aliens? Not very much. Everything seems to be purely aesthetic, and, frankly, the alien design makes Star Trek races look imaginative. It took me more than a moment to realize that there were additional customization options hidden at the top of the screen — the first of many poor UI design choices — but once I spotted them, I crafted my hairy biker alien. 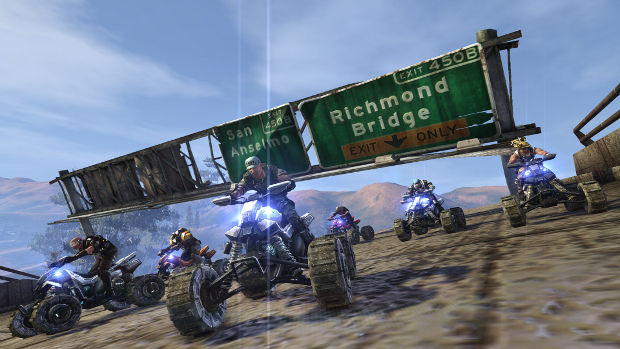 I found it a bit odd that after yet another cutscene and a tutorial section, I still didn’t really know what was going on. I knew how to shoot stuff, and I knew how to use my special ability, but beyond that, I was completely lost. I don’t need a game to hold my hand, but Defiance is pretty stubborn when it comes to doling out information or giving any context to the adventure.

After rummaging about in menus, I’ve been able to learn a lot of what I need to know, but it’s all unnecessarily obfuscated. Much of this comes from the haphazard UI, which seems badly implemented on the PC version. It does not really appear to be designed for the platform.

Speaking of things not designed for PCs, don’t expect any graphics settings. You can scale the bloom and add motion blur, but beyond that you can’t do much more. There are four graphical presets, including the hilariously pointless “custom” preset. A custom preset only works if there are advanced options, but they don’t exist.

Defiance was meant to have been built from the ground up on all three platforms, PC, PS3, and Xbox 360, but it’s hard not to think of it as a console port.

So, my very first impressions were not particularly positive. But I soldiered on, and I’m glad I did, because I started to enjoy myself. 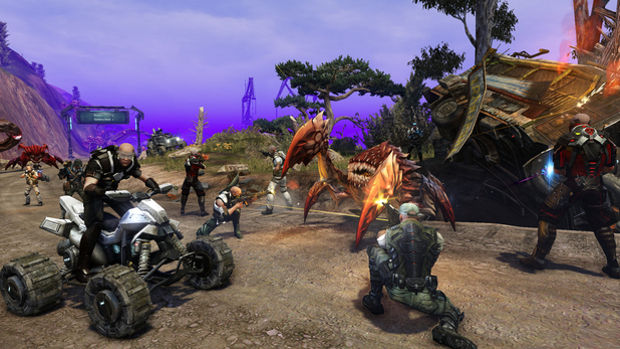 I like the classless system, for one. Having multiple loadouts means I can switch weapons and my primary power and secondary perk on the fly, completely changing my role in combat. I can go from a sniper with a back-up pistol who uses the high ground to his advantage one minute, to a close quarters shotgun-wielding maniac who gets an advantage against charging enemies the next.

One of the things I absolutely loathe about your average MMO is the lazy quest hub. I find running into an area and gather all the quests I can before running out again and completing them to be incredibly unsatisfying. It feels like a routine. Although missions in Defiance can be seen on the map, they are spread out, giving you a reason to explore a little — which is even more fun once you get your first vehicle — and giving greater purpose to some of the areas.

While not particularly interesting, missions have yet to devolve into simple kill or fetch quests. There’s a logical reason for every mission, and they tend to involve me assaulting areas until the military can come in and take them over, or assisting a character who joins me as a temporary companion.

While exploring the mutated landscape, events crop up every now and again which require some haste and lend a sense of agency to the proceedings. I sometimes found allies being assaulted my mutants dropping out of helicopter, and quickly leaped in to defend them, or I’d come across medical personnel surrounded by mutant troop carriers and need to rescue them. 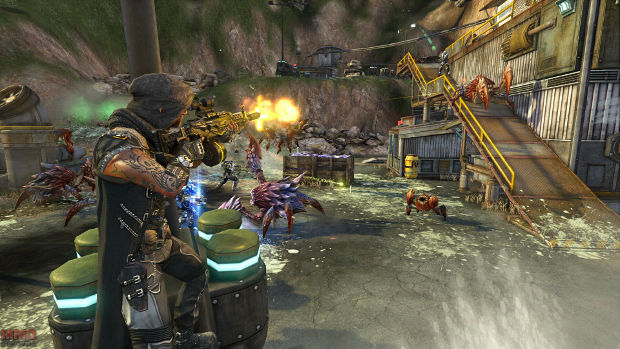 Larger events like meteor showers that deposit menacing chunks of space rock filled with bugs that wouldn’t be out of place Starship Troopers occasionally appear, and are easy to find on the map — they also show up on the HUD, which is pretty convenient. I’m yet to figure out what their beef is with Earth, but damn are those beasties tenacious.

The rocks form a circle around a massive area, and must be destroyed within a time limit, with the event eventually climaxing in a battle against a particularly dangerous elite insect. I’ve only participated in one such big event so far, and I confess that I had no clue what the hell I was doing, but it was certainly fun to join a hundred other players in a bug extermination party.

I’m yet to dabble with the matchmaking feature, and I’m finding that Defiance doesn’t really put the social aspects at the forefront of the experience in the way one might expect from an MMO. I’ve teamed up with fellow players during some of the random events, but it’s always temporary and utterly disorganized. I intend to put some more effort into getting into the group content soon.

Keep an eye out for my full impressions after the first episode of the TV show airs on the 15th.