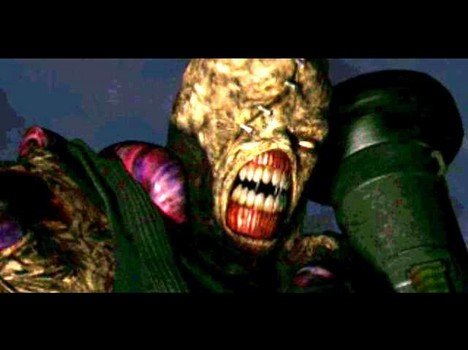 [Editor’s note: aborto thefetus talks about one of the best villains ever for his Monthly Musing piece. — CTZ]

I love Survival Horror games. I’m one of those types of people who find an unnatural joy in being scared when it comes to playing videogames, which is what made me really excited about this Monthly Musing topic. And unlike all the Monthly Musing topics before, I didn’t need to sit down and think what to write about, as I knew immediately what I needed to write. He’s a character that I have long since considered the scariest and most badass videogame character of all time: Nemesis of Resident Evil 3 fame.

Before I go any farther, let me just say that the Resident Evil series is my favorite videogame series. Other then Survivor and Dead Aim, I have played every RE title ever made. My top 10 favorite games of all time include Resident Evil 2, 3 and 4.

That being said, I had played the first two RE’s numerous times before 3 came out, so I had come to expect certain things of Raccoon Cities denizens. The truly terrifying thing about Nemesis is that he didn’t follow any of my expectations for an enemy in a RE game.

When he first jumped out in front of the Raccoon City Police Department, I followed my usual routine for a big enemy in RE — I ran. With the limited ammo I had and considering I didn’t have any big weapons yet, I figured confronting him now was a really stupid idea. And initially he did exactly what I expected him too. The minute I went through the front door of the police department, he left me alone. By the second time I encountered him inside the police department, I figured I could do the same thing and run to a door to another room where he would leave me alone. I promptly did that and I assumed I was safe.

That was until I heard the door open and slam shut behind me.

I remember that first split second before hearing that door slam and then seeing him onscreen. That initial thought of “Oh crap, did he just follow me into this room” and then seeing him and then thinking “OH SHIT!” That sense of fear at realizing that this guy just followed me was heightened by the fact that he ran at me. And I don’t mean the lunge a persistent zombie makes or the leap a Hunter makes, I mean a full on sprint. The minute I saw that I ran to the next door and entered the next room. And once again that feeling of relief washed over me.

That is until I heard the door slam shut again.

This happened two or three more times until I just kept running and running from one load screen to the other until I had run through ten load screens and realized that he wasn’t following me anymore. 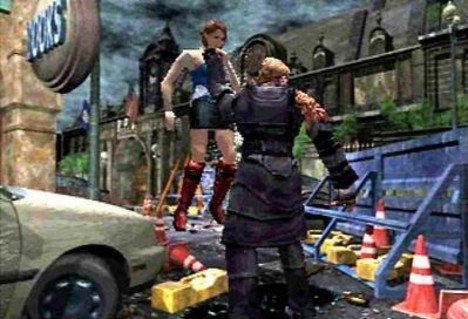 That was part of the terror of the Nemesis. He wasn’t like the dimwitted monsters in previous games that couldn’t get through doors or up stairs. He chased after you and no bullets or weapons could stop him. Unlike the Tyrant and the William Burkin monster, bullets didn’t slow him down or damage him. No matter what weapon you used on him, he didn’t stop coming after you, he wouldn’t even slow down. Then there’s the fact that he himself also used a weapon. The only thing scarier then a monster chasing after you is a monster chasing after you carrying a rocket launcher.

After the first few hours of the game, I had become incredibly paranoid. I always had this feeling that I was being watched, that he could pop out at any time. A sense of paranoia that increased when I was low on ammo and herbs. And hearing that rough voice moan “SSSTTTTAAAARRRRRSSSS” after an hour of stewing in my own paranoia is one of the single most terrifying experiences in videogames.

And this really only makes up the first half of the game. He appears less frequently in the second half, but he makes up for it because after all the damage he has sustained his body begins to evolve to the point that his whole right arm is covered in a wriggling mass of tentacles which makes him even more dangerous and frightening than before.

But by far the most memorable part was the boss battle against him when you are locked in an Umbrella Lab’s garbage disposal with him. Not only do you have to beat him, but you have to do so before you, him, and the piles of refuse around you are dumped into a pile of industrial acid. Not only that, but the only effective way to kill him is by shooting pipes around the area when he is close to them so acid spews out onto him. This proved to be incredibly difficult, so I had died several times in the process of trying to beat this boss battle. Finally after several tries, I finally shoot a pipe and acid spewed out and it ate through his neck causing his head to fall off. I immediately felt a sense of relief. I finally beat the bastard! I finally killed him! And then that was when his headless body lunged at me and with a single swipe of his tentacle arm, eviscerated me.

I don’t think I have ever screamed so hard in my life.

I had assumed that the loss of his head meant I won. That he was dead. That wasn’t the case. Even without a head he came after me. That was so unexpected that it scared the crap out of me when he attacked me and proved to me that I hadn’t won yet. It was so effective at scaring me that even after seeing his headless and armless body ravaged by the acid, my bullets being dumped into that pool of acid didn’t satisfy me. I still thought he would come back for me.

And he did. Even after losing his head and both his arms and being dropped into a tub of acid, he still came back. But now he was changed to the point that he was barely recognizable. After being notified that a missile was approaching Raccoon City and running through the lab to the helipad and hopefully to safety, a ventilation shaft breaks open and a mass of tentacles and spikes fell out. Fortunately, this happens when you are in a storage room containing a large industrial laser, which after being allowed awhile to warm up blows a hole straight through him. After this boss battle, I went over to the elevator going up to the helipad and as I press the button to the elevator that mass starts to move again. 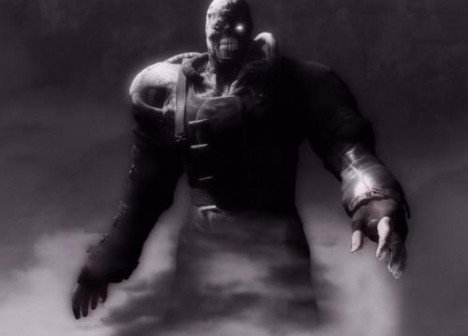 Throughout the entire game guns, grenades, acid, lasers, fire, and rockets didn’t kill him. In the end, the only thing that was able to kill him was the missile that annihilated Raccoon City. And it was this and the Nemesis’ unstoppable pursuit to kill me that makes the Nemesis one of the most terrifying antagonists in videogames and worthy of this month’s Musings.