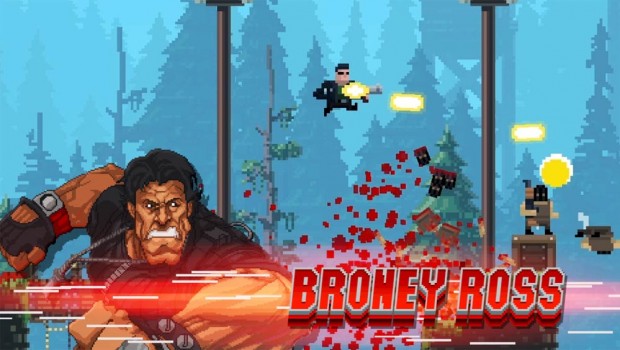 Word on the street is Stallone is a fan

A lot of people are annoyed with the idea of product placement in games. The inclusion of free Mercedes Benz DLC in Mario Kart 8, and to a lesser extent, the Expendables 3/Broforce collaboration, have some screaming “sell out”. Personally, I think they’re both great. A in-game ad or cross promotion can be unoffensive way to help a game to turn a profit. Anything that helps games to turn a profit without them being forced to pass the cost on to the consumer, or chase the favor of the lowest common denominator, is a good thing.

The key is to make sure that the thing being promoted and the game are a good fit for each other. Like the Mario Kart 8 Benz DLC. It’s a spot on parody of the concept of luxury cars as giant, over priced toys for grown ups. That’s what makes it work. As for The Expendabros, it’s such a perfect fit that it denies need for explanation.

That said, lets explain it anyway. When asked about how The Expendabros came to be, Devolver’s Nigel Lowrie told us “Lionsgate Films caught wind of Broforce and loved it so they reached out to Free Lives and Devolver Digital to see if we were interested in some sort of cross promotion. After some discussion we came up with the idea to parody The Expendables 3 a bit like Broforce has done with classic 80s and 90s action films. Lionsgate was able to get buy off from the stars of The Expendables series and Free Lives spent two months working to create some Expendabros on the side. The environments, weapons, enemies, etc. that are in Expendabros will all be used in Broforce during its ongoing development but the character art is obviously unique to the crossover game.”

But how did names like Sylvester Stallone, Terry Crews, and Dolph Lungren feel about being Bro-ified? According to Lowrie “The actors did get to sign off on stuff and word on the street is that Sylvester Stallone is a fan of the project and even asked for some original art from the Free Lives team.”

I’m just surprised Stallone is cool with being called a Brony. Maybe he’s a fan of more than just Broforce…