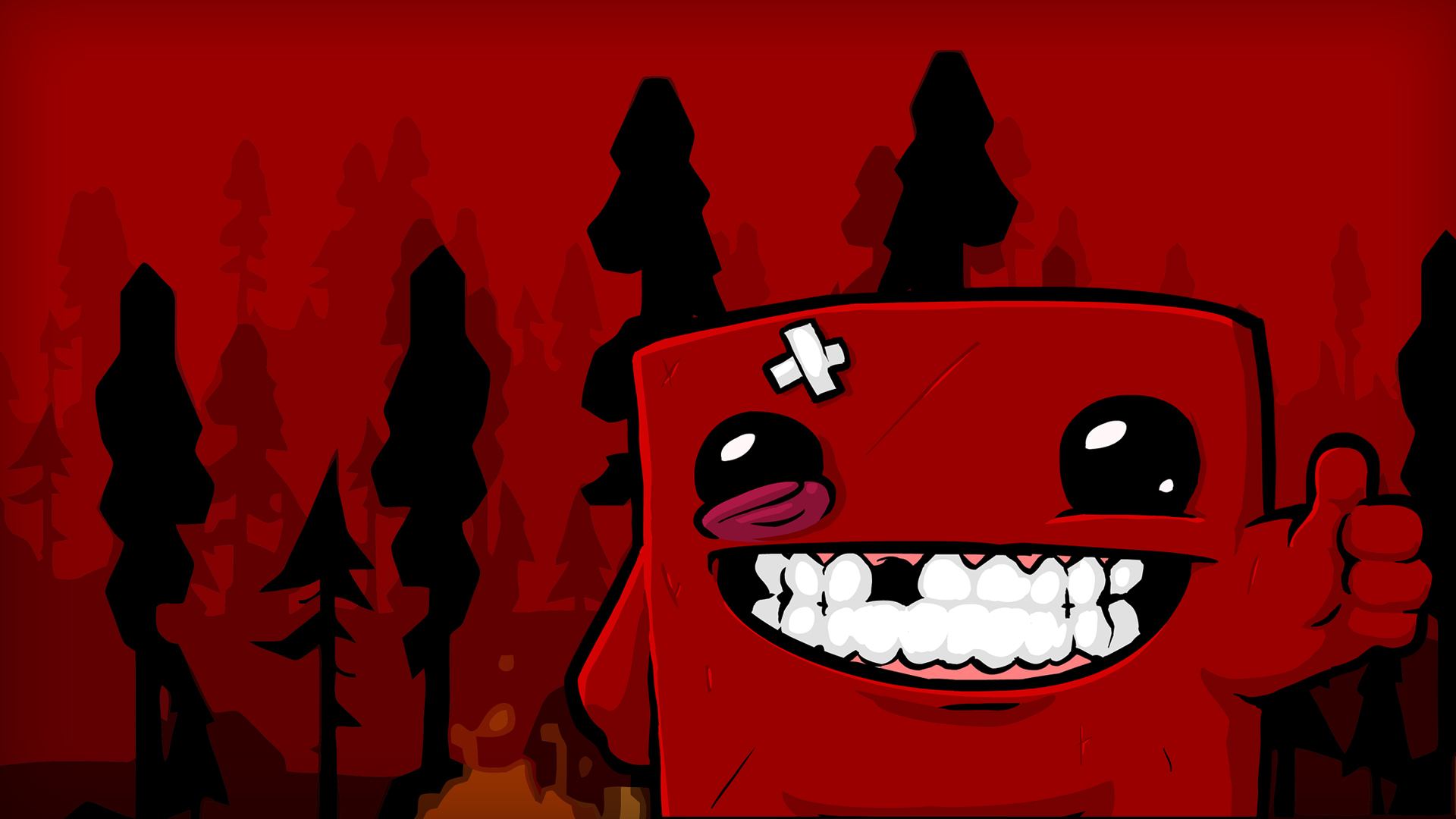 The man behind the meat

I had the chance to speak with Tommy Refenes, one of the co-founders of Team Meat, and he gave me a much clearer understanding of just how much Super Meat Boy Forever has changed over the years.

As an adamant fan of the original title, on the Xbox 360, I’ve been following development on its follow-up for years now. I remember hearing the very first rumblings of a possible sequel, and I remember just how confused I was when I eventually found out that it was being developed for mobile. My naïve, much-less-bald, younger self couldn’t help but wonder, “How the hell is that even going to work?” 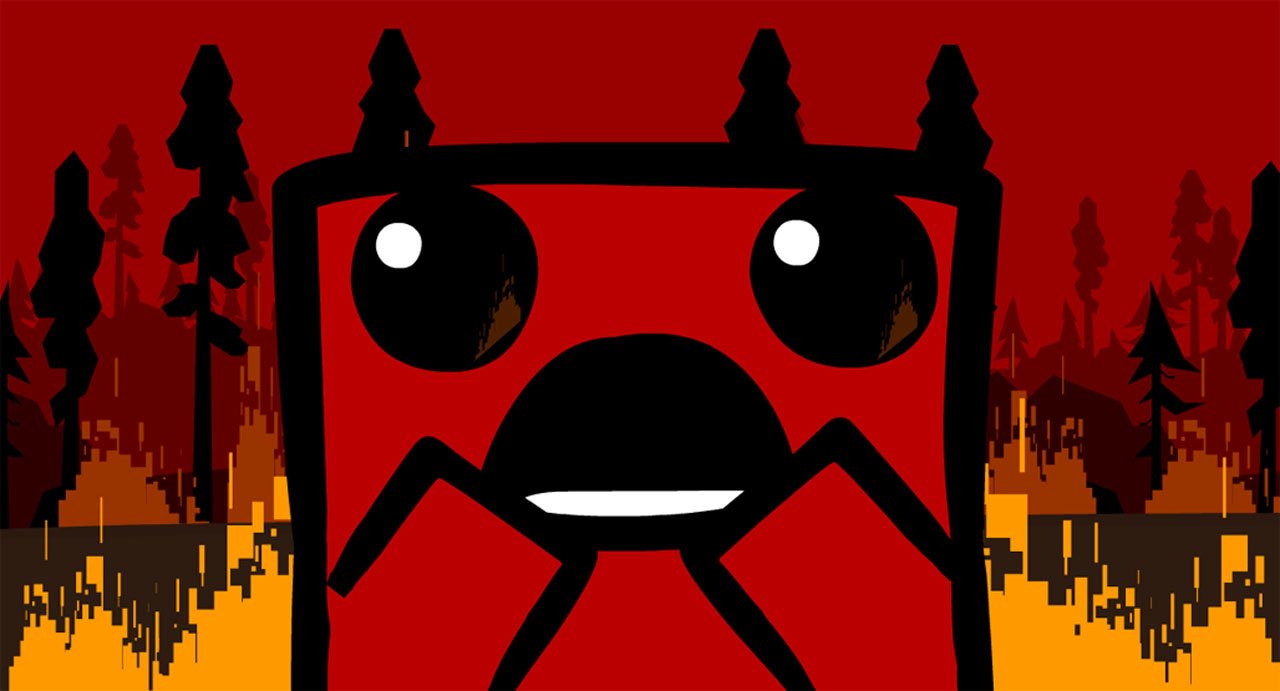 It turns out that Mr. Refenes was just as dumbfounded by the concept as I was at first.

Around the time Super Meat Boy launched, late 2010, the iPhone craze was in full swing… Every major game development company was trying to figure out how to bring their IPs to the phone, and the result was some pretty terrible ports of games that didn’t fit the platform at all, but it didn’t really matter because people wanted to play games on their new devices.

Super Meat Boy was fresh in people’s minds, and our newly realized fans were no exception to the calls for Super Meat Boy on their phones. We had emails CONSTANTLY asking us when it was coming to iPhone and Android. For me, I always viewed this as odd. I knew these players were fans because they want “more Meat Boy,” but I didn’t understand the desire to play “Super Meat Boy” on their phone. My thinking was that it was a twitch platformer, with precision controls, that would in no way work without buttons. I always hated the idea of “cash in” iPhone games that weren’t designed for the platform but were made anyway… In fact, I gave a GDC talk about it in 2010. In that hatred though, I was actually just being kinda dim, and I wasn’t correctly interpreting what the fans were asking for.

I headed to GDC 2011 with tons of “When’s it coming to iPhone” messages in my brain, and while I was in my hotel room one evening it hit me… This realization that “People don’t want Super Meat Boy as it exists now on their phones… They want a Meat Boy game on their phones… They want a game that FEELS like Meat Boy and makes them feel like they feel when they play Super Meat Boy,” and immediately I thought “this is a challenge! I can do this!” With this new realization (that took me WAY too long to get to), and being bored in a hotel room (I don’t go to parties), I pulled out my laptop that had all of the Super Meat Boy code on it and set out to make a “1 button Meat Boy game.”

After a night of messing around with controls and making a few prototype level concepts, I felt I had something with the potential to feel like Meat Boy but playable with one button or two buttons, which would translate to a phone screen or any other thing with at least two buttons. 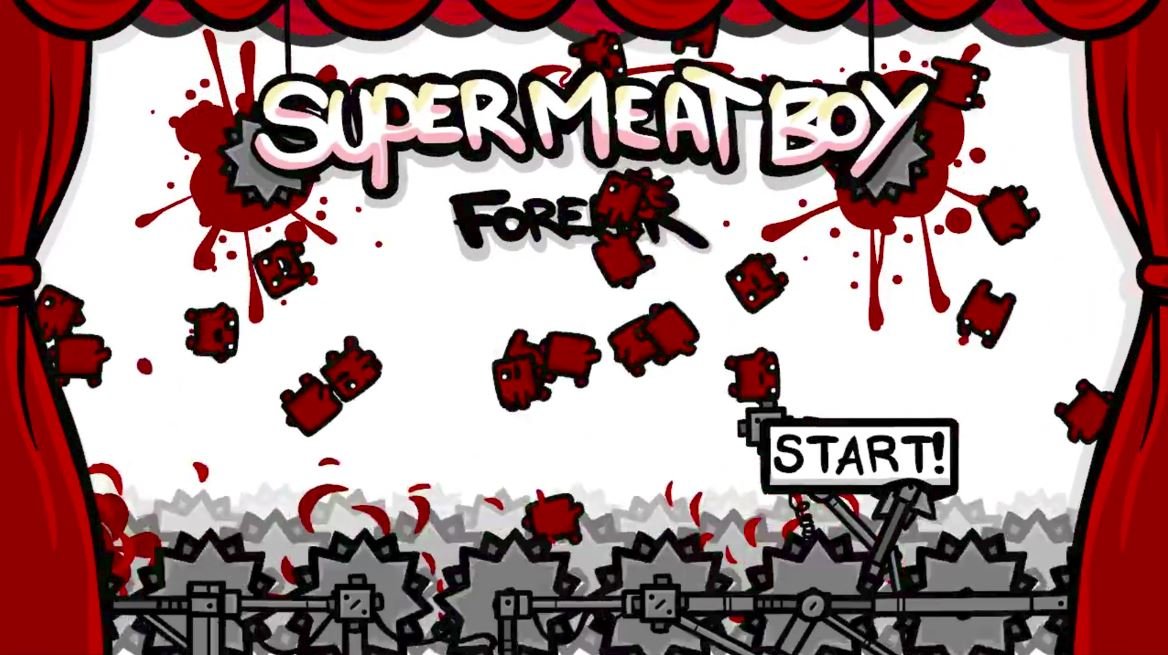 Fast forward three years, and they were readying a build of the game to show off at PAX Prime (now PAX West). They even put together a small, surreal slice of video called, “A Voyeur for September.” This turned out to be a teaser of sorts for the new game. The title was an anagram for “Super Meat Boy Forever,” and Mr. Refenes stated, “I was legit surprised that people figured that out almost immediately!”

By then, he should have known just how rabid and obsessed the fan base was, but I’m sure that was a real wake-up call. 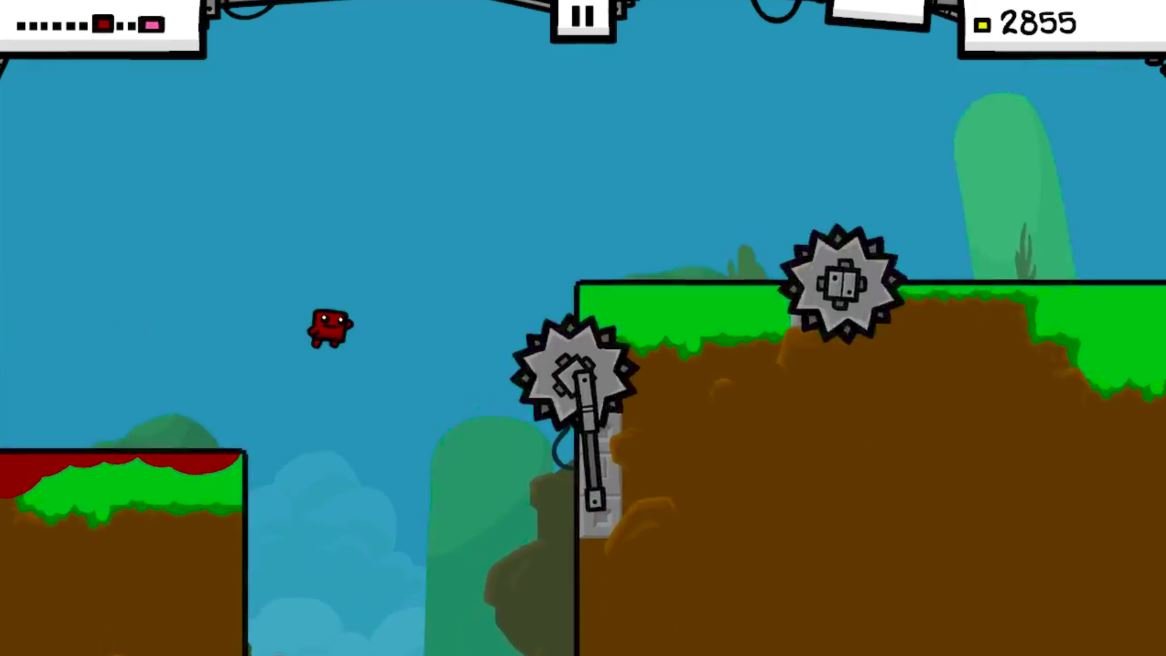 They initially intended the new game to be a “palette cleanser in between big projects,” containing around three chapters and nine levels. However, life had other plans in store, and the two founders of Team Meat, Edmund McMillen and Tommy Refenes, parted ways.

Development on Super Meat Boy Forever stagnated, mostly due to everyday life getting in the way, and Mr. Refenes ended up showing a near-identical build of the game for the next two years at PAX, with minor technical improvements. While they were met with plenty of delays, it would hardly mark the end for the studio. 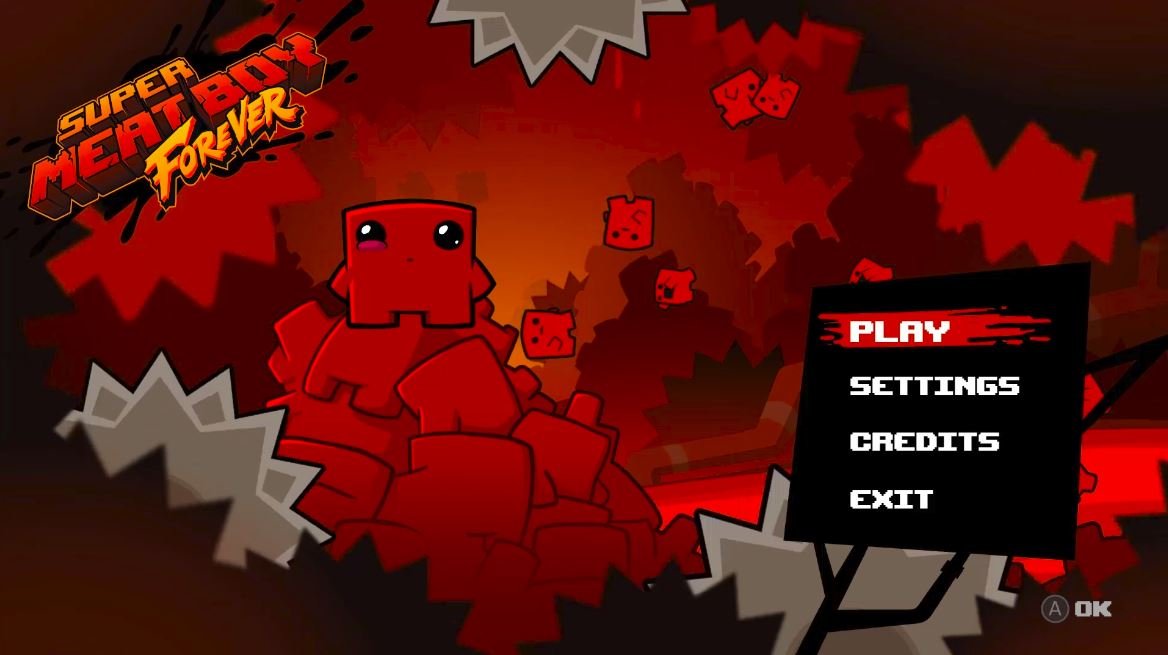 Near the very end of 2016, Super Meat Boy and Team Meat moved to me to continue. Work began again on Super Meat Boy Forever in early January 2017. After almost 3 years, I was aching to realize this game. All I had at that time was the prototype from 2014 but no longer was this going to be the palette cleanser game in between big projects…. This was now going to be the big project.

So… I scrapped everything and re-approached the development with “This is Super Meat Boy 2” in mind. I kept the base controls and feel I’d designed, I got rid of all the assets, I got rid of my level generation code, I got rid of the few prototype levels we had, and I started over. Not quite a blank C++ project, but pretty close. I did keep the music because Ridiculon is awesome and timeless. 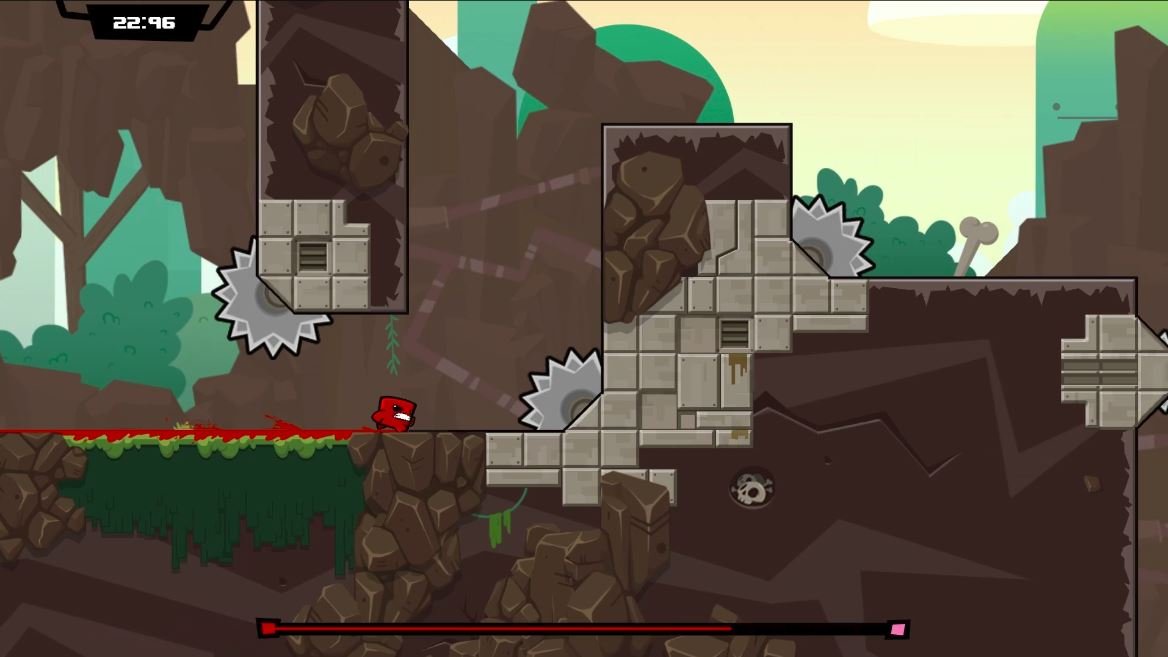 This time around, Refenes is handling the story, and he’s using it as a means to deal with some of his own insecurities. He managed to turn this into a reflection of his potential future with his wife, Shannon, and their hopes to one day have a child.

I wanted Meat Boy and Bandage Girl to grow as a couple, and I didn’t want to do the exact same story as last time. Shannon and I have always planned on having kids, but to be completely honest, the idea was terrifying to me. I knew that was an irrational fear. I’m a dude with money that lives in a nice place and has good health care… Having a kid shouldn’t make me scared, but it did (and still does a little bit).

I think deep down I created “Nugget,” the daughter of Meat Boy and Bandage Girl, as a way to “get over myself” when it came to my children fears. In writing Nugget’s character, I’ve made her personality what I would want my child’s to be like. She’s happy, she’s funny, she thinks everything’s a game, and there is an air of joy around her that Dr. Fetus doesn’t understand, and it drives him nuts.

According to Mr. Refenes, 2017 marked a major “reset” for Super Meat Boy Forever. Team Meat has been expanded to six other individuals, and he’s even found that he enjoys writing the story this time around, on top of his many other duties.

When asked about Edmund McMillen’s past involvement in Super Meat Boy Forever, despite the fact that he’s no longer a member of Team Meat, Mr. Refenes replied, “I always give credit where credit is due, and having worked in shitty industry jobs with questionable crediting practices, I’m a strong believer in acknowledging the work people have done.”

That’s a refreshing stance in an industry plagued with cynicism. The new game is still scheduled for a 2018 release date, and I can’t wait to finally get my hands on it.