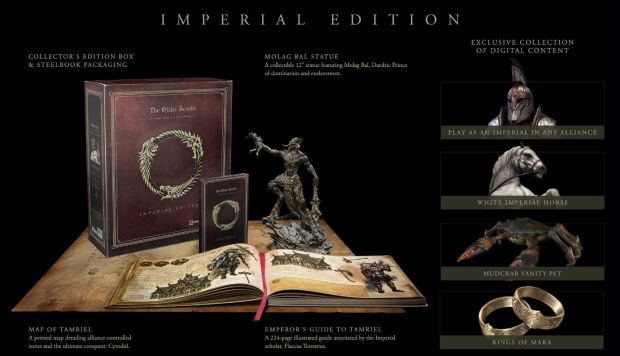 Whoops! Looks like Amazon screwed up. An Amazon user by the name of Char noticed that the Dishonored Game of the Year listing had an image of The Elder Scrolls collector’s edition instead.

The Imperial Edition as it’s called will include a collector’s edition box and steelbook packaging, a Molag Bal 12″ statue, map of Tamriel, and a 224-page illustrated guide book annotated by the Imperial scholar, Flaccus Terentius.

Other bonuses will include exclusive digital content, the ability to play as an Imperial in any alliance, a white Imperial horse, a Mudcrab vanity pet, and the Rings of Mara.

No word on price, but you know, safe to assume it’ll be expensive as are most collector’s editions.