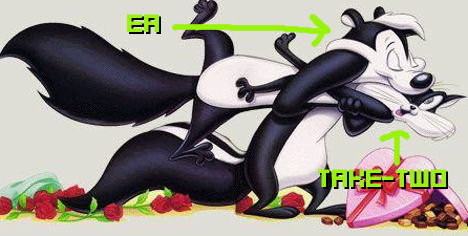 After months of boring press manipulation and endless talk about stockholders, it’s finally over. Electronic Arts has officially ceased its Pepé Le Pew-style courtship of Take-Two and will let it back into the wild — kind of like having it in a Pokéball before it breaks out and runs away. It was exactly like that.

Electronic Arts… today announced that while EA continues to have a high regard for Take-Two’s creative teams and products, after careful consideration, including a management presentation and review of other due diligence materials provided by Take-Two… EA has decided not to make a proposal to acquire Take-Two and has terminated discussions with Take-Two.

The two companies were in talks, but it seems that they had broken down for reasons not yet clarified. Take-Two, for its part, issued the following statement:

We remain focused on creating value for our stockholders and our consumers. This has been our goal since EA launched its conditional and unsolicited bid six months ago, a bid which was repeatedly rejected by our stockholders. As part of that commitment, we remain actively engaged in discussions with other parties in the context of our formal process to consider strategic alternatives. We’re especially proud of the success we’ve enjoyed over the past eighteen months and we remain confident in our ability to generate value for stockholders.

EA CEO John Riccitiello didn’t seem too fazed by the loss of potential goldmines like Grand Theft Auto or BioShock, choosing instead to toot his horn about Spore, Mirror’s Edge and Warhammer Online, among other titles.

Seven months, and it’s all over with nothing having really happened. Kind of reminds you of life in general, really.