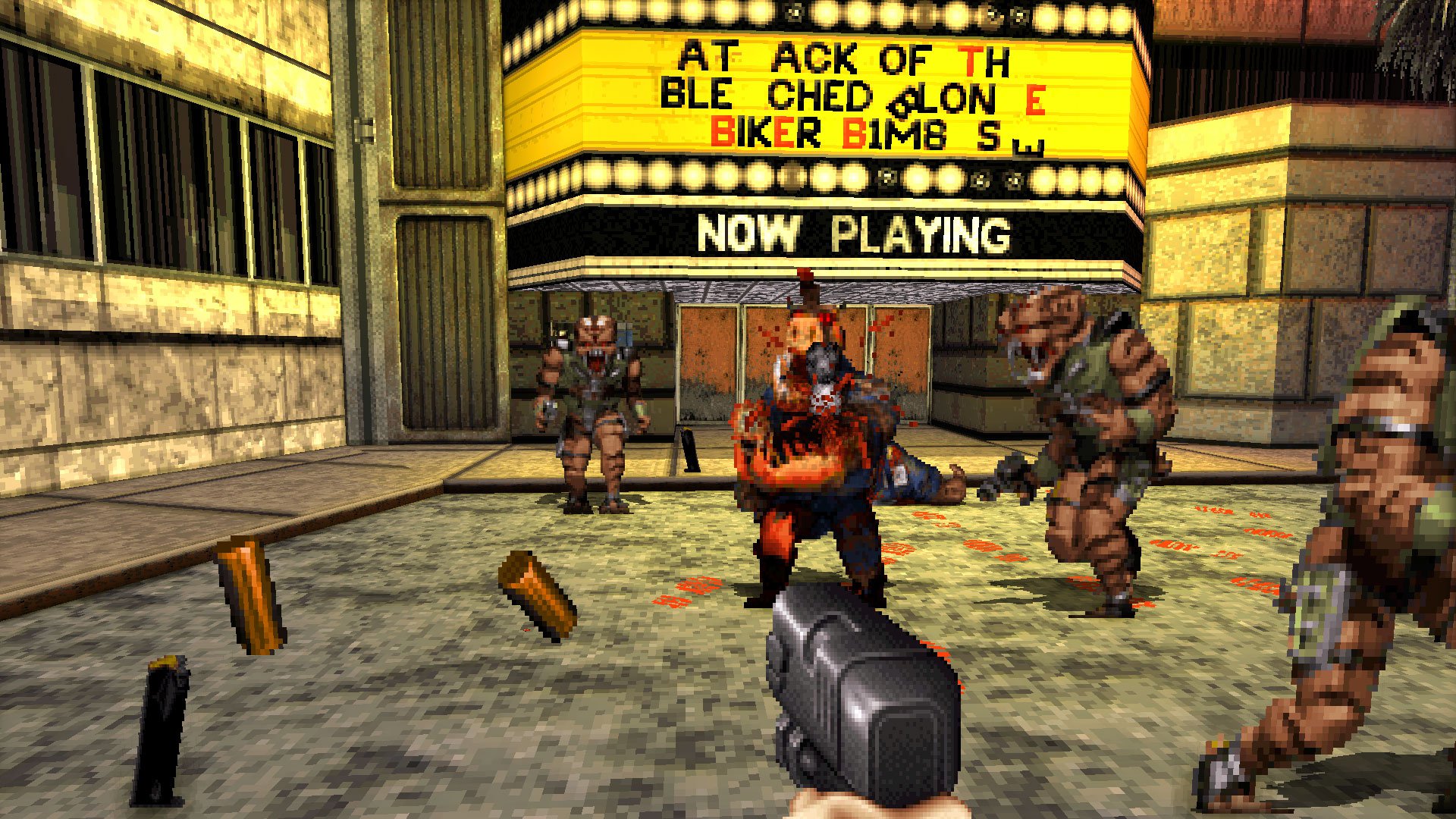 Balls of steel, heart of gold

My previous experience with the Duke Nukem franchise has thus far been relegated to Duke Nukem Forever, an overwhelmingly unpleasant experience that I cannot recommend to anyone with a pulse. As a result, when I wandered into Gearbox Software’s hotel suite at 8:45 this AM to play Duke Nukem 3D: 20th Anniversary Edition World Tour (aka DN32AEWT) for the first time, I had unbelievably low expectations.

In hindsight, I’m actually surprised by how terrible Forever turned out. Duke Nukem 3D is a landmark in the history of first-person shooters and still manages to provide some legitimate thrills despite its considerable age. It’s not perfect by 2016 standards, but you could do worse if you’re looking for some nostalgia.

My biggest concern going into DN32AEWT was how it would treat women. Forever was one of the most misogynistic video games ever released into stores, and I was apprehensive about seeing the game that inspired this awful scene. Good news and bad news: there are strippers, but they’re little more than repeating GIFs for teenagers to ogle. It’s the kind of dumb that subtly contributes to an unfriendly culture, as opposed to being actively violent towards women.

The rest of the humor never really landed for me, but that doesn’t mean it actively sucks. For example, one of the new levels is set in Amsterdam, and you can fight some aliens in a legal marijuana shop. Haha, weed, am I right? The majority of DN32AEWT feels like a dad trying to be edgy, so it’s less offensive and more adorable. 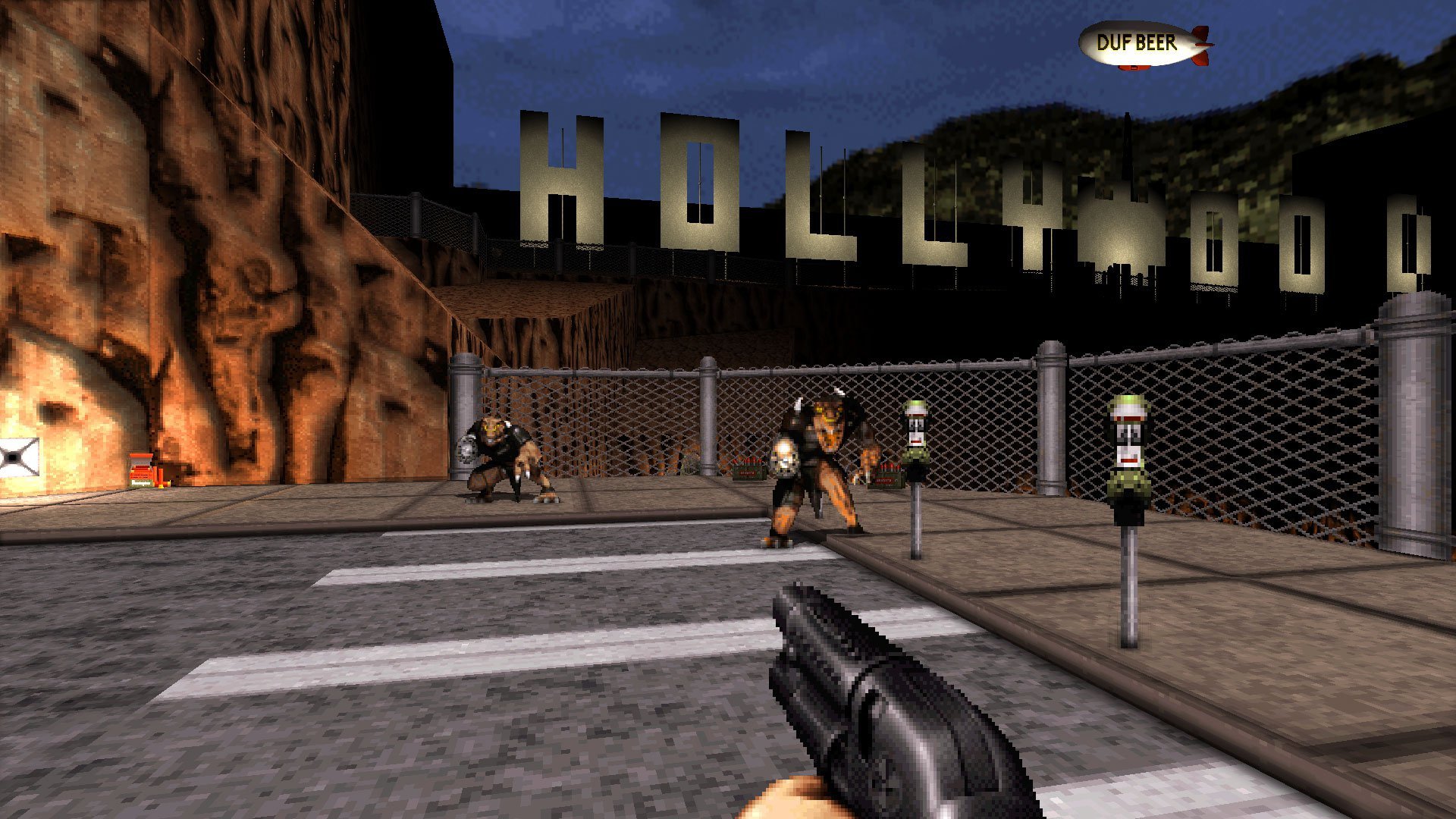 Speaking of the new episode, I won’t be able to tell you the minute differences between a “classic” Duke level and the new levels from DN32AEWT. They both have secrets, there are plenty of enemies standing between you and your goal, and there are some delightful guns hidden behind walls. Those of you looking for something unique from a Duke Nukem 3D reunion will likely walk away disappointed, but to me it felt like more of the same game — which doesn’t seem like a bad thing.

For me, the biggest surprise from DN32AEWT was its difficulty. After playing console shooters for years, being given another console shooter without any noticeable auto-aim felt like I had to re-learn how to shoot. Killing a single enemy was incredibly vindicating, and death a just reward for my hubris. I appreciated the game’s rewind function, allowing you to pick the moment of your respawn, an artifact of the Xbox 360 port.

DN32AEWT is a hybrid of the Megaton Edition and the Xbox 360 version of Duke Nukem 3D, incorporating different aspects of both; the aforementioned rewind function from the 360 and online multiplayer from Megaton Edition. In the vein of the recent Double Fine/LucasArts adventure game re-releases, you can also switch between render styles for Maximum Nostalgia or turn on developer commentary if you are more interested in Duke Nukem 3D as a cultural artifact. (Like me!)

Look, Duke Nukem Forever wasn’t all terrible, but it was definitely a blight on human history and I wish the United Nations had intervened before it hit shelves. Duke Nukem 3D is not as bad as that, which — to me — seems like a Herculean feat. I was legitimately intrigued by what I saw of DN32AEWT, which is more than I ever expected from a Duke Nukem game.