I used to love Duke Nukem. Rather, I loved the entity that I believed Duke Nukem to be. Like many of you, I once thought of him as a funny joke, an exaggeration of action videogames whose balls-to-the-wall attitude could only be taken as a ribald jest.

Then, after playing Duke Nukem Forever, I took a long, hard look at the Duke Nukem character and realized he was not the astute parody I thought he was. I’d been lied to … or rather, I had lied to myself.

For what we think of as Duke Nukem is actually a Duke Delusion. 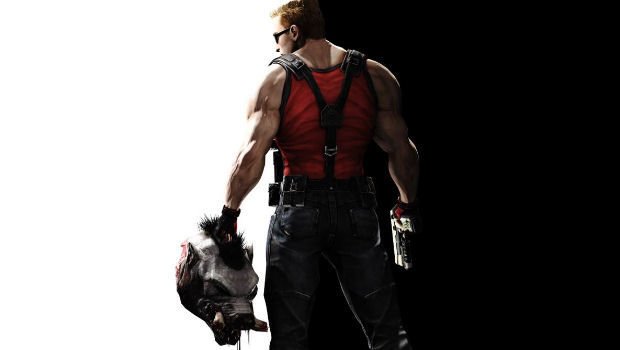 There seems to be two very distinct Duke Nukems. There’s the “ideal” of Duke Nukem, and the “reality” of Duke Nukem. The ideal is the one that you’ll hear Gearbox’s Randy Pitchford talk about in interviews — he’s witty, he’s sexy, he’s an extreme character who parodies the action genre and dishes out extreme loads of asskicking.

Then there’s the reality — a series that doesn’t so much parody an existing property as parody itself. Duke Nukem is really about action that falls flat in comparison to other, more competent examples of the genre, with a character who spouts unfunny, stolen dialog in a dry, flat, borderline monotone style of delivery. There is simply no joke in play when you examine Duke with a mind free of preconception. If he’s intended as a comedy character, then the results have truly failed.

Duke Nukem has survived in our minds as an over-the-top, hilarious pastiche. When you peel away the marketing hype and the character we’ve partially invented in our collective mind, however, you’ll see something quite different. Duke Nukem is not what we think he is.

Apologists will tell you that Duke Nukem is a satirical creation. They claim his misogynistic attitudes and sociopathic tendencies are meant to mock cheesy action films and typical videogame heroes. It’s easy to sit back and say Duke is a parody, but let me ask — what exactly is he parodying? Duke treats women like shit and his games portray females as ditzy sluts who exist only to satisfy Duke’s urges. To the best of my knowledge, the films of Arnold Schwarzenegger and Sylvester Stallone have never been about that. To my mind, the majority of first-person-shooter games fail to include a character like Duke. He’s more of an original character than we give him credit for, but that is by no means a positive thing. 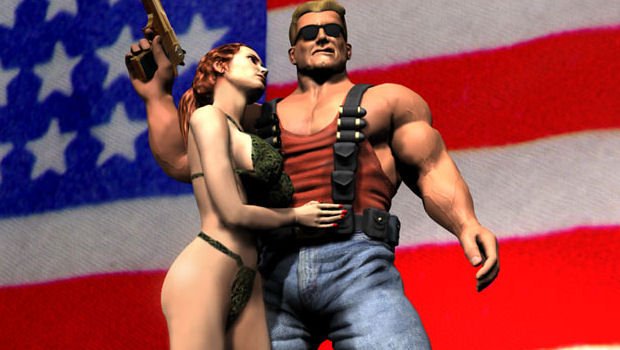 It’s more factual to say that Duke creates a problem, rather than highlights and mocks an existing one. We pretend Duke Nukem makes fun of action heroes, but action heroes don’t inhabit titty bars and spend their time getting blowjobs from women in school uniforms. When Duke delivers cheesy one-liners, he’s not making a joke, because the one-liners have been ripped verbatim from movies like Army of Darkness and robbed of their original context. Duke makes direct, sincere references or outright steals from action movies. He does nothing to make fun of them, he simply mimics them at best, and that’s not enough.

For a parody to work, you have to have context. It can be from a comedian expressing an opinion in an overtly extreme manner that runs contradictory to what we actually know about his personality. It can be something like The Onion, that uses a straight-faced news presentation to describe fantastical and unbelievable events. What it can’t be is a man who simply acts like a dick without consequence, irony, or comparative extremity. It can’t be something that pretends to have a message while saying absolutely nothing.

The Police Squad series makes fun of detective stories by juxtaposing gritty murder mysteries and stereotypical noir characters against an absurdly ineffectual protagonist and a variety of ridiculous situations. Stephen Colbert makes fun of political pundits by taking their attitudes and applying them to nonsensical, sometimes abstract conclusions, presented by a character whose opinions are too extreme to take seriously. Duke Nukem “parodies” action films by … doing what? Copying their dialog? That’s not enough to qualify for parody status. It’s more like plagiarism at best.

I offer you The Simpsons‘ McBain character as an example of action hero parody done right. McBain is very clearly a spoof of Arnold Schwarzeneggar. His one-liners aren’t just stolen from Arnold’s movies, they’re intentionally less clever and more convoluted, with quips such as, “Right now I’m thinking of holding another meeting … in bed.” His scenes in The Simpsons frequently show him doing outrageously heroic things, such as delivering Unicef pennies to starving children, jumping out of planes while on fire, and bursting out of ice statues with the power of his rippling biceps. The character is outrageously audacious, and that’s why he’s a successful parody. 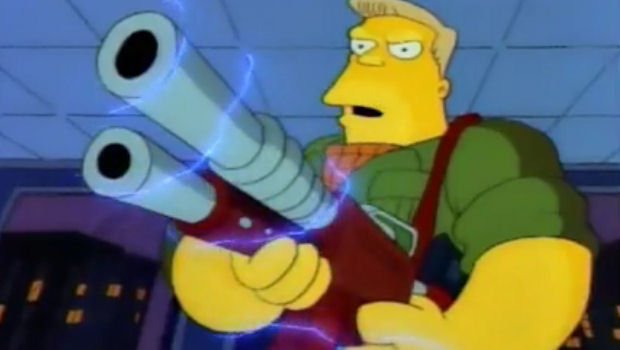 Outrageous exaggeration is key to a good parody, and Duke has never really been outrageous. The flat delivery from Jon St. Jon, the fairly standard FPS combat situations he finds himself in, and the fact that he is presented — both within the game and without by developers — as a genuinely affable, cool, and witty individual, creates a character that comes across as grotesquely sincere in its rather disgusting commentary on females and the idea that Duke Nukem is what every man should try to be like.

Duke Nukem is not over-the-top. Compare his games to those such as Serious Sam or Bulletstorm. In those games, the action is relentless, the characters highly exaggerated, and the humor hard to miss. Sam “Serious” Stone sounds functionally retarded and fights with a handheld cannon against an overwhelming assortment of farcical and impractically designed enemies, while Bulletstorm‘s characters go out of their way to come up with nonsensically vulgar lines such as, “I will kill your dick.” Again, take a look back to Duke, a character whose games are shockingly slow paced when compared to other shooters, and whose lackluster dialog is concerned more with aping smooth one-liners than trying to make anybody laugh.

Duke is never allowed to be uncool. That’s why his writers play it safe by refusing to let him have any self-deprecating lines or deliberately awful one-liners. You won’t catch Duke Nukem making a lame pun like McBain — unless it’s a pun directly copied from an existing film, because heaven forbid Duke be allowed to sound stupid all on his own. Even then, when he does spout a lame quip, he doesn’t do so in a comically awkward way like successful spoofs do — it’s always said with utter confidence, and nobody will ever call him out on it.

It’s not enough to justify the Duke character by calling him a parody, because he has done nothing to earn that distinction. His character is not exaggerated, his games are fairly mundane, the majority of dialog is stolen from the genre that’s meant to be parodied, and Duke as a character is presented as genuinely competent and beloved, the man we’re supposed to look up to. These are not the ingredients for parody, regardless of what the developer intends — or claims to intend.

Any successful parody would have turned Duke into something wretched and pitiful, not adored and envied. Any parody — funny or not — will be able to at least point to evidence of its intention. Duke Nukem cannot do this. You can easily tell me that my own dabbling in satire and parody isn’t funny, but I can at least provide evidence in the extremity or redundancy of the opinions, and the deliberate contradictions in the writing, as evidence of intent. You’re free to say it’s unfunny (plenty do!) but only a dullard couldn’t see the point.

Duke looks more like a celebration of the stupid, the hateful, and the psychopathic than a condemnation of it. His games carry a tone of sincerity to them due to unoriginal dialog, mundane performances, and bog-standard gameplay, and when challenged, Duke’s supporters cannot provide evidence to the contrary.

One fan hit me up on Twitter after my review of Duke Nukem Forever and said it was obvious that Duke Nukem was a parody. When I asked him what Duke did to qualify as a parody, rather than simply being an example of the thing it was supposed to parody, he just kept repeating — “It’s obvious. Just play the game. It’s obvious.”

No, it isn’t obvious, otherwise we wouldn’t be having this conversation.

That is why Duke is not a parody, and the character we think he is qualifies as nothing more than a group-contrived delusion.