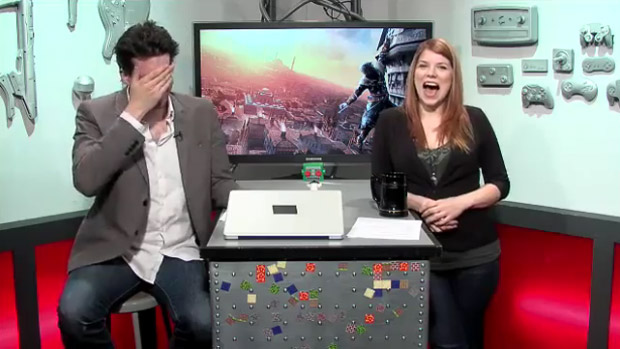 Good evening, Destuctikids! As it’s a Friday, we shot today’s Destructoid Show in front of a LIVE internet audience. In case you missed it, here it is.

Today, in addition to giving away some Assassin’s Creed Revelations beta codes, we also covered some hard-hitting news. By “hard-hitting,” I of course mean “video game related.” First, the Dead Island comic book that was given away at Comic-Con is now available online. It looks like Team Bondi, the Australian studio behind L.A. Noire, isshutting its doors. We also talk about chainswords and devastation in Warhammer 40K: Space Marine. If you’re too much of a sissy for Serious Sam 3: BFE, Croteam’s got a support line just for you. Next, the folks at Bethesda the possibility of an Elder Scrolls MMORPG, as well as their approach to bugs in Skyrim.

Destructoid editors Hamza Aziz and Nick Chester are in Los Angeles right now for the Call of Duty: XP event, so we talked about some of the news coming from that. Details surface on the pricing of CoD: Elite, as well as its integration with Facebook Connect. There are also new weapons and new modes. There’s a full news recap HERE.

This Monday’s episode will be an all-Dead Island review special. That’ll go live on our YouTube channel the minute the embargo’s up, at 12:01 AM. So be sure you’re subscribed. We’re also giving away five more Assassin’s Creed Revelations PS3 beta codes over the course of the weekend. If you haven’t already, follow us on Twitter.