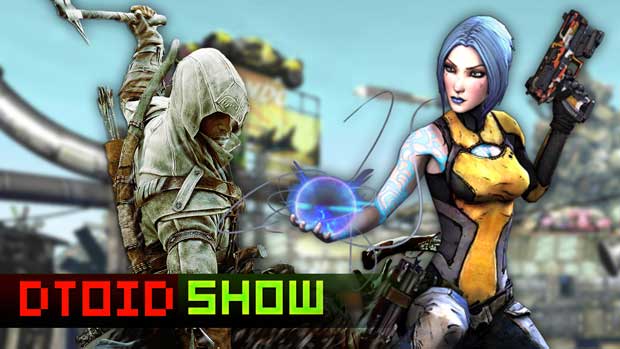 As it is a Friday, The Destructoid Show was live this afternoon, and in case you missed it, here’s a recording. For you to watch. With your eyeballs. Your gross, slimy eyeballs. Ewwww.

It was just announced that Assassin’s Creed III will have a co-op mode called “wolf pack,” and Ubisoft also released their Boston gameplay demo from E3. David Cage and Ellen Page’s Beyond: Two Souls is got shown off plenty at Comic-Con, and it sounds pretty cool, in spite of panel-moderator Greg Miller dorking it up with his lame dumbness. Injustice: Gods Among Us has a new trailer that shows off Nightwing and Cyborg. The Steam summer sale has begun, which is the worst thing to happen to everyone’s wallet since the last summer sale.

In the second half of the show, we talk about how Epic Games has revealed that their upcoming adorable zombie tower defense game Fortnite is A) running Unreal Engine 4, and B) going to be a PC exclusive. Jeez, it’s been a while since Epic released one of those.

Finally, Tara gives her impressions of Borderlands 2, as well as answered some of your questions. She put up a video here, which you should also go check out.