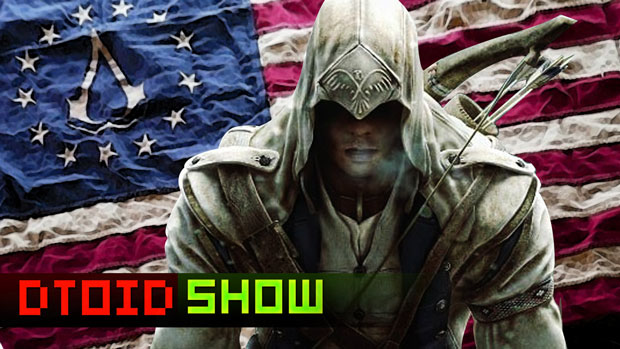 Hey guys! Tara and I are back from the scorched wasteland of Southern California, where we were for VidCon. I’d like to thank you guys for putting up for Friday’s canned rehash episode. I promise we don’t do any more of those for a while. Except this Wednesday, because it’s Independence Day.

Today, we talk about the possibility that Grand Theft Auto 5 might be making an appearance at Gamescom in August. We’re basing this on a 2-second clip of the trailer showing up in a trailer for Gamescom. Yeah. More importantly, there’s a new Assassin’s Creed III trailer, and details about the very fancy collector’s edition. Speaking of collector’s editions, we’ve got details on the Limbo one, the 20th anniversary Kirby’s Dreamland collection, and Ni No Kuni: Wrath Of The White Witch: Wizard’s Edition. Dear God, Namco Bandai, give me it. I want it. Now. Please. Give it to me.

Anyway, Tara also runs down the highlights of Jordan’s Spelunky review, and we discuss how the announcement of Sony’s purchase of Gaikai is undeniably confirmation that the Playstation 4 will double as a professional grade fog machine. You know, because clouds. Obviously.