With DmC Devil May Cry: Definitive Edition out now, fans of the series have another title to keep them satiated till the next one is ready. As you’ve likely read, Chris gave his impressions of the game earlier. He was impressed with the changes and upgrades made to the game, but was still ho-hum about the story. Which is fair — it’s certainly abrasive and in-your-face.

For me, I was a big admirer of DmC when it came out, and experiencing the Definitive Edition back in January was a total joy. But one thing many fans have been asking for since its debut was a specific rundown of what was changed and upgraded.

Capcom gave Destructoid an advance look at the complete changelog, featuring well over six pages of notes, revisions, and other augments made to the title. For the hardcore DMC fan looking for a complete rundown of what’s what with DmC DE, this is something you’ll want to see.

With Hardcore Mode being the highlight of Definitive Edition, you’ll want to enable that as soon as possible, especially if you’re quite familiar with the game or are otherwise up for the challenge. Though if you enjoyed DmC before as it was and just want to be able experience it with a new visual fidelity, you can by all means do so. Ninja Theory’s Rahni Tucker, who was the combat designer on the original title and now serves as the creative director on Definitive Edition, commented on a number of the upgrades DmC gained.

“The point of HCM is to create an experience that [is] still [Ninja Theory’s] DmC, but with a bit of a throwback to the classic DMCs in terms of balance,” she said. “We didn’t make these changes to the default game, because there are a lot of players who enjoy the current balance; and we didn’t want to alienate those players. This way everyone has the option to play the game with the difficulty/balance that suits them. The hardest felt changes in this mode are those to the style system. Getting a SSS, and keeping it, is a lot more difficult in Hardcore Mode. Devil Trigger also throws-back to original DMCs with HCM active, so the player will need to stay on their toes after activating it.”

Here are a few examples of what’s been altered for Hardcore Mode. 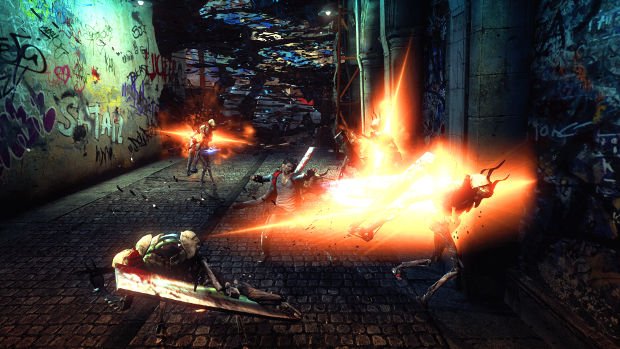 One of the biggest changes in Hardcore Mode that I’m sure many will appreciate are the infamous color enemies. With the modifier enabled, players can use whatever weapon they want against these specific enemies, however the like-element weapon is still best for the situation.

“This was always a controversial point,” said Tucker. “On the one hand, DMC is all about variety and being able to creatively mix combos, and the red/blue enemies deflecting Dante’s attacks went against that; however, we found during focus testing that players were confused about which weapons to use, so for clarity and feedback purposes the deflection was much better. In the end, after seeing fan feedback, we’ve changed it for DE so you can hit any guy with any weapon. Using the correct weapon causes hit reactions (they don’t get interrupted by the wrong weapon) and still deals more damage.”

And that’s just the tip of the iceberg. You can find more info about the changelog on Capcom-Unity’s blog, featuring details about parry windows, Vergil gameplay, and the finer benefits of having an increased frame rate to work with. After reading through the changes, and getting a sense of the developer’s view on DMC, I have an even greater appreciation for the game. It’s not often we got a detailed look like this with developer commentary, so it’s definitely something I respect Ninja Theory for.

Also, the launch trailer is excellent. ’80s gothic rock from The Lost Boys is such a great fit for DmC.