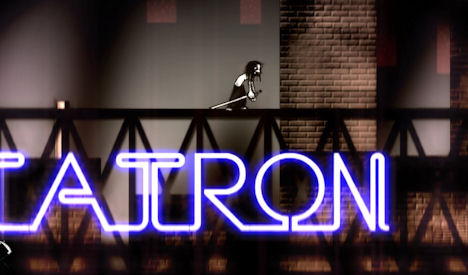 Regardless, it is James E. Silva’s violent 2D action game which is coming to XBLA, and I can’t wait. Silva has been spilling some new details concerning Dead Samurai, including the promise of a rhythm game, which he fully admits is based on his own Guitar Hero and Rock Band addiction. Apparently, you will be able to use a GH or RB guitar peripheral to play Dishwasher‘s “Killer Solos” minigame, which is pretty damn awesome.

The guitar-based madness doesn’t end there. Once you discover a certain item, you can get a friend to plug in a peripheral and help you out in the main game as The Phantom Guitar, performing spin attacks by lifting the instrument, locking onto enemies with the whammy bar and using the buttons to dish out damage.

The full details are after the jump, but the guitar compatability has turned an already hot looking scroller into something absurdly cool. Hopefully it works as well as it sounds, because it sounds incredible.

1) Killer Solos Minigame: – After I got addicted to Guitar Hero and Rock Band, I ended up a bit curious to see what it would be like to implement my own rhythm minigame. The one in The Dishwasher proved to be such a hit that I kept it in there. You can beat Killer Solos to earn Psycho Picks, which you use to upgrade your stuff. You can play solos with either a gamepad or guitar peripheral (Rock Band and Guitar Hero work fine). – You can also earn Psycho Picks in Time Attack challenges, where you have to kill a certain number of enemies in a short amount of time (duh).

2) Phantom Guitar: – After finding the Amulet of Phantom Rock, you’ll be able to have a friend plug in a guitar and help out as the Phantom Guitar. The Phantom Guitar player can lock onto enemies with the whammy bar, play notes and chords to deal damage, and do a death-dealing spinning attack by lifting the guitar. You can also make your own music this way, but I won’t be surprised if the new Guitar Hero does a slightly better job in this department.

3) Massive Damage, Massive Combos – The more damage you can deal before your combo meter runs out, the higher your score will be. Compete with the rest of the world in 50 Arcade Challenges, the Dish Challenge level, and the Tourney Solo Campaign. Hit 100 million in an arcade level, there’s an achievement in it for you!