Today is Doom‘s birthday, as you may well know if you read Destructoid earlier today. Doom was an old favorite of mine growing up, and is remembered with such rose-tinted spectacles that I still play and enjoy it today. I was a poor child growing up, so it was inevitable that Knee Deep in the Dead, Doom‘s first episode distributed as Shareware, would get a ridiculous amount of play from me.

I eventually upgraded to Doom II, and played it through to completion on my grandfather’s superior computer. It was an obsession of youth, and contributed to my growing up as an emotionally healthy individual.

The thing that made Doom so memorable for me was its bestiary of terrifying enemies. Well, they were terrifying at the time, not least because a vast amount of them could and would utterly mess you up. You see, Doom was not just a pioneer of the FPS genre, it was also a pioneer of enemies that you felt really, really good about killing. Some of them were annoying, some of them made you crap your pants upon merely hearing their approach. All of them were dicks.

Read on as we select the biggest douchebags of the lot, the ones that prove that only pricks go to Hell. These are the Dicks of Doom. 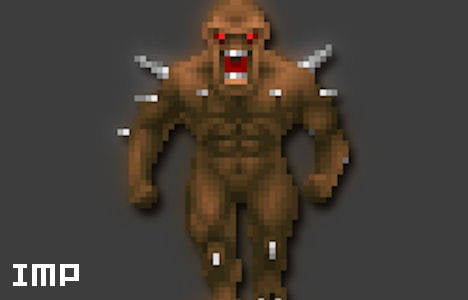 You can’t rightly discuss Doom‘s monsters without tossing a courtesy nod to the Imp, that most classic and memorable of Hell’s forces. That’s not to say it isn’t a massive dick in its own right, however, as these guys can really be a pain in the arse if they gang up on you.

Although a common and rather weak enemy, able to go down with just one well-aimed shotgun blast, they are nevertheless pretty big assholes. Failure to miss just a few of their fireballs will screw you up, and it’s really irritating when they get close enough to stand there and scratch at you like girls. Also, their heads are shaped a bit like penises, making them dicks by visual association as well. 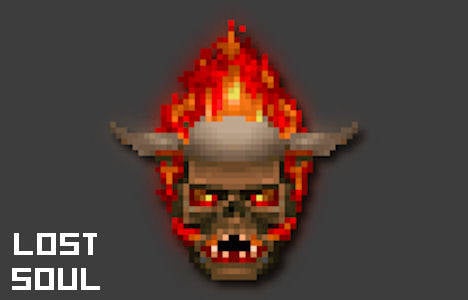 Lost Souls are, like the Imps, quite weak on their own, but prefer to move in numbers. They are small and can traverse a room with incredible speed, which sometimes makes them tricky to hit. Small enemies are notoriously annoying to deal with, and Lost Souls do little to change that stereotype.

They are cowards, they are small and they look like skeletons. They are everything that is bad about Yoko Ono. 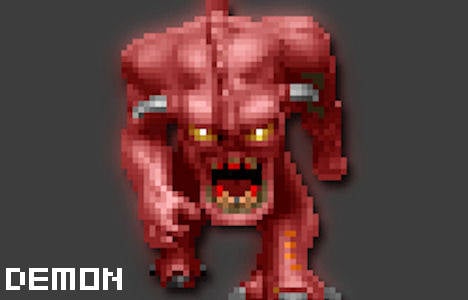 Lacking a ranged attack, Demons aren’t the most threatening of creatures, but their fast movement and ability to really ruin your day if they get too close make them pretty dickish. They look like mutated scrotums, too.

As one of the earliest monsters in the game, and also one of the first real “monstrous” enemies you’ll encounter, they never failed to fuck with the head of a first time player. Up until these guys appear you’re dealing with slow moving zombies or relatively easy Imps. Suddenly you get this giant inverted gonad charging at you and you panic.

Demons make the list for forcing you to run backwards while crazily blasting your shotgun and praying you get trapped by a wall. We’ve all been there. 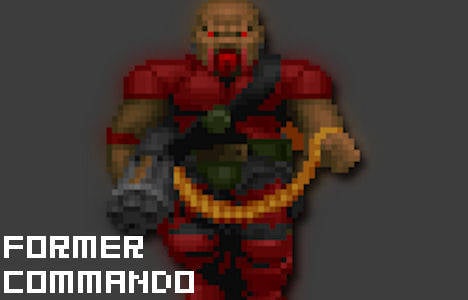 Now we enter the realm of the truly dick-flavored, starting off with the Former Commando, one of the creatures that made their debut in Doom II. I hated these guys, mostly for making one eat humble pie. Sure, the chaingun is a load of fun when it’s in your hands, but these wankers make you taste your own medicine, and the medicine tastes of shit.

I used to think these guys were Chinese when I was a kid, mostly because the mouth and jowel shadow actually looks like a stereotypical Oriental mustache. Maybe it was, and id Software was implying that all Chinese people go to Hell.

Regardless of ethnicity, these chaingun whores are total dicks. 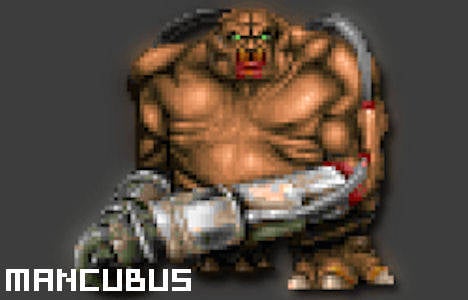 As some of my most active commenters will tell you, fat people are automatically dickish and deserve to be hated. Also, they can’t review games properly because they are fat. Enter the Mancubus, a bit of a bloater with an utterly stupid name. He also has rocket launchers for arms. What a dick.

Slow as all Hell, but their rockets aren’t sluggish, if you get caught in their path, you will be cursing these fat fucks to the hills. 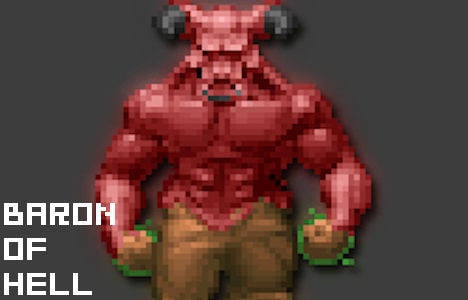 That’s about all you can think when these pink, moist bastards first rear their ugly heads, and you probably won’t finish that sentence before a bunch of weird green crap gets chucked your way. The Baron of Hell is the first clue you’re given that Hell is totally not fucking around, as this stereotypical demon will totally ruin your shit if given half a chance.

Fast, powerful and more durable than the condom that broke on the night of Jeff Dunham’s conception, I used to hate these unrelenting douchebags. Never before has having the ham-tinted complexion of an habitual drinker been more terrifying. 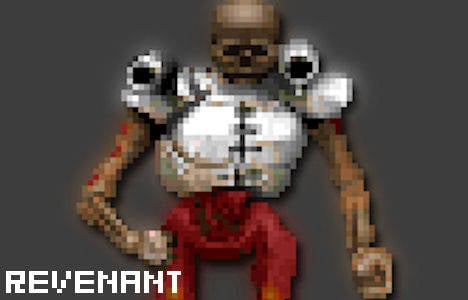 Ooooh, these ones are assholes. Absolutely panic-inducing, too. Introduced in Doom II, these skeletal fucknuts are incredibly fast, and jitter around the place making them very hard to hit. They also fire heat seeking missiles from their shoulders, making them one of the most dangerous enemies in the game.

That’s not the worst of it, however. See, what these twats like to do more than anything is to run up to you and just start punching you in the face like they don’t give a fuck. They’re such huge dicks that you might as well just not bother fighting them. Adopt the traditional Monty Python tactic and run away.

Seriously though, what utter arse sandwiches. 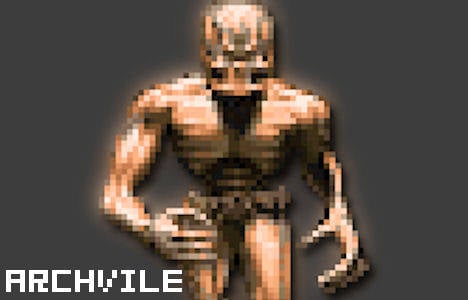 Archviles are, far and away, the worst of the non-boss enemies. They can summon fire which will hit you wherever you are and do significant damage, but worse than that, these complete prickhouses can resurrect dead enemies. Yeah, those pretty pixelated corpses aren’t just lying around for show anymore, this twisted clitbucket will bring them back to life.

That said, the Archvile is home to one of my favorite bits of trivia, which comes in the form of a quote from Doom music composer Bobby Prince:

“The Archvile is an evil healer. Anyone getting in his way is blasted with fire and disintegrated. This includes other demons. But, after he has wrought his destruction, he then goes around and reanimates all of the demons. Because of this interesting dual personality, I decided to give him a very evil laugh as an active sound. For his death sound, I recorded a young girl saying ‘why,’ pitch shifted it down and mixed it with other sounds. The Archvile just doesn’t understand why anyone would want to kill him as he sees himself as only doing good for his fellow demon.”

Awesome bit of creepiness … but regardless of his good intentions, the Archvile is still a humongous, quivering, veiny dick. 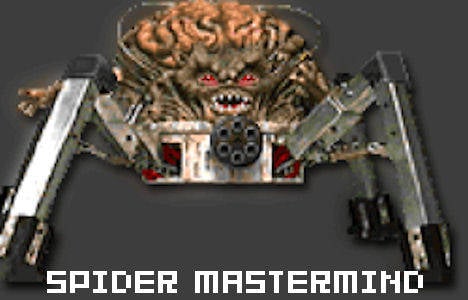 Huge, scary and owner of the biggest machine gun you will ever see mounted to a robotic crotch, the Spider Mastermind is the ultimate boss of the original Doom. You’ll be dealing with this bitch for quite some time whenever you encounter it, as it’s got fair amount of health and its ceaseless hail of bullets will keep even the most experience Doom fan pinned down.

With a high rate of fire and ridiculous accuracy for something that’s essentially shooting with its penis, these guys are undeniable dicks. They also have just four legs, making them total liars about the spider part. 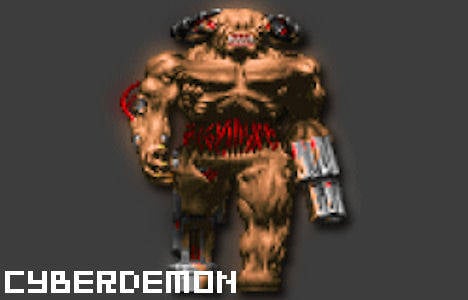 You knew it was coming, and far be it from me to disappoint. Yes, it’s the iconic Cyberdemon, that mass of flesh and wires that exists solely to screw up everything. Its rocket launchers are nothing to laugh at, especially as you can be easily fucked up by splash damage alone, and the fact that he’ll launch up to three rockets at a time doesn’t make him any more sympathetic.

The most dickish part of the Cyberdemon, however, is how long it takes to kill the bastard. You’ll be burying the shrapnel of at least sixty rockets into this guys tits before he’ll go down, and you’re only reward will be questioning what you’ve done with your life. God damn these evil, evil idiots.

That about wraps it up for this little celebration of the Dicks of Doom, but we can’t really depart without one honorable mention: 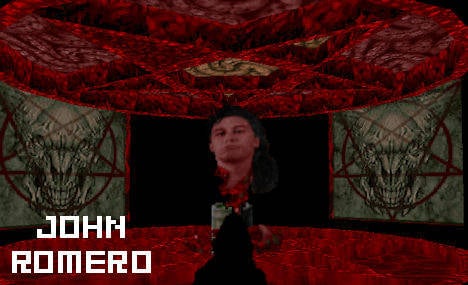 Well, he is a pretty big dick.