Diablo III might not have had the best storyline, even when it comes to dungeon crawlers, but there was a lot happening behind the scenes. There’s a 20 year history there, and the narrative has been continuing on since 1996.

If you’re the type of person who combs through each and every detail, and perhaps is still playing Diablo III, you might want to check out the pair of lore books that were just released by Blizzard. 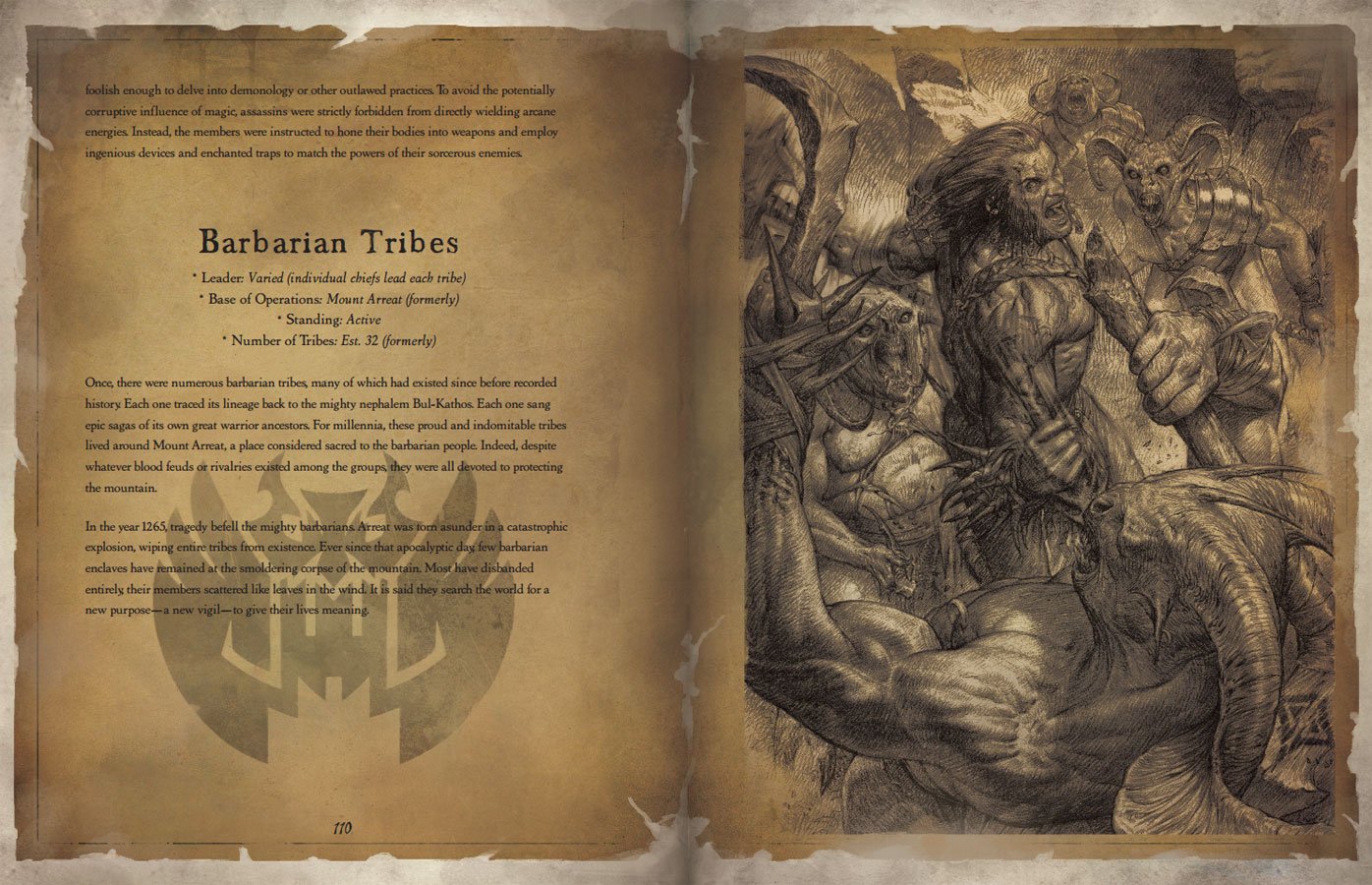 Let’s start with the Book of Cain, because well…it also starts at the beginning. In a somewhat cute/annoying fashion the author is actually listed as “Deckard Cain,” with some attempt to keep the tone of the text inline with his “stay awhile and listen” demeanor. Naturally, I wouldn’t expect overly flowerly language or anything comedic or lighthearted — instead, you’re getting cold hard facts on the Diablo universe, starting with the Eternal Conflict and the rise of Diablo, the Lord of Terror.

But you’re also getting dedicated pages and backstories for bosses from Diablo 1, 2, and 3, like Mephisto, Azmodan, and Duriel — the latter of whom I never actually saw for almost a full year, as my PC would lag so badly while entering its room that my friends would kill him before I could load. As previously mentioned it’s mostly just factual wiki-like information, but done with an in-universe style that makes it a tad more interesting. Plus, it was nice having everything available in one place with beautiful artwork to boot.

And really, it’s just so detailed that it’s easy to comb through without getting bogged down, even if you have a tertiary knowledge of the games. It isn’t until page 101 of 146 that you get to the “Darkening of Tristram” event that kicks off the first game, at which point the nostalgia comes flowing in, recapping the freeing of Cain, and the fall of the Butcher, Skeleton King, and the [first fall of] Diablo himself. 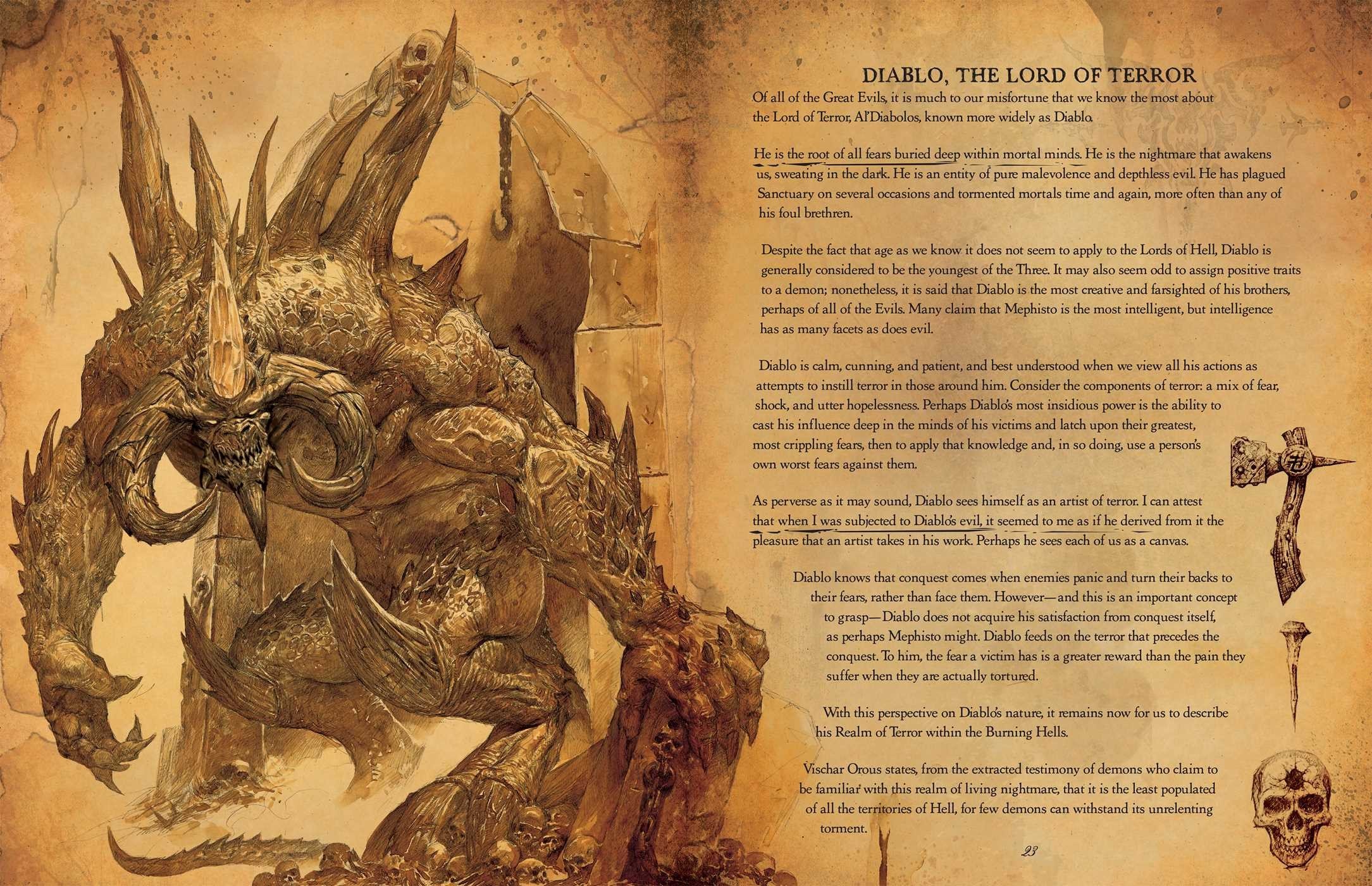 But if you want to get even more granular, go with the Book of Tyrael. Although it has a lot of spillover from lore elements from earlier games (like Adria), this one basically focuses on the events and world of Diablo III. Yet, so much of it is what happens off-screen, because again, there was such little actual story in D3 that a lot of it needs to be explained and setup by way of outside sources. I’m talking timelines, the succession of emperors, real “documentary” type information. Like I said it’s granular, and that might turn some of you off if you couldn’t care less about the latest entry.

But there’s something this book has that Cain’s doesn’t — it’s also written from the perspective of Tyrael, who is a lot less matter-of-fact than Cain, and provides some insight into his life as an angel and his fall from grace into the soul of a mortal. He’s less of a historian and more of a subjective observer, which is something I’ve always admired about the character, and a reason why he’s so popular among fans.

By the time I had finished them, I found something to love about both. I like the pointed flow of the Book of Cain better overall, especially since it gives us context for all of the events that unfold over the course of the entire series — including inevitable future entries. It’s also a great gift for folks who were obsessed with the first and second games, which is quite a few people out there. But at the same time, the writing in Tyrael was more interesting, despite the less interesting subject matter.

If I were you, I’d pick up Cain first and go from there.