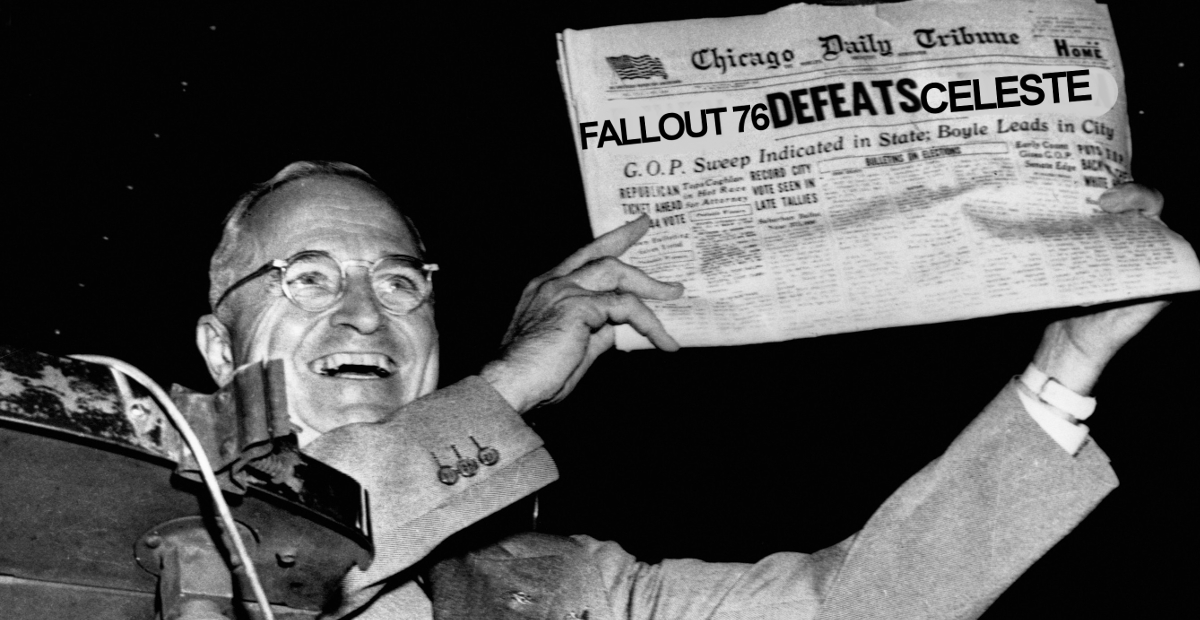 Another year is in the books and what an amazing year for games it was. Across all genres, it seemed like there was a hit for everyone. From AAA releases to indie darlings, there was truly something for all types of players in 2018, and if that’s not a successful year, then I don’t know what is.

With something for everyone releasing in 2018, it’s only right that everyone has their voice heard. That’s just what we did with this year’s community poll. I elected to go with a straightforward voting method as opposed to the weighted vote from last year as the results were the same with either system. So without any further fanfare or game announcements, let’s get right to the awards. 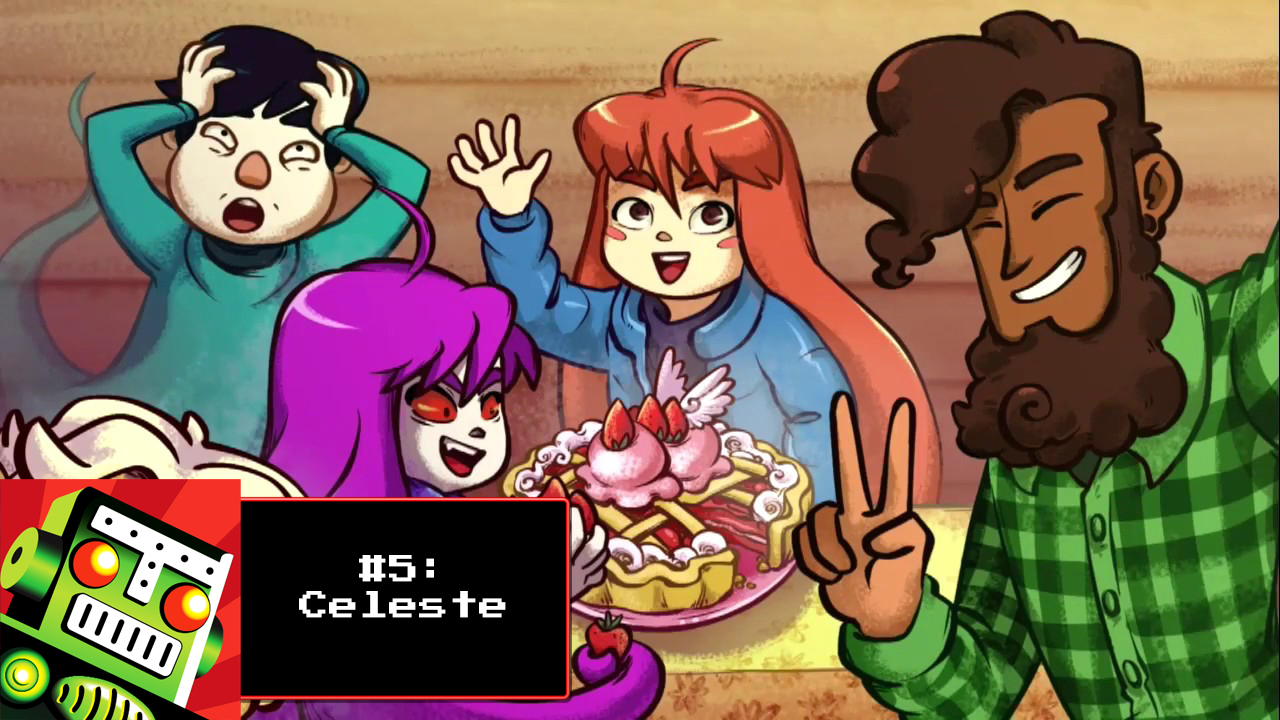 I only just recently started Celeste and while I’m a staunch disliker of platform games, in a very short amount of time Celeste has been able to warm my cold heart on the genre. With a colorful palette, interesting characters, and an inherently relatable story lurking beneath, Celeste is truly the indie darling of Destructoid’s eyes. Those big glowing red eyes…

When I asked one of our resident community fishes about what they thought about Celeste, TheBlondeBass had this to say:

The greatest thing about Celeste, to me, is how every part of the whole works well together. The mechanics are simple, which makes the challenging level design more manageable. The challenging mountainscape works well with its storytelling themes of personal struggles and anxiety. The storytelling themes are reflected well with a soundtrack that really lets the emotions of each scene shine. Put all that together, and you’ve got one of the most fascinating games I’ve played in recent memory. 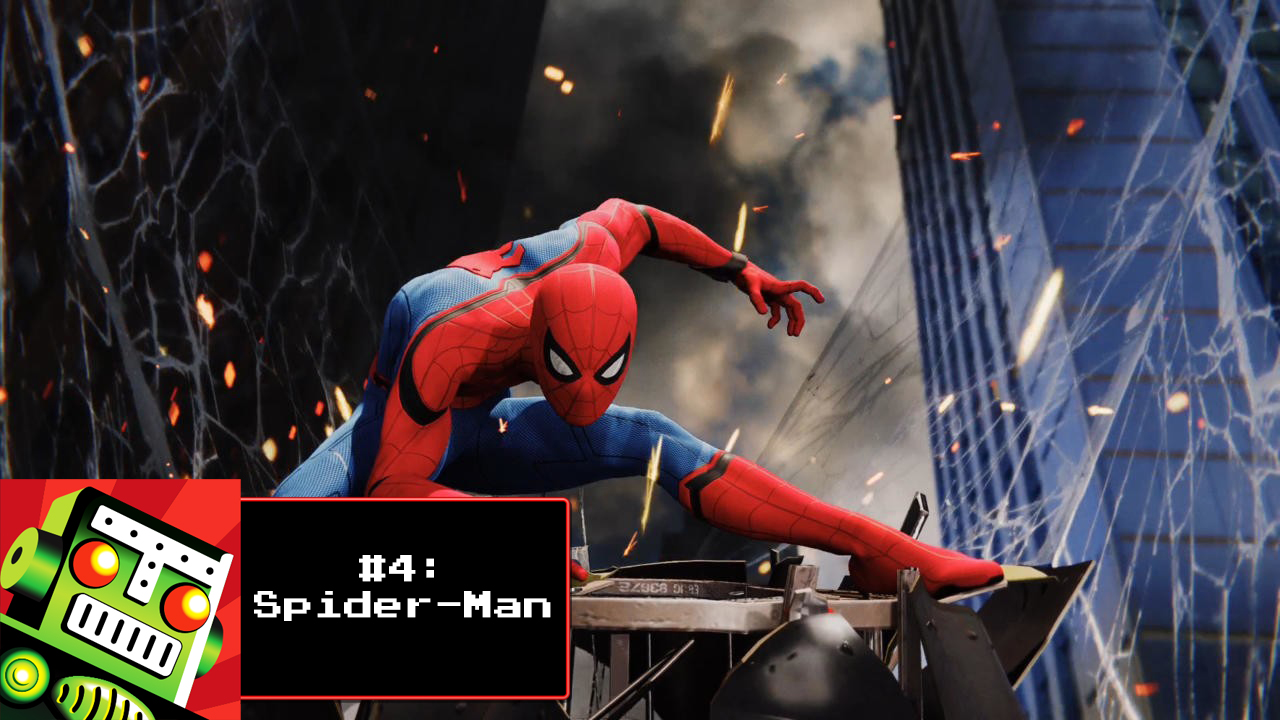 It’s been years since we’ve had an undeniably good Spider-Man game. That has always weighed heavily on comic book fans as what could have been considered the peak of the Spider-Man video game legacy came out for the PlayStation 2 and was an adaptation of a movie at a time where movie adaptations were almost always garbage. It also seems like it has been years since Insomniac revealed its take on Spider-Man, and while it was only announced at E3 2016, it suffered a delay from its original planned release date in 2017 before ultimately landing in 2018. It seems then that the wait was worth it.

I pulled our resident community manager and giver of contests Wes Tacos out of his vat of prizes just long enough for him to sing the praises of the fourth-best game as voted by the community.

Finally, an open world game that has a completely and totally justifiable open world! Spider-Man’s city is frankly flippin’ huge, but it doesn’t feel like it because the game is just so damned good in motion. Web-slinging has never felt better; you have near total control of Spidey’s web-based acrobatics, and man the game is just a joy to play as a result.

The combat is fluid and fun, and they really worked to make the story something personal and meaningful while retaining all of the big, explosive events that comprise Peter Parker’s day-to-day lives. I couldn’t tell you the last time I’ve been able to sit down in front of a TV for six straight hours playing the same game without getting bored, frustrated, or just wanting to do something else. If for no other reason, Spider-Man is truly a marvel for its commitment to fun. 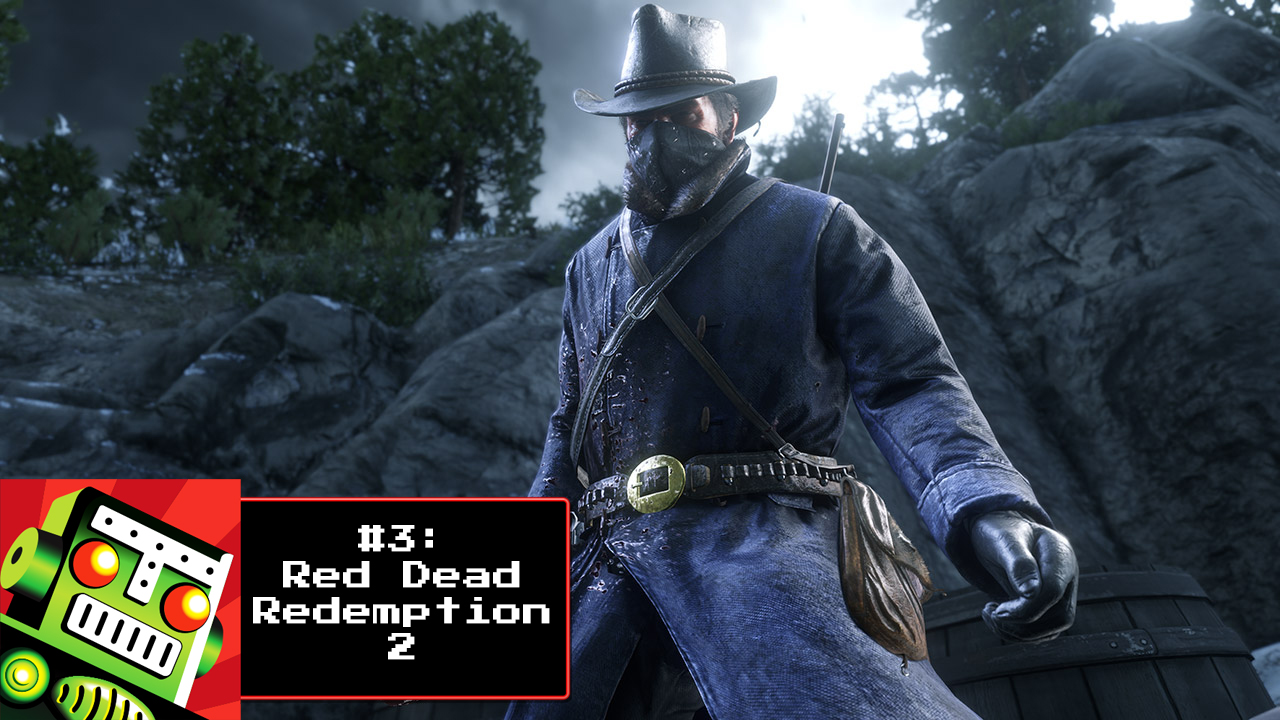 I’ve been a fan of western movies for as long as I can remember, and while Red Dead Redemption was good, it left me wanting something a little slower-paced to give the feeling of being out in the west as opposed to a reskinned Grand Theft Auto. By every account of this game, be it through praise or complaint, it seems that Rockstar has taken the word of western fans to heart. I can only hope that the rumors of a PC port happening come true because from what I’ve seen and heard, it is one of the best open-world games to ever come out.

You want a quote about the merits of Red Dead Redemption 2? Here you go, straight from Marzano’s mouth:

Red Dead Redemption 2 has done the impossible: it has made me jealous of a game that has yet to come to PC. I can usually wait out an inevitable port but the sheer scope and style of Red Dead Redemption 2 is making its lack of release on PC trying. I need it in my PC veins right now. Morricone demands it! 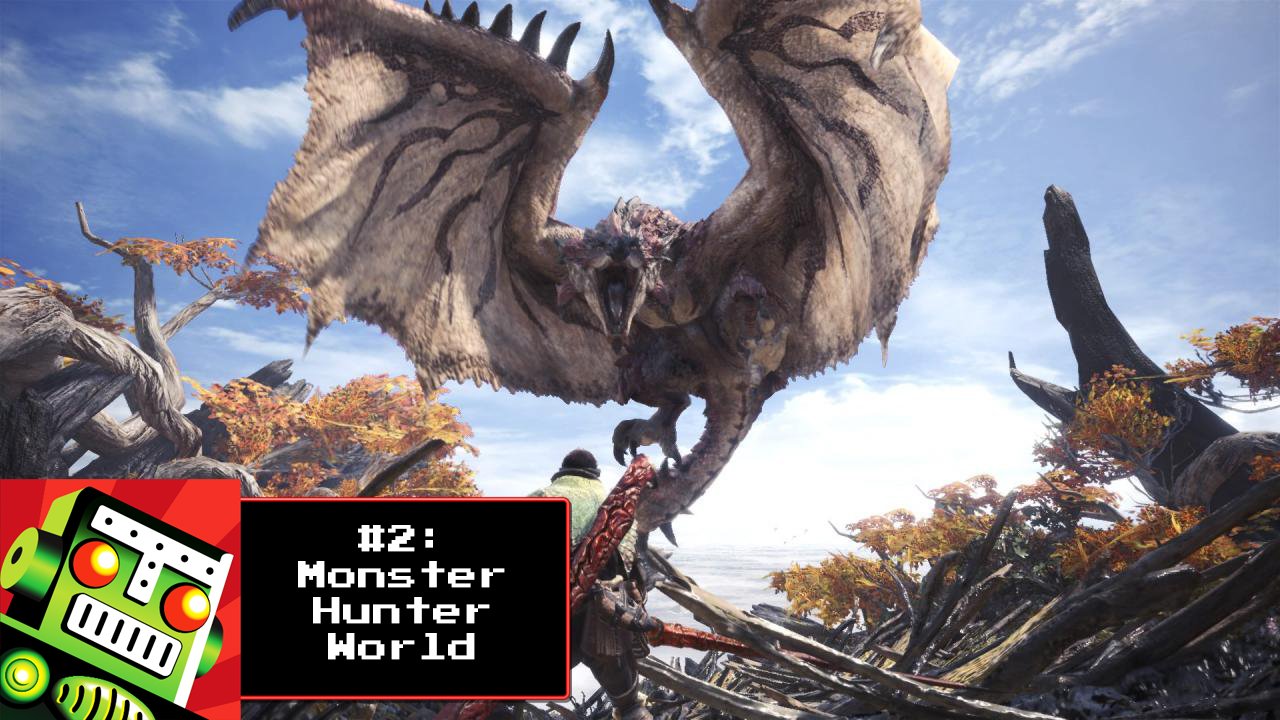 I’ll admit, I’m not the biggest fan of the Monster Hunter series. I tried to love Monster Hunter 3 for Wii U, but I just couldn’t get into it. But I know there is a massive fan base for the series here on Destructoid, so it’s no surprise that second place and the only game in the top five that didn’t win anything from the staff votes is Monster Hunter: World.

While still retaining the same feel and structure of the previous entries, World also brought the storied franchise into the modern era by bringing about quality-of-life improvements. But don’t take it from me, take it from our Community Discord moderator Malthor:

Well, simple as it sounds, monster hunter perfectly nails what it’s named after. It does feel like a hunt, and each monster does feel unique to fight against, not to mention that each weapon type has its own distinct approach to hunting. Monster Hunter: World has taken most of the mechanics from the previous entries and honed them for a console/PC release and added its own things, as not to just rest on the laurels of the previous games. 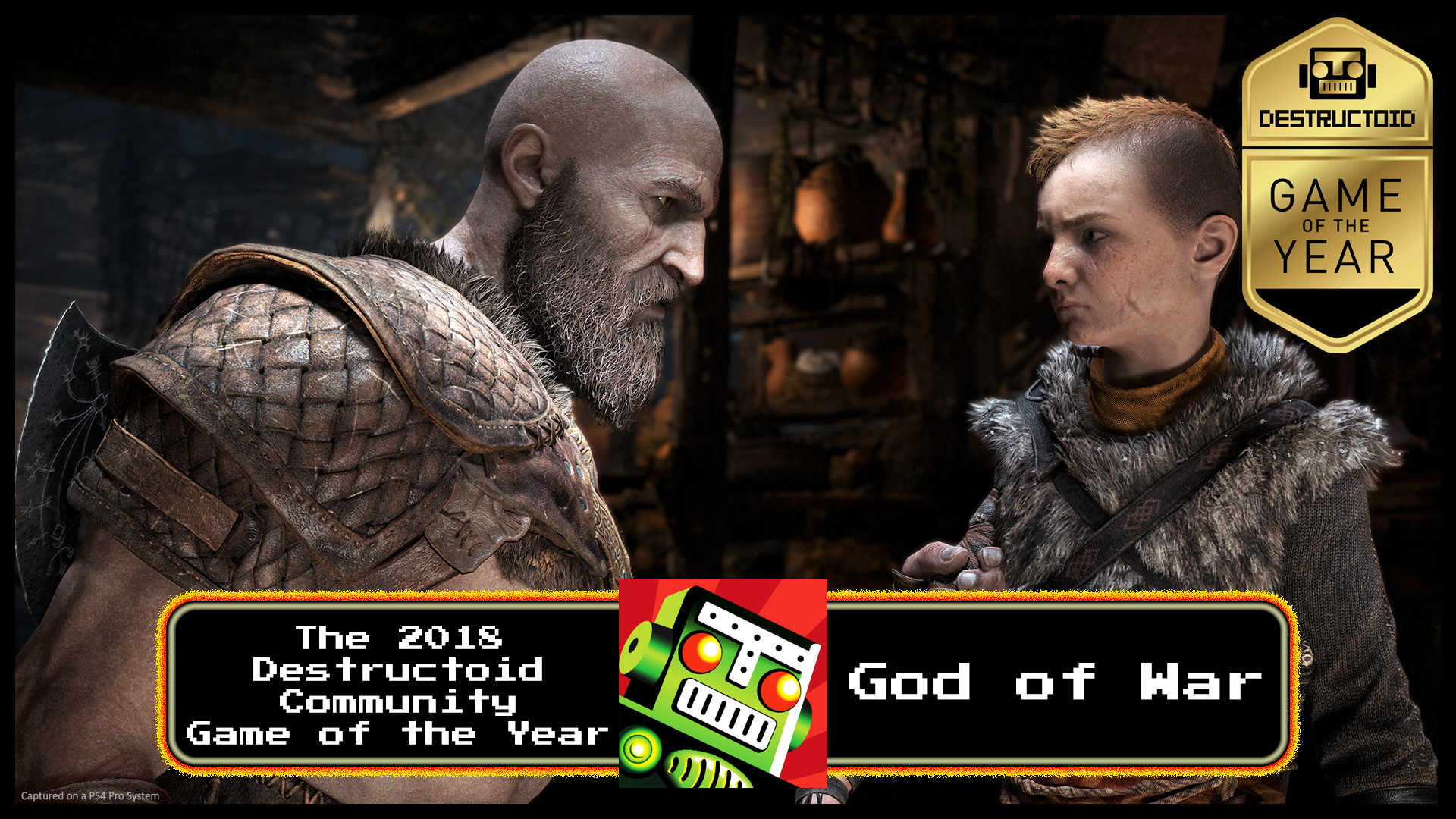 If you were to tell me years ago after the beautiful ending to God of War 3 that Kratos’ story would be rebooted in Norse mythology, I probably would have said it was inevitable. Now if you told me that Kratos would come back and be a reformed man who had put down the blades for a family life and the series would go to a behind-the-shoulder camera and be lauded as one of the greatest games in the generation, then I might have been skeptical.

Hell, I’m still shocked that the game is as well-received as it is currently but between the staff vote and the overwhelming number of votes this got, I think everyone has made their point clear. I need to play this the second I get a PlayStation 4.

Seriously, you folks love this game; it got a whopping 19.9% of the vote. Monster Hunter: World got only 8.5%. It was also the only game to not only get into the triple digits for the number of votes, but managed to bring in over 200 votes total. Crazy! I stopped our community manager Occams on his way to cleaning his litter box for his 20 cats when he praised God of War for:

Showing the power of narrative in gaming and did what I thought was impossible; it gave Kratos a soul. Seamlessly blending story and gameplay, God of War shines as an example of the what video games are capable of.

For those who are interested in the hard numbers, these are the top 25 games voted for including write-ins. Yes I know the borders are weird, OpenOffice wasn’t playing nice. 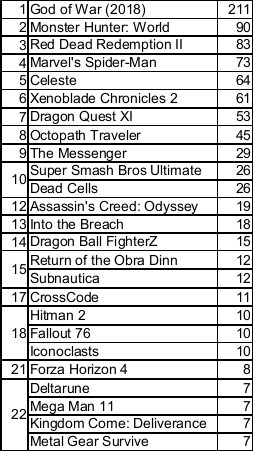 I think the thing we should all take away from this vote is that Into the Breach got more votes than Fallout 76, and I consider that a net positive. Although, I don’t know what confounds me more: Led Zeppelin getting four votes or Metal Gear Survive getting seven. I shall ponder this going into the new year while awaiting The Outer Worlds and the chance to allow you the community to have your voice heard. Happy new year Destructoid and continue being the greatest community in gaming!