Deadpool has been a favorite of mine ever since I got into Marvel comics years ago. So I was pretty delighted when High Moon Studios announced it’d be working on a Deadpool game. The studio has done a rather good job with the Transformers license, and for the most part Deadpool: The Game is pretty decent based on what I got to play recently.

Basically, imagine DmC’s combat mechanics, but just not as polished. Don’t get me wrong, I liked my time with Deadpool and know I’ll enjoy the game when it’s released, but I think you’re going to have to be a Marvel fan in general to appreciate this one.

Deadpool comic writer Daniel Way is behind the game adaptation, which sees the Merc with a Mouth get sucked into a conflict that involves Mr. Sinister taking out the X-Men and putting the Earth in danger … or something. Cable time travels from the future to the Genosha level and tries to warn Deadpool of this dire news. Deadpool’s not really paying attention, and gets so bored that he begs the player to shoot himself in the head. So, uh, you shoot yourself in the head!

There will be many Marvel character appearances, and you’ll run into Cable later where you’ll immediately motorboat his chest thanks to one of Deadpool’s many delusions making him see a large-breasted female saying she’s his number-one fan instead. Other characters you can expect include Wolverine, Domino, Lady Deathstrike, Archlight, Blockbuster, Vertigo, and more. They’ll even be introduced in cool ways — in the case of Cable, you’re presented with a montage of Cable’s appearances in comics all while a song plays that includes the lyrics: “Who the fuck is that? He’s a man out of time! Who the fuck is that? He’s fucking Cable!”

Deadpool is an expert with any weapon, and you’ll have a variety at your disposal. Melee wise, you’ll have swords, sais, and sledgehammers. As for guns, expect pistols, machine guns, laser guns, and shotguns. You can swap between all the weapons in real time via the d-pad, and yes, all the weapons come in pairs, even the shotguns. You also have throwable weapons like grenades, mines, and bear traps. Plus you’ll come across some oversized weaponry that you can use for a limited time like a giant chaingun.

Using light and heavy attacks with the melee weapons is accomplished through two of the face buttons, while the triggers will be used to shoot your guns. Each of the melee weapons has four different types of area-of-effect attacks, and pressing the left bumper with one of the face buttons on the Xbox 360 controller will trigger this attack. One such attack has you spinning around on the floor with your swords like you’re a break-dancing tornado. These power moves have a meter associated with them, and will need to be recharged before they can be triggered again.

When I saw Deadpool at gamescom, I was worried that the combat system wasn’t going to have that right feel — everything seemed a bit floaty. That’s not a concern anymore, as the combat feels great. It’s super easy to chain together different attacks, and it’s pretty fluid bouncing between guns and melee weapons. What makes it really fun is the little teleport move where you can clear small distances in the blink of an eye. It’s essentially an evade move, and blends in well with the fighting mechanics. 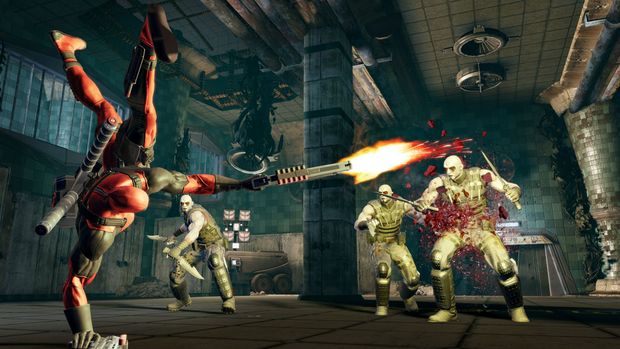 While combat feels great, I’m worried the game may be a little too easy. Granted, the demo I played had Deadpool and all his weaponry pretty much leveled up like crazy, so I imagine it will be a little harder in the beginning. I’m just mostly concerned there won’t be a lot of depth when it comes to the enemies. Yes, there’s an assortment of different bad guys but I don’t see them offering that much of a challenge to players.

My other main concern with Deadpool is the camera. All throughout the demo I had to babysit the camera via the right analog stick to give me the best view of the action. It’s not a deal-breaker; it just doesn’t follow the action all that well and is something that might frustrate you in the beginning at least.

As for Deadpool himself, I was rather impressed with his writing. Deadpool and the two other personalities in his head are constantly talking, and a lot of the stuff he does and says is pretty funny. Not really a fan of Nolan North’s voice acting; granted, I’m just tired of hearing the same sounding voice in so many games at this point.

All in all I think Deadpool: The Game is going to be worth playing. Gameplay is fun but shallow, the visuals are nothing to be amazed by, and you’ll most likely forget you ever played this one when it comes time for all of the end-of-the-year festivities. Honestly, you may even want to wait for a sale or some kind of deal despite the lower price point. Still, I think it’s going to be worth the ride and these issues that would hinder other games feels kind of right at home with something like Deadpool.