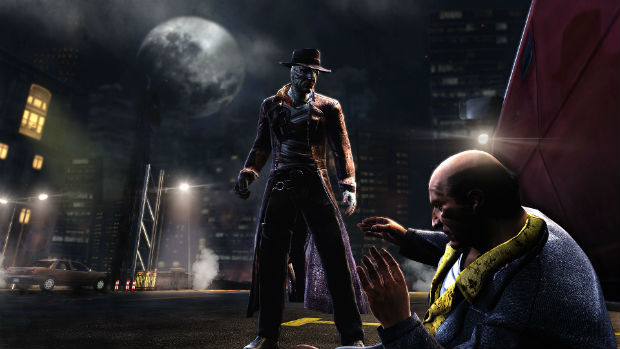 The Dark Phantom is a neo-noir comic-book influenced third-person shooter about a man calling himself the “Dark Phantom” as he hunts down criminals across the city. Sound familiar? The Dark Phantom is reminiscent of Rorschach from Watchmen, with his trench coat, bandaged face, and fedora. His views, morality, and mission seem to be in alignment with Rorschach too.

You’ll control the Dark Phantom through rooftops and back alleys, engaging in intense shootouts with the denizens of the city. The game will feature a cover-based system, destructible terrain, and a “Bullet Tag” system like Red Dead Redemption’s Deadeye mode.

The Dark Phantom is close to its target release date of November 2014, but the team at Pardis Game Studio needs more funding to put the finishing touches on the game. Any additional funding will be put toward improvements to environmental destruction, more guns, more enemies, better voiceovers, and ports to Mac, Linux, PS3, and Xbox 360.

Right now the game is going for $15 with a Kickstarter pledge, with plenty of incentives to donate higher.

Neo-Noir Shooter The Dark Phantom Has Shades Of Watchmen [Siliconera]