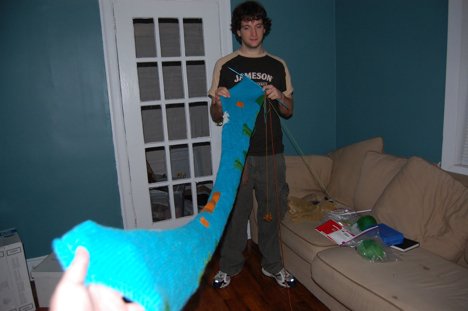 This is just bloody brilliant, as the British would say. The fact that this hasn’t been done sooner (to my knowledge) is unbelievable. I can’t wait to see the end result of the World 1-1 scarf. This makes me want a shark scarf now. Speaking of sharks, has anyone seen Pineapple Express yet? I want that shark shirt from the movie.

Nick talks about some XNA games to keep an eye out for, I preview Mushroom Men and a bunch of KOEI games, the Top Spin 3 contest gets extended, everyone is afraid of GTA, and plenty more happened on Friday.

Contests:
Top Spin 3 contest extension: I said ‘balls deep,’ not ‘just the tip’
The most jawdropping SoulCalibur cosplay in the world: We have our winners

Galleries:
New dirt on Rise of the Argonauts: soundtrack info and new screens

Trailers & Videos:
Producer walks out of a portal in second behind-the-scenes Legendary vid
This Call of Duty: World at War co-op footage may pique your interest

Offbeat:
I would burn down a convent for this scrap metal Big Daddy sculpture
Street Fighter Online puts a… special item in the store
Knitting the Mario Scarf